Burberry Prorsum, Antionio Berardi, Osman – these are just a few of the designers showcasing their creations at London Fashion Week today but who will also find their names on another, less flattering list – of designers who consistently use one or no models of colour in their runway shows.

The London list of designers joins ones for Paris, New York and Milan compiled by Balance Diversity, a campaign for greater diversity on the runway spearheaded by Bethann Hardison, the former model agency owner, and supported by former supermodels Iman and Naomi Campbell, who told Channel 4 News: “I’m saying the act of not choosing models of colour is racist.”

A letter sent to the British Fashion Council and their international counterparts said: “Eyes are on an industry that season after season watches fashion design houses consistently use of one or no models of color. No matter the intention, the result is racism. Not accepting another based on the color of their skin is clearly beyond “aesthetic” when it is consistent with the designer’s brand. Whether it’s the decision of the designer, stylist or casting director, that decision to use basically all white models, reveals a trait that is unbecoming to modern society.”

If the letter was blunt, I was struck by the trio’s interviews on American TV, in which they bent over backwards to stress that the campaign was “not about shaming” designers and “not calling anyone racist”, but stating that “the act itself is racist.” In her interview with Channel 4 News, Naomi Campbell said they were “passionate” about the issue rather than angry, while Hardison said that she thought the designers were “ignorant and arrogant” and that their actions were the result of laziness more than anything else.

Their careful approach actually serves to underscore what they’re up against. The fact that they have to be careful not to be seen as labelling anyone as racist for perpetrating a racist act shows that white privilege is alive and well not just in the fashion world but the media too. Institutional racism is always insidious and hard to pin down but if the act is racist, someone with a prejudice (and they may not even be aware of it) is perpetrating it. But in order to be taken seriously, the trio realise bitter pill needs a spoonful of sugar. Another sweetener: they’re passionate, not angry – the dismissive comment usually made of Black Women when they assert themselves. Hopefully, having dispensed with the preliminaries, Hardison, Campbell and Iman will be able to focus attention on what really matters – diversity on the catwalk.

In a written response to the letter, the British Fashion Council stated: “While the British Fashion Council does not organize model castings for London Fashion Week, as its governing body, we assert that all participating designers should recognize that London is one of the most multicultural cities in the world and should consider reflecting this demographic at their shows and presentations.” True, but it misses the point: models of colour should be booked on merit, not for PR or to reflect the host city. That’s the sort of tokenism that sees some designers booking one or two models of colour to tick the box and overlooking the fact that their artistic vision is blinkered.  The nub of the issue is, who makes the casting decisions and on what grounds?  Naomi Campbell nails it: “They hide behind aesthetics.” If your artistic vision cannot see beyond race, then I would argue that it’s an impoverished vision.

I suspect that the question of how to effect change on the catwalk is similar to discussions about the lack of diversity in television shows; things have to change behind the scenes too: more designers of colour, more producers, artistic directors and industry buyers. Diversity means getting more models of colour on the catwalk, and, further still, a variety of body shapes and sizes. Some African designers, for example, are often hamstrung by the need to design for the European silhouette, which is the market and industry default, when looking to sell internationally. For an industry that’s meant be artistic, the narrow confines of race and silhouette seem to betray a marked lack of imagination. 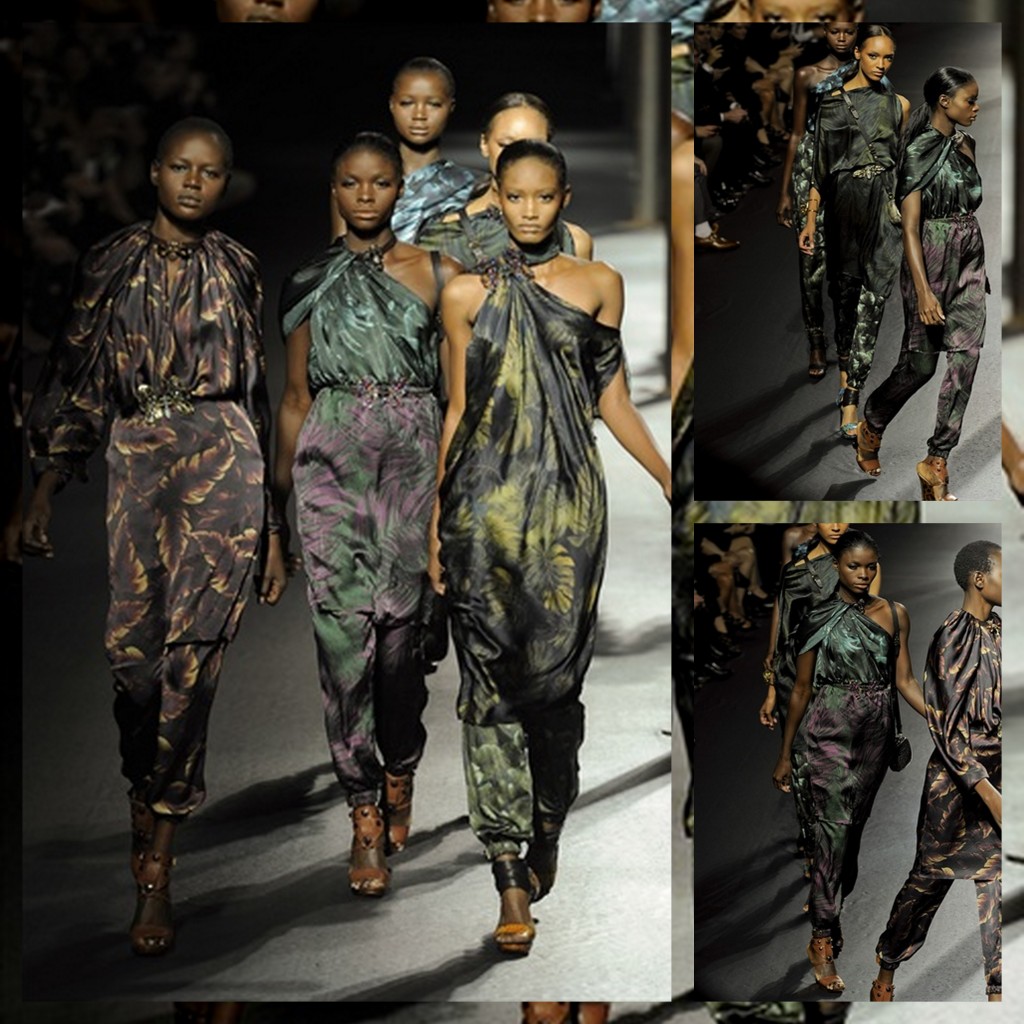 6 thoughts on “Racism on the Runways”