I find summers a difficult time. Most people struggle in the winter with Seasonal Affective Disorder but, for me, it is the summer. 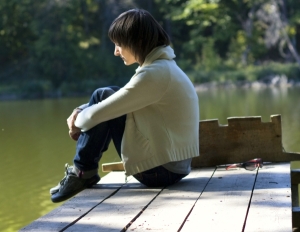 could be because three summers ago my mental health deteriorated quite seriously and, for the first time in my life, I was unable to take care of myself. I pride myself on being independent and self-sufficient so this was – and remains – a deeply frightening prospect.

Summer can also be a lonely time: friends go off for summer holidays with their children; the annual festival of Eid will take place soon which people spend with their families and I have long been estranged from my family. Loneliness is the beast on my back. It is a difficult thing to speak about because it isn’t cool to be lonely: it smacks of neediness or some sort of defect, but loneliness haunts me.

Last summer I was flailing again. And it was the kindness of a woman on the other end of an NHS Direct line and a very sympathetic paramedic which helped shift some of the self-loathing and disgust that I have to contend with in my darkest hours.

I was reminded again about fighting for survival in a different context as I watched Starred Up, a violent, macho, painful film set in a prison in London. Jack O’Connell, as Eric Love, gives a majestic performance as the angry, canny, broken, abandoned prisoner fighting for survival. The back story makes clear that he has been conditioned to be this way coming from a care home and surviving abuse.

Within the first few scenes he “accidentally” attacks anther inmate. The prison guards come after him and he attacks them with ferocity, ending by having one of the prison guards’ balls quite literally in his mouth. He needs no weapons: he has learnt to survive with the bare minimum he has at his disposal.

He is later given a place in group therapy which particularly interested me as I am just completing my first year. I am very interested about the depiction of group therapy in film because I have not yet seen it done in a way which captures the intensity of managing intimate relationships including the solidarity it can bring as well as the inevitable conflict.

Elsewhere, I have written about how accurate My Mad Fat Diary is in its depiction of mental illness but I have struggled with the way it portrays group therapy because it is not structured correctly and boundaries are repeatedly blurred between the therapist and the participants. I want people to understand the journey people with a mental illness go through so the errors irk somewhat.

But in Starred Up we do see the intensity. We see a parallel struggle for control and understanding between the therapist and Eric. 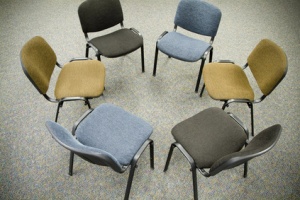 Eric is pushing his buttons, goading him into a reaction but the therapist must wrestle with this and focus it back to client. The group therapy scenes always seem to be on the brink of an explosion, either emotional or with physical violence. Eric has no role model of managing intimate relationships; his father left him and, when they meet in prison, the relationship begins with violence underpinned by Eric’s longing for acceptance.

In the group therapy Eric is able to begin to navigate some of these emotions and there is a journey of sorts. Eric slowly moves from someone lashing out at anyone who might provoke him, to someone that learns, very slowly, to feel his anger, process it but not react with violence and destruction. One scene where we see the therapist help Eric to “just stay with it” (feeling angry without reacting) seemed particularly accurate.

When I think of how group therapy can work well, I often think that it is about developing the ability to navigate the emotions that come with intimate relationships and learning to trust. Starred Up begins to show this where many have failed. I found myself: a middle class, British, Asian, Muslim, woman relating to Eric: a young white boy, incarcerated for most of his life, full of anger and violence, fighting for survival. That was something I did not expect.

Media Diversified is a 100% reader-funded, non-profit organisaton. Every donation is of great help and goes directly towards sustaining the organisation

One thought on “Loneliness, anger and learning to let go”