A young woman sits in front of the bank manager, her distress is palpable with tears streaming down her face; her voice comes out in desperate gasps.

“Please don’t call the police; I can’t explain how awful things will get.”
“They have broken the law, I have no choice.” He responds.
“Please, please, please, don’t.” She is almost incoherent with distress.

The bank manager appraises her. She had come in this morning to relay to him that her bank cards had been fraudulently reported stolen by her family. The young woman had fled a forced marriage and her family in their rage had retaliated. He agrees to not report them and the young woman looks visibly relieved.

This young woman was me ten years ago. I recount this experience to give a glimmer into what it is like when you are fighting for survival. When all you want is your safety and the thought of police intervention fills you with horror.

Governments like symbolic gestures: a big summit to end sexual violence in war zones with a Hollywood star at the helm or the passing of a law to criminalise forced marriage. Sometimes symbols matter, other times, symbols are a lot easier than tackling the complexities of a problem. I was reminded of this as news came through this week that forced marriage had been criminalised by the coalition government; it is a law that fills me with dread.

Dread because I have serious concerns as to whether it will protect victims at risk. A person fleeing a forced marriage has been under extreme emotional pressure to comply and the prospect of taking their family to court, where the maximum custodial penalty is seven years, can be an overwhelming prospect. So much so, that it could prove to be a deterrent in asking for help. The cultural context in which these situations arise, where misogynistic notions of honour prevail, make leaving that much harder. 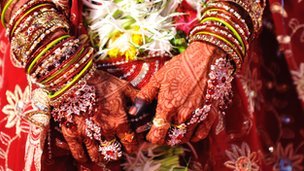 A law would not have helped me get out sooner and nor would it have been a deterrent to my family. Kidnap, false imprisonment and rape are all criminal acts but if they have not stopped women and boys being forced to marry against their will, then what is the rationale for a new law now? Symbols only work if there has been work on the ground to provide the necessary support to victims and survivors.

It is not sexy to provide funding to women’s services. It doesn’t get you the headline of sharing the platform with a Hollywood star. It is not sexy to teach relationship and consent in schools or to train teachers, GP’s, UKBA to spot the signs of a forced marriage. It is these things that will make a tangible difference and even save lives.

Passing a law is a quick win but at what price? There is a real chance that this may force the issue underground. Forced marriage is already hugely under reported; the Forced Marriage Unit reported that they gave advice or support related to a possible forced marriage in 1302 cases between January to December 2013. I suspect this is a tiny snapshot of the real picture. There are many boys and girls that flee and sleep on friend’s floors, they learn to survive and work and carry on. I know I did. All I wanted was my life back and a bed without a stranger, a room to call my own again.

So my message to Theresa May and David Cameron is: I really hope you will be backing your symbolic gestures with the effort needed on the ground to protect those people most at risk.

3 thoughts on “Criminalising forced marriage: The risk of symbolic gestures”