In the wake of the Sony Leaks and the Annie reboot starring Quvenzhané Wallis, the Black Bond debate and questions of representation have received renewed interest. A Sony executive expressed the desire that the phenomenal Idris Elba, the Golden Globe and Emmy-nominated black actor known for his nuanced and brilliant performances, be Daniel Craig’s successor. Much of the dissent, however, has come from people who fervently believe that Bond’s whiteness is somehow central to his character’s identity, and thus to recast him as black would be a gross act of cultural erasure. 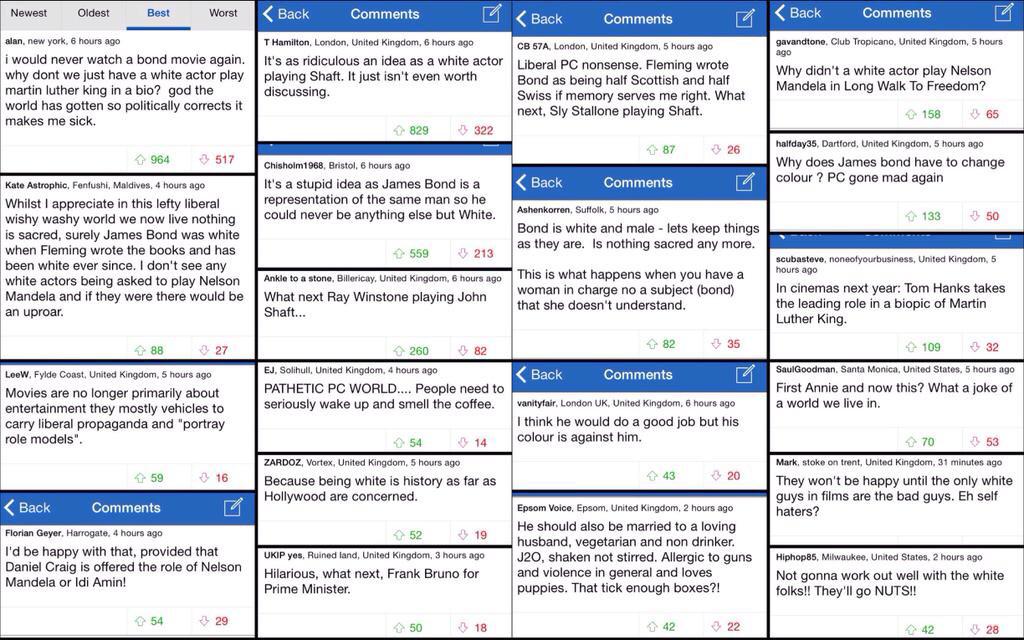 White online commenters such as those on the Mail Online have once again shown a distinct lack of self-awareness. Bodies and faces like theirs have played the hero in movies for so long, that it is unimaginable to feel themselves thrust from the driver’s seat. It is false to suggest that the recasting of bond as a black man is the same as whitewashing Shaft (a subversive response to the typical white hero), or real historical figures, such as Idi Amin and the frequently cited examples of Martin Luther King and Nelson Mandela whose blackness was central to their struggles and to historical perceptions of them. Few take the time to interrogate why bond must be white, simply stating that he is, and has always been. Bond’s whiteness never denoted anything other than his privilege and his appeal to white neutrality that pervades all aspects of our society.

Commenters frequently and zealously defend controversially whitewashed castings like those of Ridley Scott’s Exodus citing as he has the unmarketability of leading men that are ethnically diverse. This cynicism about Hollywood’s financially motivated casting system is a particularly bizarre excuse that defends everyone from directors to casting teams – a system that only comes into action when a character of colour is written out of a movie (often historically revisionist) in favour of a white one. There is no systematic opposition to Hollywood erasure, the implication being that capitalism is so intertwined with white supremacy, such that only when our legacies as people of colour are erased are movies rendered profitable. Radical reimaginings of characters such as James Bond are necessary when you see that Hollywood has historically and still does have a problem casting people of colour, even in roles that call for them. Blake Edward’s regrettable employment of Yellowface where the casting of an East Asian actor would have sufficed is a painful blemish upon his singularly beautiful adaptation of Breakfast at Tiffany’s. Even Star Trek’s iconic villain was in the original series conceived of and executed as Sikh, and yet is played by Benedict Cumberbatch in the recent reboot. The limited public outcry is particularly telling in comparison with the widespread Black Annie dissenters, despite the fact that African American and Native American children represent double the percentage of the foster care population than they do in the general child population.

Our bodies and our realities become mirrored in characters that we might empathise with. In a particularly poignant moment, popular YouTube user Glozell broke down in tears when she saw a black princess at Disneyland, because when she was a child she didn’t think that little black girls could be princesses. Representation can be a force for good used to give young people access to powerful role models that highlight our potential, and our ability to self-fashion, and be badass game-changers. Misguided, stereotypical gestures at representation are devastating to watch and have serious impacts. People of colour are not here to be your sassy black friend or Asian sidekick, not here to be tokens or props for white saviour narratives. People internalise the representation that is thrust upon them. If representation is the lens through which we open endless possibilities for our youth, it can also be the eraser through which our bme peoples and histories are reduced to nothingness. Pornography, which is an increasing way in which young people learn about sexuality has a race problem that is rarely discussed, in which black people rarely move beyond the realm of fetish.

Franz Fanon famously wrote that when black men are sexualised in society, we are reduced to nothing more than penises and hypersexualised caricatures: a perverse kind of body politics we have seen unfold in public obsession with Idris Elba’s bulge. Black men in pornography are often dressed in sagged jeans and do-rags; storylines unfold with tropes of drug dealers and violent sex, and it is always a primal, loveless event. We are hood-rats and gangsters, do-ragged and snapbacked, lascivious monster-cocked thugs, always ready to channel our inner Othello. Our lust is marketable, not our love. If the heat and the warmth of love is what gives us humanity and value, then in the face of all this terrible representation how do we convince ourselves that our lives and our loves are worth something?

Representation matters. Nuanced and genuine representations humanise us. Trans women of colour face epidemic visitations of violence. When Laverne Cox stepped onto our screens there was the sound of Cece Mcdonald’s cell door swinging open and the promise of futures without violence upon queer people of colour. Representations have the power to liberate us. Cox’s critically acclaimed Sophia Burset in Orange is the New Black is another portrayal that serves to dismantle the hypersexualised, hyperviolent portrayals that generate violence, and ultimately put black bodies in the ground.

Superheroes, intrepid explorers, genius inventors and superspies represent ‘the best of us.’ They are the brightness of what we are and might become. In the gaps and contradictions between them and their villainous counterparts is the beautiful possibility of freewill and ability to choose our own paths. To lose this tension is to lose the edifying bits of film and television – those that tell us we are not born good or bad, but that there is no fault in our stars: we can make and unmake ourselves with determination and effort. When all we see are caricatures of ourselves, how do we understand that our bodies are capable of anything other than being subjugated? James Bond as a character sparkles in his imperfection: borderline alcoholism, unnecessary brutality, rampant misogyny – but his imperfection is complex, and Bond a suave reminder that the best of us might possess many a bad bone, and still save the day. To recast James Bond, a fictional character and symbol of British resilience, sexual desirability, and charm as a man of colour would be a radical move in a society where black men and women only win Oscars for playing maids, slaves and objects of white salvation.

Otamere Guobadia is a law finalist at University College, Oxford. Activist, former editor of Oxford based queer and trans publication, No HeterOx and President of the Oxford University LGBTQ society. He hopes to one day ‘speak French, have roses and apologise to no one.’ @otamere and queer photography blog intheimageandlikeness