Between Sudan and Egypt lies Bir Tawil, an area which is simply desert, rocks and mountain under the scorching sun. Both states neither claim nor desire Bir Tawil, preferring to focus upon their dispute over the nearby territory of Hala’ib which is situated by the Red Sea. As with many regions which more than one state lay claim to, the interest in Hala’ib and disinterest in Bir Tawil are a result of two different treaties drawn up by the British while they were getting their kicks out of colonialism.

Without delving too much into history, in 1899 the Anglo-Egyptian Condominium established a joint British-Egyptian rule over Sudan (in reality the British were running the show). Under this treaty a straight border between Sudan and Egypt was drawn. However, in 1902 the boundaries were amended by the British. The 1899 split places Bir Tawil in Sudan and Hala’ib as part of Egypt; the 1902 version does the exact opposite. With both states having a greater interest in Hala’ib, Egypt claims the 1899 agreement while Sudan argues that the 1902 amended boundary markings stand.

Whilst one could write an entire article on the borders so carelessly and callously drawn up by former colonial powers and the many bloody consequences of this, the focus of this article is about why Bir Tawil made headlines last year and once again this week.

When I was 5 years old I decided I wanted to be a princess and wandered around the house pretending I was of royal stock (paper crown and frilly dress in tow) and was desperate for my very own castle, kingdom and of course prince. Whether ideal or not, the princess dream is one many kids have, so I was not surprised to read that 7 year old Emily Heaton turned to her father Jeremiah and asked if she would be a real princess one day. His response, however, did surprise me.

Based in Virginia, Heaton decided to do some research and found that Bir Tawil is one of the few remaining parts of the world which is ‘terra nullius’ – i.e.land belonging to nobody. So he packed his bag and, upon arriving in Bir Tawil, dug into the sand a flag made by his children, his way of laying claim to the territory of which his daughter Emily can be a princess. 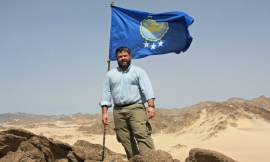 Heaton stated that the area is to be known as North Sudan and he hopes to do some good with it. An article on Al Jazeera stated that Heaton ‘has formulated wildly ambitious plans for the Kingdom, the creation of a state of the art agricultural research centre – which he hopes will solve world hunger.’

So, do we get a collective ‘Awwwwwwwwww’? Are you touched at this story of the love of a father and the lengths people go to for their children? Impressed by the good he plans to do with this piece of land which he has continuously stated is neither Egypt nor Sudan?

While on paper some may have been enamoured by the lengths Heaton was willing to go to for his daughter and his ‘good intentions’, the reality is, a white man claiming land in Africa is nothing new and it certainly isn’t cute.

In simple terms, a white man travels to Africa, discovers land and lays claim to it? I think you may find that is called colonialism.

Of course he was quick to dismiss any comparisons made to colonialism, stating, ‘What I am doing is the exact opposite of colonialism. The dictionary defines colonialism as one country taking control of another to exploit its resources or people. What we’re doing is designed to improve peoples’ lives’.

And then came the tiresome ‘I don’t see race, colour, or creed’.

While he has been continuing to lead his campaign for recognition via authorities, African Union and a Crowdfunding campaign, Walt Disney Studios and Morgan Spurlock announced in November 2014 that they will be developing a film based on the story called The Princess of North Sudan.

They better be the villains… 😒 https://t.co/XvNP37hMg4

@WritersofColour So, white folks taking land from the Africa that they took us from & then taking control of the narrative. What a surprise

A surge of outrage across social media occurred when details were revealed about the film. ‘The first African princess is to be white?’ argued many. What also came to mind were the racist undertones and treatment of people of colour in many Disney films. Aladdin is a prime example; the dark skinned villains have a thick accent, a merchant threatens to cut off Princess Jasmine’s arm, there are belly dancers all over the place and the original opening song featured the lyrics ‘Where they cut off your ear/if they don’t like your face/ It’s barbaric, but hey, it’s home.’ As said by writer of Reel Bad Arabs Dr Jack Shaheen, ‘Disney’s Aladdin recycled every old degrading stereotype.’

Other examples as documented by Time Magazine include the villainous cats in Lady and the Tramp being portrayed as Asian; and the whitewashing of Pocahontas, a film in which the words ‘savages’, ‘heathens’, ‘primitive’ and ‘civilised’ are often used and the portrayal of Native Americans and their history is distorted. The reinforcement of stereotypes and racist attitudes can also be found in the ‘crows’ and the workers featured in Dumbo, the depiction of Native Americans in Peter Pan (the horror that was the song ‘What Makes the Red Man Red’), and the centaur in Fantasia. It goes on an on.

These are just a few examples of the countless times Disney and Hollywood have used stereotypes, whitewashing and the presence of white saviours.

Disney has a history of ‘othering’ and one can be sure that in the Princess of North Sudan any non- American characters will be invisible extras, possibly subservient and certainly not equal to the ‘princess’ and her father. A story set in North Africa where the North African characters will be ‘helpers’, maids, some stereotype knock-up belonging to voiceless nomadic tribes.

Scriptwriter for Princess of North Sudan Stephany Folsom responded to the criticism via Twitter, stating, ‘There is no planting a flag in Sudan or making a white girl the princess of an African Country. That’s gross.’

Well, Disney and Spurlock brought rights to a film about a white man going to a part of Africa where he planted a flag and claimed a piece of land for his daughter to be princess of. Forgive us for thinking that this was what the film was going to be about.

Let’s remember the first Disney film to ever be released was Snow White in 1937; it’s taken them this long to invest in making a princess film set in Africa and they choose to adapt THIS story for the big screen?

A little history lesson here. Kings and queens have existed for centuries in what is now known as Africa, so where are Disney when it comes to telling the story of Queen Nzinga Mbande or Princess Yennenga? Even if by some stretch of the imagination Disney decide to make the characters black, the fact is their first film featuring an African princess is based on the story of a white family, despite the abundance of royal-blooded women whose stories can be found across Africa.

To refer back to Heaton, Bir Tawil may not officially have any inhabitants but it is a place where Bedouins can be seen from time to time. Vast desert, rocks and not much more is of no value to Sudan or Egypt. However, for those who identify as nomads, who do not subscribe to the lines drawn between countries, this is their heritage. Just the fact that Heaton chose a name for the region is already erasing its history!

Overall, the Heaton story reported through a Western lens by the media features a father doing something wonderful for his daughter and simultaneously embarking on a mission to end world hunger and ‘help’ in a random part of Africa. Alongside comes the big screen adaptation aimed at children; art and culture disseminating more messages which ‘other’.

Therein lays the problem with Jeremiah Heaton claiming ‘North Sudan’ and with Disney’s decision to make a film out of the story; the erasure of history and the invisibility of the real narrative in these parts of the world.

While international law experts say there is no way plans for ‘North Sudan’ will develop and the social media response has yielded some pressure on Disney, one can be sure that should both the country and the film materialise, it won’t be a ‘Happily Ever After’ for everyone.

Did you enjoy reading this article? Help us continue to provide more! Media diversified is 100% reader funded, you can subscribe for as little as £5 per month here

4 thoughts on “What fresh hell is this? ‘The Princess of North Sudan; more scary tale than fairy tale’”