I hate the term ‘baby brain’. It feels like an inside joke amongst mothers that uttered by any other person feels patronising. It suggests a certain type of ditzyness due to your brain turning to mush, like being around an infant all day every day somehow mentally incapacitates you. But ‘baby brain’ is not really a thing. Let’s just call gardening equipment by their correct names: we do not have ‘baby brain’, we are exhausted.

This was what I told my friend when she sheepishly apologised for getting birthday dates mixed up. ‘Baby brain’ doesn’t quite cover the fact that she is eight months pregnant with a boisterous two year old to look after and a full time job. While I don’t want to dismiss the domestic contributions of her partner completely, the fact is that generally women still shoulder most of the burden when it comes to running a household, whether that is keeping things like stock levels of toilet paper in mind, or managing the emotional equilibrium of a household. And yes, don’t forget all that cooking and cleaning. 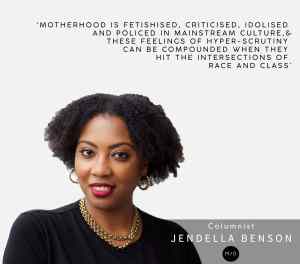 When I tried to explain what motherhood felt like to someone, the only analogy I could come up with was driving somewhere unfamiliar on a dark and stormy night. Imagine the mental energy of trying to follow the sat-nav, while also trying to read road signs, but also aware that you’re driving in dangerous conditions and your hazard perception needs to be at 100% at all times. Now imagine doing that for sixteen hours a day, and then when you sleep at night you’re still on standby for a cry or a cough or the sound a child breaking free and falling out of bed.

When you are permanently functioning beyond capacity, forgetfulness, confusion, emotional wipeout and whatever else are perfectly reasonable side effects. And the fact that it is only in the last five years or so when science has been so gracious to formally acknowledge these things speaks volumes about how little experiences of pregnancy and motherhood are really understood.

Wider attitudes towards maternity only further illustrate this point. Comments made about maternity leave betray the idea that people think it’s some kind of paid holiday, rather than a mad dash to get prepared followed by the disorientating plunge into parenting a small screeching newborn. Then as the months speed by and the realisation that ‘one can not live on Statutory Maternity Pay alone’ creeps in like a cold sweat, there is the stomach-churning return to work, with colleagues second-guessing your capabilities (y’know, “baby brain”) and the constant question: is this worth it? When a third of what you’re earning goes towards paying someone else to look after your child, this is a legitimate question.

But God forbid you’re one of those ‘lazy’ mums, staying at home watching daytime TV or loitering around coffee shops or shopping centres. “What do you actually do all day?” is the question often implied by inquisitive minds, or actually uttered by tactless ones. When asked about the stereotype of teen mums in it for the benefits and free housing, one of the mothers interviewed for my project ‘Young Motherhood’ replied “[Motherhood] is not the life of someone who doesn’t want to work or do anything, is it?”

So let’s address another myth here, this idea that having a child makes you less ambitious. Surveys show that most women are eager to return to work but often find workplaces that are not that accommodating to women with families. While on paper employees are entitled to ask for flexible working hours, I have friends who have been outright denied this option and they dare not ask again. The same issue is prevalent with the despair surrounding young mothers dropping out of school, college, and university, as if staying in full time education is a plausible option with next to no consideration for students with children in many places.

It’s a familiar story: damned if you, damned if you don’t! So it’s no wonder that more and more mums – more of these “unambitious”, “baby-brain”ed mums – are moving towards part-time self-employment. There are around 800,000 of us, if you believe the Office of National Statistics, and the top reason cited increasing numbers is the desire for a lifestyle that doesn’t pit motherhood against a career. Ambitious women who also want to be around for their kids’ school plays and sports matches? Well that’s the trope of the ruthless, career-driven, absentee-mother dead in the water too…

Motherhood is fetishised, criticised, idolised, and policed in mainstream culture, and these feelings of hyper-scrutiny can be compounded when they hit the intersections of race and class. Despite our relative marginalisation in mainstream representations of motherhood, women of colour have been riding the wave of rule-breaking self-definition for a while. Whether it’s the joyous moment that Ava Vidal spoke eloquently about post-Brexit racism holding her newborn daughter on Channel 4 News, or hijabi mums in Air Max brunching with friends on my Instagram feed, we are out here living our best lives. Motherhood is exhausting, and liberating, and isolating, and fun! It is as multi-faceted and complex as the women who are doing it, and our voices, stories – and social media feeds – are a testament to that.

2 thoughts on “‘Baby Brain’ and Other Myths”