Whiling away an evening playing a casual game of “which director is the most attractive?” (actors who have also directed notwithstanding, Paul Thomas Anderson and Ryan Coogler are my answers for those who are curious) with friends led me to ponder something – how is it possible that some directors are able to elevate themselves to the level of Hollywood stars? The auteur system can partially be seen to play a part in this – directors like Godard and Truffaut, or new vanguards of the tradition such as David Lynch and Nicolas Winding Refn come to be seen as “personalities”, in part due to the recurring themes of their films, and in part due to the way that they present themselves when selling their own films. You know before you see the latest press junket for his film that Quentin Tarantino will wax lyrical about obscure films he was influenced by, stake a claim on black culture, and address (usually in a provocative way) issues around violence in his films. You know from the subject material of his films that David Lynch will give a philosophical, nonsensical answer if you ask him what the hell Mulholland Drive MEANS. If you’re a white director and you fancy becoming a household name for more than just your oeuvre, this is possible. But can the same be said for black directors?

If I were to argue the case of a black director having star power, my choice would 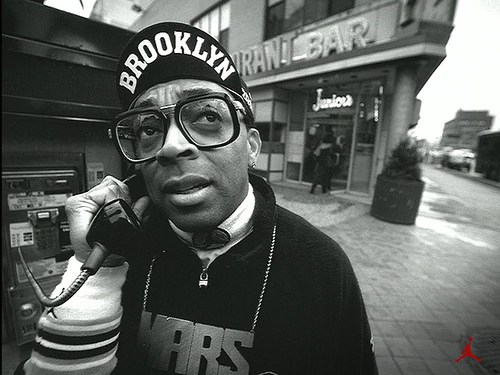 undoubtedly be Spike Lee. Lee’s use of himself as an actor in 10 of the films is certainly one of the things that catapulted him to stardom, both in front of and behind the camera. In his very first feature, the controversial She’s Gotta Have It, Lee plays the poseur Mars Blackmon, one of the boyfriends of protagonist Nola Darling. In an odd twist of fate, Blackmon, an Air Jordans obsessive, became one of the most iconic elements of the film, ending up starring in a series of commercials for the trainers with Michael Jordan himself. Lee even featured on Saturday Night Live in character – all this off the back of a single black and white independent film that unexpectedly became a hit.

While Lee’s films have varied in subject matter over the years, the characters that he plays in them have not. Mookie, the protagonist of Do The Right Thing, shares many similarities with Blackmon – he’s cheeky, opinionated, selfish and street-savvy – yet what sets the two characters apart is that Lee as a director developed a greater sense of pathos between films (Do The Right Thing has often been referred to as being Brechtian in nature), meaning that the film’s narrative sees Mookie facing much more serious decisions. Hell, Lee even manages to conveniently slot himself into history by giving himself the perfect role as the titular character’s best friend in his towering Malcolm X. Described in the book by X as “a dark, stubby conk-headed fellow”, Shorty is the perfect Lee role. The name alone is clearly a sign that he was destined to be played by the film’s director.

Height is, inexplicably, something that plays into Lee’s star image. Back before Kevin Hart was reigning supreme, Lee was out there representing for all the loud, short brothers. Lee sends up his own height in the memorable ballroom scene in Malcolm X – in which he attempts to escape the embraces of a larger black woman, (ah, the misogynoir of Lee’s films, something that could easily dominate another article…) and finds himself placed in a more feminine role when they dance due to their size difference. It’s not just Lee’s height that plays into his star image, it’s his overall appearance – I’m no longer able to think of a time when I’ve not seen the man wearing a hat. From the Air Jordan’s he helped truly franchise via his commercials, to his trademark glasses and hat collection – from a Kangol flat cap to a more traditional baseball cap – you know Spike a mile off. James Dean’s leather jacket is an item synonymous with the deceased star, but for Spike it’s not one item that gives him star status, but his whole LOOK.

Moving away from his role in front of the cameras, it’s Lee’s opinions that have also paved the way on his rise to stardom. From day one Lee has been a man unafraid to speak out, both with his films and his words. His words off-screen have led him to countless feuds, most namely one with Quentin Tarantino that, despite Tarantino actually taking on a cameo loosely based on himself in Lee’s Girl 6, still rages strong. (On the release of Django Unchained, Lee tweeted: “American Slavery Was Not A Sergio Leone Spaghetti Western. It Was A Holocaust. My Ancestors Are Slaves. Stolen From Africa. I Will Honor Them”.) Google “Spike Lee feud” and you’ll see a long, long list of people the director is supposedly beefing with. One has to wonder – how much of Spike’s stardom comes from him being outspoken, and how much comes from him being an outspoken black man? Blackness is a key part of Spike Lee, and he’s sure as hell not going to shut up about it. But while Tarantino can come off as an obnoxious buffoon and also an auteur of the highest standard, I feel Lee is somewhat unjustly painted as just Angry Black Man, period. His films may have dipped somewhat in the past few years, but Lee has remained a constant presence in film and in wider media industries. As my mum pointed out to me recently – it’s very likely that one doesn’t have to ever have seen a Spike Lee film, but can still have a complete knowledge of who Spike Lee is.

If Lee’s stardom is dipping now, and he’s less a respected star and more a joke, is this due to his move back to solely being behind the camera? His last appearance in one of his films was in fact a reprise, in his divisive Red Hook Summer, of Mookie. And while it’s certainly possible for Lee to direct successful films without himself in the frame, such as Inside Man and 25th Hour, it’s certainly interesting that what I’d argue to be his cult films, Malcolm X and to a larger extent Do The Right Thing, feature the man centre stage.

Whilst delivering an honorary Oscar to Lee in November 2015, Wesley Snipes offered his tips for achieving his success – “All you have to do is write some scripts, write some controversial subject matter, say something that’s going to piss a lot of people off, and sooner or later you will be here getting an award”. If that’s the case, then could there ever be another black director with the same star power as Lee? Because whilst working on a smaller scale, one director that’s certainly been embroiled in a feud of the last few years, and has seemingly done his best to piss A LOT of people off, is Steve McQueen. McQueen is a director that’s remained firmly behind the camera in his feature directing career, but has found himself in the spotlight not just for his comments (most famously, the short and sweet “I don’t make films for white people.”) surrounding 12 Years a Slave, but beef with the film’s scriptwriter John Ridley over creative input into the film’s script. McQueen may have been meme-worthy in the weeks following 12YAS’s Oscar wins, but has the smoke has cleared, he has largely vanished, focusing less on star image and more on new projects. Were he attempting to follow Lee’s trajectory, one would presume he’d be following up the controversy with a commercial for New Balance. Alas, a girl can dream.

Maybe the sad fact of the matter is that when it comes to black directors, there can only be one star. (Although I still hold out hope for Ava Duvernay, as not many black women, let alone black female directors can say they’ve had a Barbie made of them) If this is the case, I’d say we’ve got a pretty good one. Are Spike’s views, or even his films, perfect? I for one would argue that they’re not. But then in a way, isn’t this all the better? Do we want one clean, perfect star of a director, or do we want someone that crams many of the messy, loudmouth interesting elements of all of our favourite white auteurs into one tiny package? If Spike Lee’s all we’ve got as a black star director, we’d better make the most of him. But then again, I have a feeling he’s not planning on going anywhere.

Grace Barber-Plentie is a writer and one-third of Reel Good Film Club, a film club focused on highlighting the contributions of people of colour through inclusive and non-profit screenings and events. Her passions when it comes to both writing and programming include depictions of women of colour, issues of “high” and “low” culture, and the importance of music videos as a pop culture medium.