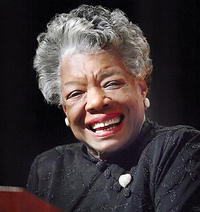 Upon news of Maya Angelou’s death my first thought was ‘there are not enough words to do justice to her achievements, her legacy and her influence upon both the literary scene and humanity as a whole.’
The mounting accolades clearly indicate that her ability to express through prose and poetry emotions, reality and a personal and collective history touched many people.
Much of the content in the work of this ‘Phenomenal woman’ came from her bitter real life experiences. She grew up during segregation, aged 7 she was raped and at 17 years old she became a single mother.

To survive Ms Angelou did a variety of jobs, she was a waitress, a brothel madam, and she worked in a garage pulling paint off cars with her nails. Later in life she became a dancer and actress, toured Europe with an opera company in the 1950s and in 1960 became editor of the Arab Observer in Cairo. During these years she had also become a part of the Civil Rights Movement in America. Finally following a stint as administrator at the University of Ghana, she moved back to America and began working with Malcolm X until he was murdered. She then got involved in Dr Martin Luther King Jr’s campaign and was left devastated when he was assasinated . Despite her grief she was encouraged by novelist James Baldwin to not give up and at that point Maya Angelou picked up her greatest weapon; the pen.

Through her writing and depicting life experiences which perhaps would have broken some, she spoke out, she immortalized a history not to be forgotten and she made sure that both the world and every woman and girl of colour knew that they and their voices were worthy and never to be silenced. Her history, her story, her past laid out in pages which continue to echo loudly today, they reject shame, reject discrimination and serve as a form of warfare.
She was fearless, perhaps the greatest attribute in a writer. To write without fear, without censorship, without want for fame, to stand for what is right, to inspire, to awaken and to own the right to tell your own story, not allowing anyone else to define you are the hallmark of the literary giants among us of which Maya Angelou is one.

Her death reminds me of a question I often ask myself and others; whether you are a writer, a journalist or a reader, why do you write? Why do you read? 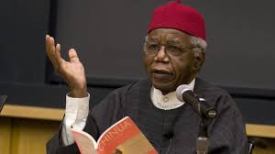 last year, also in his eighties. Both these individuals had an influence on me and their commonalities are reminders of the power of the writer, the ability of this art to transcend borders and fight the status quo. Though born on different continents, with different life experiences they spoke one language; that of courage and literature.

Achebe did not refine his craft and walk the path of a writer simply for personal glory or to sell books, his purpose was far bigger. In an interview with the Paris Review he was quoted as saying “I don’t lay down the law for anybody else but I think writers are not only writers, they are also citizens. My position is that serious and good art has always existed to help, to serve, humanity.” Twice he turned down the Nigerian National Honour citing his dissatisfaction with the state of affairs in the country, illustrating that accolades held little significance.

For some Achebe’s greatness lay in the wit, humour and depiction of the complexities of the human race featured in his fictional work, for others his blistering and unapologetic views which feature in his essays on subjects including colonialism, corruption and oppression have proven to be the catalyst to inspire others who like the man himself, consider themselves to be ‘A protest writer, with restraint.’

We live in a world which often feels like it is dictated by stereotypes; we open the papers and find the media, particularly Western Media continues to define people and places. One has to ask ‘Who creates us?’ If we look at the African continent we see a rhetoric continuously reinforced of war, famine and corruption, while for example in the UK our school history textbooks suggest that many of us did not exist before colonialism. From standards of beauty to global development, it is as if our aspirations, self worth and history run the risk of being dictated by outsiders.
Countering this was part of Achebe’s unspoken war on a global society which till this day is dominated by the words, experiences and voices of a select few. He was determined to challenge the status quo which was formed of foreigners writing “Africa” from the walls of their subjectivity; to play his part in a movement which would challenge the stereotypes and racism found in the representation of the ‘colonised.’  Perhaps one of his most famous quotes on this matter is “I would be quite satisfied if my novels did no more than teach my readers that their past – with all its imperfections – was not one long night of savagery from which the first Europeans acting on God’s behalf delivered them.”

At school he studied Joseph Conrad’s Novel ‘Heart of Darkness’ in which the protagonist journey’s down the Congo river; on this Achebe reflects “I did not see myself as an African in those books, I took sides with the white men against the savages. The white man was good and reasonable, the savages sinister and stupid.” However, in time he awoke to the realisation that; “These writers had pulled a fast one! I was not on Marlowe’s boat steaming up the Congo in ‘Heart of Darkness’, I was one of those unattractive beings jumping up and down on the riverbank.”

In arguably his most famous works ‘Things Fall Apart’ we witness a person and a people living within their own systems and ideals only for the colonial powers to come along and “put a knife on the things that held us together and we have fallen apart.” This was not just a story, this was a reality and there is a particular subtlety in this piece of work which is relevant to communities and Governments even today. He did not glorify pre-colonial times and although there is much responsibility placed upon the colonialists or “the outsiders” he does not shy away from acknowledging the weaknesses within the tribe which has made them so susceptible to disintegration. Through books like this Achebe offered his fellow countrymen and others an alternative history, the ability to see themselves in books and aspiring writers like Chimamanda Adichie Ngozi a role model.

Achebe saw writing it as a moral obligation, an act of political warfare, in fact he recognised the role of ‘the writer’ as being essential, one which was aimed at ensuring that one story did not become the only story, a lesson which must not be lost on the writers, storytellers and journalists of today. His main message can be interpreted as a call to everyone to pick up the pen, to, through art and literature, express their truth, immortalise their history, speak out against injustice and provide some form of service to the world through this act, a path that Maya Angelou also walked. For she chose to write about a a time in history that perhaps many would prefer erased, she used words to ensure that no one could define or forget her experience as a black woman.

entertainers. In his novel Anthills of the Savannah; Achebe wrote “Storytellers are a threat. They threaten all champions of control, they frighten usurpers of the right-to-freedom of the human spirit — in state, in church or mosque, in party congress, in the university or wherever.” foretelling the story of both these influential writers.

There are many lessons to be learned for the writers and journalists of today from Achebe and Angelou none more so than the awareness of the power of the pen to challenge injustices and preserve our histories, the importance of a multitude of voices and the question we must all ask ourselves; ‘Who tells your story?’

As a writer of colour I give thanks to the likes of these two legends for paving the way for the rest of us to follow, to tell our stories without fear or apprehension and to have the courage to define ourselves.
Grateful to be reminded through the legacies of these two greats that this art is not just words on paper, in the words of Chinua Achebe ‘it is a weapon’ and to succeed at it as Maya Angelou said “the most important thing beyond discipline and creativity is daring to dare.”

4 thoughts on “Maya Angelou and Chinua Achebe: Warfare Through Writing”