I usually begin my letters with the typical pleasantries but my patience with you has indeed worn thin and I’d rather just get right down to business.  I have questions that require answers and I hope you are prepared to answer them.

Frankly, your fight against racism is nothing but lip service and contradiction and while you’ve set out tougher sanctions to combat racism this year, last season’s incidents involvingJohn Terry and Luis Suarez should have seen more action rom FIFA.  As usual, you were nowhere to be found; not even for a single solitary comment.  The rather damning evidence brought to light by the independent commission would lead anyone to believe that both Chelsea and Liverpool spent more time trying to excuse if not defend Mr Terry’s and/or Mr Suarez’s reprehensible actions/remarks rather than holding him to account.  Surely, as a governing body to The FA and football confederations like UEFA, that was an opportunity to pressure them into investigating the club’s actions and you said and did nothing.

Why haven’t you asked questions of Chelsea Football Club or Liverpool Football Club in the wake of this rather serious incident?  But why stop at club level?  In the same way you’ve done nothing but issue pathetic fines against national FA’s like Serbia for abusing England’s black players, you’ve also done nothing about England’s own fans chanting about building a bonfire and burning both Ferdinand brothers in reaction to Anton Ferdinand’s reporting a certain Chelsea player and captain even after the organisation FARE reported the incident to you directly.

How can you possibly believe that you’re taking a stance against discrimination by remaining silent about racism when bigger clubs with a higher bankroll and reputation are involved but then throw the book at other clubs who also engage in acts of discrimination across Europe?  Your paltry fines against these select football associations and their offenders are an appalling response. It appears UEFA has followed your example where the paltry fines are concerned, seeing as they’ve fined a single player in Nicklas Bendtner more than you have any other national side or club side for racist chanting and banners.’  Your president Sepp Blatter had previously gone on record to say that there is no racism in football and while the John Terry/Anton Ferdinand and Luis Suarez/Patrice Evra incidents go someway in proving him flat-out wrong, these are only the tip of the iceberg.  This point is furthered by the recent incidents in Italy (where racist chanting from fans are quite commonplace) where AC Milan sustained racist chanting twice in the same season: once against Pro Patria, the other against Roma.  Inter Milan were fined on two separate occasions – one during a Europa League Round of 16 match against Tottenham, the other against AC Milan directed solely at former player Mario Balotelli).  That figure rises to three if you include the shenanigans that implicated Benfica as well as Inter. 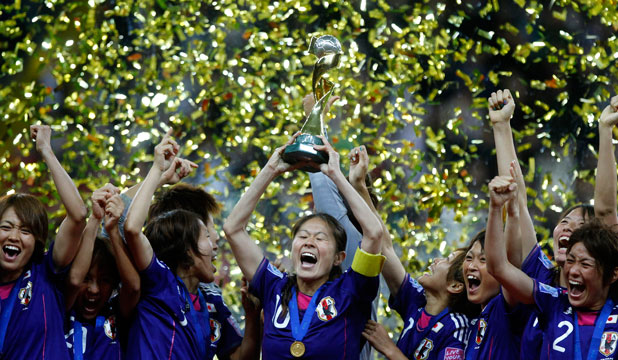 Another thing that bothers me: why is your commercial support for the women’s game so low compared to the men’s?  You have a rather lucrative deal with Electronic Arts (EA SPORTS) where the FIFA franchise is concerned.  I’ve long supported the games but it bothers me entirely that you haven’t at least requested that there even be an option to create female players, let alone include the likenesses of the most recognizable and beloved female footballers, past and present (e.g. Kelly Smith, Marta, Rachel Yankey, Abby Wambach, Hope Solo, Michelle Akers, Sissi, Sun Wen, Birgit Prinz et al).  EA SPORTS to their credit have included female players in their NHL and Tiger Woods PGA Tour games and the games continue to sell well so don’t try the whole ‘It’s not commercially viable’ excuse.  Why haven’t you addressed the issue in male footballers’ wages being astronomically high and female footballers’ wages being laughably low? Why are you able to secure so many sponsorship deals for the male side of club football but you seem inept in your abilities to convince sponsors to support the women who are just as passionate about the game as the men are?  It’s not just the Women’s World Cup that continues to set records year upon year.  In a media advisory statement released by UEFA following Women’s Euro 2013, it seems records were smashed yet again for both live attendance and television ratings.  Therefore, why are the women playing so drastically underpaid compared to male footballers?

Speaking of sponsors: why did you pressure Brazil’s government to change their policies where alcohol in the stadiums is concerned? Brazil had already met the requirements to host the World Cup in 2014 and if the rules against alcohol in the stadiums was such an issue, then why did you award Brazil the right to host the tournament in the first place?  Do you intend to pressure Qatari government ministers to relax their laws against homosexuality and protect homosexual supporters of the game?  What do you intend to do about Qatar’s laws against public drunkenness?  Russian football has a long and sordid history with racism and now it seems there’s a brutal socio-political war against homosexuals as well.  Once again, here is another country that you have awarded the right to host a major international event and said country is already proving too inhospitable to all patrons.  The IOC is doing next to nothing to stop Russian lawmakers from prosecuting gay athletes for simply being themselves at the Winter Olympics.  What will you do to stop Russia from further besmirching the reputation of the game you are obligated to protect?

I believe that you have – as an organisation – acted hypocritically and selectively with only your financial interests and that of your partners at heart.  You say one thing but your actions dictate another.  I believe firmly that your president in Sepp Blatter is not fit for purpose and should reconsider his original intentions not to resign.  I believe that you are running a business rather than supporting the game that countless billions of us love so much.  I hope you intend on doing something about this and I hope you intend on answering every question I’ve asked.  As a lover, supporter, and player of the game, you have lost my vote of confidence because you seem to be a bigger supporter of sponsorship deals than you are in your “zero-tolerance” policies against discrimination and racism.  You don’t seem to love the women’s game as much as the men’s.  You seem to be quite keen on bullying and lobbying against governments but when governments call your methods and actions into account, you seem highly resistant and defensive.

I suppose my ultimate question is: what do you intend to do restore my faith in you?  Up to now, you’ve done absolutely everything to give me the impression that money and the pursuit of profit takes precedence over what makes football an incredible sport: the atmosphere, the exchange of various cultures, and the diversity of all involved from player to patron.  I think you have it all to do to turn this all around.  I await your reply with bated breath.

Joseph Guthrie is a UK-based IT professional, musician, and writer.  Originally from south London, most of his education was set in central Florida (United States). He’s now back in the UK. When he’s not working for a major public internet service provider, he’s the frontman for the band Colourblynd. He also contributes to music blog Sampleface. Away from music, he is an avid writer. Primarily contributing to his own blog, he writes opinion pieces typically about gaming, sports, and politics. @theauracl3

One thought on “Dear FIFA”