This Week in Islamophobia

TW; this piece will discuss the media reporting of the North Yorkshire child abuse story, with a comparison of the well publicised Oxford grooming case.

Google “North Yorkshire Child Abuse” and the entry of relevance appears 5th in the results.

Google “Oxford Grooming” and the predictive searches practically finds story after story for you.

Both are stories of child abuse, both involving groups of men and indeed one story is just a week old whilst the other took place a few months back. Despite this, why is one story well known, first on the search results, whilst the other is consigned to the back pages of history?

It’s sad that when stories like these come out the first concern people have is over the make-up of the assaulter. What colour skin does he have, what religion is he, what country is he from and basically is he non-white. That’s where the story lies. A front page splash of brown men accused/sentenced for child abuse is much more exciting for the media. Groups like the EDL, despite its own clear issues of child abuse and sexual assaults, feed off such stories and spread their own unique brand of hatred, organising rallies and protests outside courts where men of colour face trial/sentencing.
The problem isn’t the identity of the perpetrators but the disparity of media reporting when the perpetrator is white. Operation Yewtree dominated the media for months at end but the attraction there was well known white celebrities being arrested. Once more the victims and their rights were shunted to the side in chase of a “good” story.

Being a minority in the UK means you’re part of the agenda and the media landscape as easy targets. When stories are scarce a scare story involving migrants, religion or race offers print and visual media an easy out.

If you look at the BBC stories for both the North Yorkshire and the Oxford grooming cases you’ll notice some obvious differences. 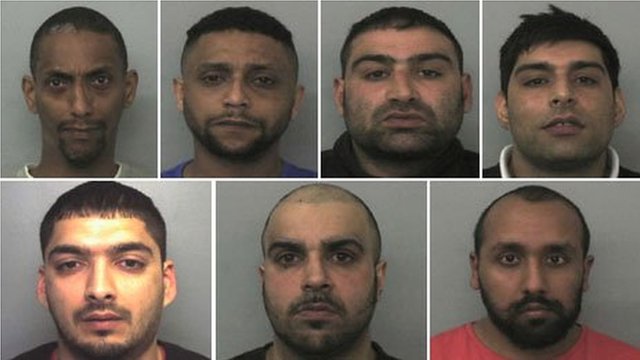 The Oxford grooming case made national newspapers, front pages no less, with mug shots of brown men splashed across all forms of media. The backgrounds of the abusers are given, with particular reference to “east African and Pakistani origin”. There is mention of a BBC debate involving “Local Pakistanis to discuss the relevance of the ethnicity of the men involved”. The word “rape” is used 18 times in the article. Finally, the name and addresses of all those sentenced is provided.

Compare this to the North Yorkshire abuse story, also reported in the BBC, but to less fanfare. It took 3 days before the sharp eyes over at twitter even realised what had happened. Missing are mug shots and discussion of ethnicity. There is mention of “all walks of life” but this could apply to social circumstances rather than background. Indeed all reference to the assaulters is left vague at best. There is no mention of a community meeting to discuss the relevance of these attacks with race. And the word rape is used the grand total of 0 times despite the same article mentioning “sex” and “sexual assault” a number of times.

Finally the name and addresses of those sentenced is provided and at a glance they all seem very white. Of course a name isn’t a marker of ethnicity but whilst the Oxford story accompanied names with pictures, the Yorkshire story left pictures out of the paper.

This level of selective reporting bullshit means victims are again pushed to the side to score political points. By focusing on the ethnicity of attackers rather than their sense of entitlement which allows them to behave in such a deplorable way the media shapes public opinion that non-white = dangerous.

The truth is that man = dangerous. Both stories involved groups of men exploiting children. The truth is that alone and yet by focusing on ethnicity, race, religion and other social factors like class and background more and more victims are used as pawns to fuel political agendas against minorities.

Both groups of men deserve severe punishment and all victims involved deserve the very best support. How is that possible when one article calls rape, rape, and another calls rape, sex?

White men may look different to brown men but we all live in the same fucked up system where men exploit children in all walks of life. Maybe that should be the focus of reporting next time.

Yasin Bangee is a writer based in the North West. He writes about his main passions, football, social justice and inequality, and offers thoughts on all things political. As a a British Muslim he has first hand experience of the rise and impact of Islamophobia. Archive of his column ‘This Week in Islamophobia‘ Find his writing at False7andahalf