Afroella is a Glyph Award nominated comic book series from writer Gemma Bedeau and artist Lee Fenton-Wilkinson who together form the dynamic duo Kromatron Comics. Afroella is inspired by a love of 1960s sci-fi, rocket ships, robots and giant monsters then sprinkled with an appreciation for Blaxploitation and cheeky pop culture references.

the strong colours and strikingly clear artwork in a realistic but cartoon style are captivating, but it is the added cleverness of the characters and the rollicking science fiction story that makes it a real winner” Forbidden Planet international

When the comic was first launched, we had such a positive response within small press comic publications as well as African American and minority focused comics and sci-fi publications.
It’s been a real struggle to get the wider press to cover the launch of our comic or review it from the first issue until now. I believe that a comic even with a Glyph Award nomination from a relatively unknown writer with a minority female character has been pigeonholed by some into being the preserve of women and minorities, although I think our readership would strongly disagree. 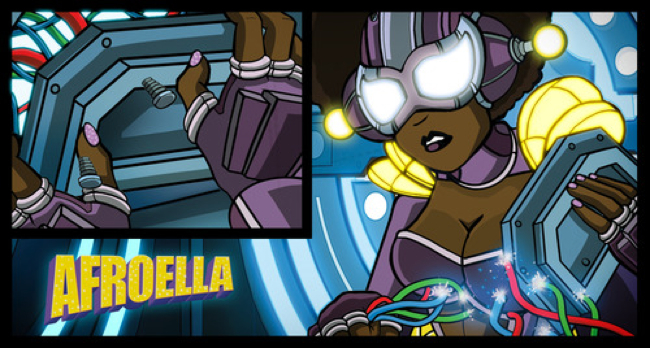 There is a glass ceiling within the comics industry, it isn’t an easy one to break for anyone,  that being said the writers for larger publications are still predominately male and not reflective of the huge minority readership within comics. I think the industry is changing all be it slowly with funding platforms like Kickstarter and digital comics marketplaces like Comixology helping all indie creators like myself reach a wider fan-base and make the larger publications aware of the quality of our content.

As familiar as Archie might be to readers, that’s how novel Afroella is”   Comics Buyers Guide Xtra

I wrote Afroella because I love space opera and more importantly I love comics and have done forever. I’d always wanted to create a comic, I just needed a good story. Afroella  was the first that Lee Fenton-Wilkinson the Artist and co-creator and I felt was worth publishing. With Afroella I wanted to create a character we could be proud of, content that would be engaging, humourus and in a style that is reminiscent of 1960’s Batman and Barbarella and the old Blaxploitaion films that I enjoyed growing up. All centred on a strong female character who had an edge.
The humour in the comic is a result of Lee and I wanting to read something that would make us laugh and cheer us up and stand out in a marketplace where many comics published can be quite serious or demanding to read.
Gemma Bedeau is the writer and co-creator of the Glyph Award nominated comic series Afroella a blaxploitation sci-fi comedy. She is the co-founder of Kromatron a company specialising in Costume and set design and illustration for television, commercials and online digital content. Gemma also scripts short films and is currently working on scripting an animated series for children. @GemmaBedeau 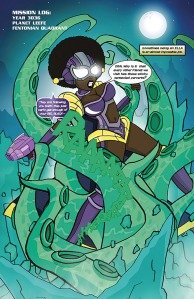 2 thoughts on “Introducing AFROELLA: A Blaxploitation Comic with a little added ‘Fro”