In our family album, the summer of ’64 stands out. My parents are simply attractive beyond belief in those pictures. Dad always in a suit, Mom in a knee-length dress that hugs her body.
They were in Copenhagen that summer. Dad organized an art exhibition at “Den Frie”: “10 American Negro Artists living and working in Europe.”

Except for the grand old man Beauford Delaney, most of the participants were in their thirties. One can see them and him as the last representatives of a tradition of African American writers, artists, and musicians who left the new world for the old.
Most of what the ten black Americans show in the exhibition could be termed Abstract Expressionism. It looks like most American art did after the war but before pop art. In many respects their relationship to Europe was reminiscent of the position of white Americans. Europe is the source of education and culture. America is a penal colony covered in bubble gum. On their reading lists were Yeats, Blake, Dante, Joyce, Frazer. It is a white male literary canon heavy on Thoreau, the occult, Zen Buddhism, and other cornerstones of the burgeoning 50s counterculture.

There were of course other reasons to leave America. If you have seen a single jazz documentary you “know” that jazz musicians could be appreciated for their art only in Europe. It is as though you had to be a very sophisticated Aryan in order to really get black culture. It is an idea that white Europeans and black Americans like to reiterate, but which may not withstand a closer examination. The gay writer James Baldwin had reasons other than just white racism to trade Harlem for Paris.
Dad joined these Americans in exile in the fall of ’63. Behind him he left two children from two separate marriages. With him he had an ample checkbook, two suitcases full of bespoke suits, and a writing career that was still waiting to take off.
Among his remaining papers I find a print-out of a roundtable discussion from the ‘64 exhibition. At the cassette recorder was the journalist Leonard Malone who himself had arrived in Denmark a few years earlier. It is not clear where the article was to be published. Maybe in one of the Danish papers that Malone wrote for, maybe in the U.S

Americans, both white and black, have many notions about Afro-Americans who live in Europe. To many, he is a coward who fled his “responsibilities” of racial struggle at “home” in a desperate search for “paradise” but found instead that
there are “no green pastures…”
Why is he resented so?

During that introduction Malone has a discussion with the artists from the exhibition and with Dad. A more appropriate summary might have been:

How can we escape the curse of race? Can we as artists in some way avoid having
to relate to being black and just make art? Can we, in our capacity as just artists, escape being black? Or are we forced to be black in our art? In short:
Is there any way for us to escape being Negroes and instead become men?

They talk about “the black man,” “the white man,” and “the artist.” Maybe the impression is heightened by the fact that the English of the text does not distinguish between a man and a human, but the subject of masculinity is also explicitly discussed. It is not something that needs to be carefully revealed.

Question: What is your opinion of the current social revolution in America?

Potter: It’s such a nasty question that it’s one of the reasons that I’m in Europe.
I don’t see any direct answer to the American Negro’s problem. I don’t want to cut
the ground from beneath those people struggling because I do feel that struggle is necessary, but I still don’t expect some tremendous fruits dropping down from this… you can’t have a true revolution in America because your white brother is not ready to revolt. They still believe in a whole lot of myths that have been set up… they still believe in the country. And until we get out of these boundaries that we’ve been placed in, and I don’t know how we can, we can’t have a true revolution.

Miller: We can begin by educating or transforming the southern white.

Hardy: How do you suggest we “transform” him – by leaving him to die?

Miller: Maybe we should become very ingenious. We should assist him
in helping him achieve his manhood sufficiently enough so that he can
allow us to pursue ours.

Even these men, who consider themselves liberated from bourgeois conventions and the white aspirations of the black middle class, still share a fundamental belief with the civil rights movement and the black nationalists who have yet to find their voice: that racial equality only can be accomplished through the reinstititution of black masculinity. It is telling that the exhibition’s only female artist, Norma Morgan, did not participate in the discussion.
Dad stands out in the quotes by always being half incomprehensible. He wants to keep the question of racism at a comfortable distance, speak of it in an abstracted way, as if he would be sullied by talking about it in a personal and straightforward fashion. He could say things like “race is the ultimate stigma,” but could never say that he had personally felt wronged. He could never be vulnerable.
In our family’s private historiography these years constitute a triumphant apex, a time when Dad really had it going on. A year earlier a few of his poems had been published in Langston Hughes’ anthology “New Negro Poetry: USA,” the same anthology where Audre Lorde and Leroi Jones for the first time encountered a large audience.
Oh, to be like him, an up-and-coming guy, who chose his own path, who invented himself, completely going against the black middle class’s pathetic mimicry of upstanding whiteness, away from the Beats’ juvenile romanticism and exotification of blackness. To have left Newark’s narrow streets so far behind that it is as though they never had anything to do with him. He is the epitome of cool.

It was always there in the bookcase. Red cloth binding, the title imprinted in gold, “The Flagellants,” Carlene Hatcher Polite. I read 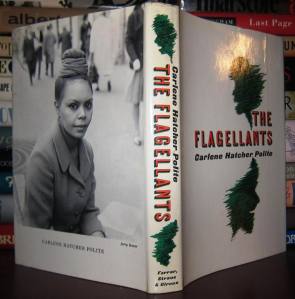 it in high school and didn’t understand a word. For one, my English was too poor (the dictionary informed me that a flagellant is a medieval self-torturer), but above all I didn’t have enough distance to Dad to be able to recognize him in the book. When I re-read it today it is as though he steps out from the pages.
To read a roman à clef is always an extended investigation into who A is and did B really say that and how well does C fit with the D of reality? When the book is about someone close to you it is impossible to read in any other way. At least that is how it was for me. Carlene is named Ideal and Dad is named Jimson, as in jimson weed, a hallucinogenic weed that produces an unpleasant high.
It revolves around their destructive relationship, around his black self-hatred. The book has been described as an early example in a tradition of black female literature about women who suffer in destructive relationships with black men, men who turn their black self-hatred against those who are the closest to them. One thing that strikes me now when I take it out is that I cannot find a single underline or note in the margins. Nothing indicates that he has even read it other than a business card inserted as a bookmark. “CWZ Grafiska AB, Allen Polite, Box 2088, S-122 02 Enskede, Sweden.” Did he re-read it on the subway back and forth to this office job in Kista? Did it lie in his briefcase between his two plastic-wrapped cheese sandwiches? Or did it lie on the nightstand to be read in the early morning hours, before the newspaper arrived? “To the unborn beast” states the printed dedication. There is no personal inscription from Carlene. “The unborn beast,” is that to him or is it to me? Is it a reference to his obsession with the occult or a greeting to a future human being, who gets to escape from that hell of racial self-hatred where Ideal and Jimson make a mess of themselves and of each other?

I have not had the guts to get in touch with Carlene (don’t really know what I’m afraid of) but a while back I spoke for the first time with my sister Lila, the daughter of Carlene and my father.
We discussed what we both see as his low self-esteem and his destructive compensatory strategies. I say that I never understood where they came from. Lila tells me that, as she understood it, they had to do with our grandmother’s deep complex about being dark-skinned, more so than what was “normal” for a black person of her generation, a complex which she transferred to Dad. When she says this a lot of things fall into place. The only thing that surprises me is that it has never occurred to me, that it could be the explanation, that it could be so simple. A part of me is a little bit disappointed that he is so ordinary.

Dad and his generational peers had come here as the last representatives in a long tradition of black intellectuals and artists who left the U.S. for Europe, but once they arrived here the circumstances in the U.S. changed drastically. The civil rights movement was replaced by more radical movements.

Oivvio Polite is a 42 year old writer and programmer born in Stockholm. A collection of his writings was published in 2007 under the title: “White like me”. website: oivviosarkiv  Twitter: @Oivvio