Mr Miliband, MP, leader of the Labour Party, made a commitment to help working adults cope with rising living costs by zoning-in on low paid workers in his speech. He even promised that his first national goal as Prime Minister would be to halve the number of people in low pay by 2025 and raise the minimum wage by £1.50 an hour to over £8.00 by 2020. Whether the Labour party keeps its promises remains to be seen.

Research published last year by the Joseph Rowntree Foundation (JRF) found that low-paid workers across the board hit a brick wall when it comes to work-place training, educational opportunities, promotion and pay rises. But even more concerning are BAME (Black, Asian and Minority Ethnic) low-paid workers who are much more likely to find themselves trapped in poverty with no way out compared to low-paid workers generally.

According to its groundbreaking report looking at in-work poverty within BAME communities, there is an alarming number of BAME low-paid workers struggling to buy food or even pay essential bills. Many have to supplement their income from a full time job with overtime or part-time work for another organisation and in some cases work six or seven days a week just to make ends meet.

Gina Netto, one of the principal research investigators for the report, told me: “BAME low-paid workers were more likely to report that they were being unfairly treated and under-valued by their employers than other workers. Employers need to be aware of the potential for workplace cultures to undermine the implementation of equal opportunities policies making it more difficult for BAME workers to progress to better paid work.” 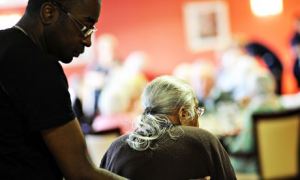 In-work poverty is defined as those experienced by working families whose employment does not lift them out of poverty. According to the latest annual survey of poverty trends, published last year by the JRF, there were 6.7 million people in 2011/12 who can be classified as in-work poverty and 5 million people in 2012 who were paid below the minimum wage. With today’s rising food costs combined with energy price rises and council tax increases, low paid workers in the UK face greater challenges now than they have for decades.

Sawsan Lucina, 34, is a French national with a North African background. She has been working in catering in London for just over four years on a zero-hour contract which means she only works when there are shifts available. Sawsan earns £7.00 an hour but is not guaranteed work every day.

“It’s very difficult to live on my wages – you have to make sacrifices all the time. I don’t travel by tube to work because that is a luxury, I either get the bus or cycle because it is cheaper.

I can’t really save any money because my monthly pay is not very much after I have paid my rent and I can’t go out socialising very often because it is too expensive. I am always very conscious of how much things cost like food and clothes.”

65 low paid workers from all ethnicities were interviewed for the JRF report on In-Work Poverty, Ethnicity and Workplace Cultures’ – 30 in Scotland and 35 in England. Forty-eight of the interviewees were from BAME communities and 17 were White British or Irish. The overwhelming majority of interviewees (59 out of 65) were at the lowest position in the organisational hierarchy.

The BAME group of interviewees included low-paid workers born or brought up in the UK (British Bangladeshi, British Muslim, British Asian and Black British) as well as European and non-European migrant workers. The European group was dominated by Eastern European workers.

Most of the people interviewed for the report were employed in administrative roles, followed by cleaning positions and catering. All the interviewees were paid at or below the minimum wage

According to the report, BAME low paid workers most likely to experience financial hardship include those who are the sole earners in a household with two or more young children or recent arrivals to the UK.

Sawsan, added: “My life is hard but I am lucky that I don’t have any children or dependants. I have to work as many hours as I can to make ends meet which can mean working from 7am until 10pm with a half hour break and I will do this twice a week if I get the shifts. I can’t refuse to work because then I will not be offered any work.

“I would like to earn more money and get promoted but I have been working in the same sector for four years now and I haven’t seen many opportunities for advancement. I can’t study because then I would be offered less work. I feel like I work very hard for the money I earn but it’s not enough to live a good life.”

All low-paid workers interviewed for the JRF report viewed gaining academic or vocational qualifications as a major route out of poverty. But for BAME low-paid workers the challenge of gaining these qualifications was even more pronounced in some cases because of weak English language skills, high levels of poverty which made it difficult to take time off from work to study, lack of knowledge of career pathways and barriers to obtaining financial support.

To combat the many problems BAME low-paid workers face will be an uphill struggle, especially in today’s recession-weary work climate. Support and backing from employers and line-managers will be crucial.

The ‘In-Work Poverty, Ethnicity and Workplace Cultures’ report makes many recommendations for employers to help lift low-paid BAME workers out of poverty, you can download it here

Gina Netto, added: “It is unacceptable that people in work should have to remain in poverty due to a lack of willingness among employers to consider routes to career development and to remove barriers to progression to better paid work. If you have people from different backgrounds at different levels of the workforce it helps to reflect the population as a whole and sends out positive signals to minority groups. Staff who think they are not valued are less likely to be motivated and productive.”

Colin Joseph is an experienced journalist and communications professional based in London. He has worked as a print journalist for national, regional and local newspapers and has worked as a senior broadcast journalist at the BBC where he specialised in Community Affairs focusing on BAME communities. Also skilled in public relations, he has worked for many charitable and public sector organisations focusing primarily on media PR campaigns.