You may not be familiar with the term “respectability politics”, but you’ve heard them before.  Maybe you’ve even engaged in them.  Whether it’s Don Lemon’s ranting, actor Romany Malco’s open letter to Trayvon Martin sympathizers following the George Zimmerman trial, Bill Cosby’s 2004 “Pound Cake speech” or even The Talk co-host Sheryl Underwood’s remarks about nappy hair, respectability politics remain an enormous part of our conversations about Black American culture.

So what exactly are respectability politics?  In short, they are an undefined yet understood set of ideas about how Black people should live positively and how we should define Black American culture. Ironically, they’re usually a huge hindrance to both. And we have yet to stop unarmed Black people being killed by law enforcement or vigilantes every 28 hours. 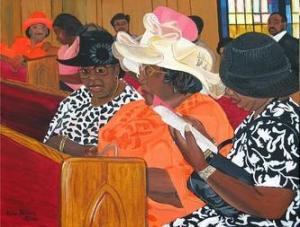 This whole idea of respectability politics began to solidify at the end of the 19th century, when a bold group of Black women from the Baptist Convention – a well-intentioned, important, pro-Black, yet chauvinist, and patriarchal organization – broke off to form their own group: the Women’s Convention.  On the positive side, an essential part of their focus was to uplift the Black community, while perpetuating a sense of solidarity and philanthropy.  Unfortunately, in practice it involved a lot of patronizing behaviors towards “lower-class” Black people.  For instance, one of their major campaigns was to go into impoverished Black communities and hand out pamphlets that “taught” these po’ folks how to “behave” in public places, the value of chastity, and even how to properly bathe themselves.  Side note: if you’ve read that and don’t have a problem with those three things as important values, that’s understandable. Now, imagine someone comes to your front door regularly to remind you to do them…

These respectability politics gained popularity and nationwide solidified into a regular part of Black life. For example, the Chicago Defender, one of the country’s most important Black media outlets, published the following list weekly as a reminder to its newly arrived Southern readers who came to Chicago during the Great Migration:

Don’t the above admonishments sound familiar? And note how every statement begins in the negative.  That’s because the primary premise in which respectability politics are grounded is that Black American culture – and Black Americans themselves – are broken and need to be fixed.  And “fixing” means improving the “Black underclass” that holds us back.  It reminds me of the movie A Soldier’s Story, and in particular, the character Sgt. Waters.  The scene below epitomizes what respectability politics cause the Black bourgeoisie to do to the Black “underclass”.

Waters has made it his personal mission to rid the army – and maybe the world (?) – of ignorant negritude, starting with CJ.  Apparently he thinks the work he’s doing will leave us with Negrus superioris, purifying the race and eliminating all traces of inferior Black folks.  Sergeant Waters, and those who think like him, are actually suffering, though.  This later clip reveals that anguish and the secondary premise of respectability politics:

Wanna hear it again?  Go to 1:04 on the video.  The secondary, sinister premise of respectability politics is the belief that teaching Black people to meet White cultural standards is the way to improve Black culture.  From talking “proper”, to hair straightening, to skin bleaching, to more coded ideas like “acting White”, respectability politics teach us that the White man’s ice really is colder.  In a country that operates on the premise that Black people are inferior, respectability politics cause the sort of sentiment the utterly defeated Waters whimpers at the 1:04 mark.  He’s realized that after years of trying to get White people to see Black people as equals by teaching them “White culture”, he’s actually the broken one who needs to be fixed.

What’s an Alternative, Then?

Maurice “Mo the Educator” Dolberry has taught grades 6 through 20, and has worked at both public and independent schools from Minnesota to Florida to Washington and other places in between. He is currently an adjunct college instructor while working on his PhD in multicultural education at the University of Washington.  Maurice believes that the “geechie” is actually more important to Black American culture than Sgt. Waters. Find more of his writing, public and hip hop scholarship at A Line in the Sand and on Twitter: @MDEduc8r

One thought on “What are Respectability Politics, and Why do We Subscribe to Them?”