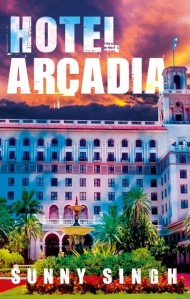 ‘Her photographs are tombstones for those unnumbered, nameless dead. But she files away the negatives and memory cards and crams the commendations, critiques, prizes in an ancient, creaking Ikea cabinet in the far corner of her studio.’

So begins Sunny Singh’s literary thriller Hotel Arcadia, immediately grasping the attention of the reader as we are drawn into the psyche of war photographer Sam.

The central setting of the novel is a hotel under attack by terrorists. While security forces act and the world looks on, we are drawn into the stories of two people trapped inside the hotel; Sam, who is staying as a guest, and Manager Abhi.

The lives of these two characters come together despite the fact that they remain in two separate parts of the hotel. Sam, whose every action seems to stem from fearlessness, ventures out of the room, adamant in her mission to capture images of the terror attack so far. Abhi, having failed to convince Sam to stay inside, assists her via telephone and follows her every move on the CCTV Camera inside the office in which he is stuck. As they travel this peculiar journey together a bond is formed. Two strangers bound by the proximity of destruction bare their souls to each other. What results is dialogue filled with wit, pain and vulnerability.

The presence of death in the air leads both Sam and Abhi to reflect upon their lives as they await their fate. Memories of childhood, lost lovers, decisions made, battles won and lost are unearthed, providing insight into both protagonists. Simultaneously, an edge-of-your-seat narrative continues as danger envelopes the hotel. Abhi waits to find out the fate of his lover Dieter, who was last seen in the hotel bar, while Sam discovers an injured child and must decide whether to tend to or abandon.

The characters are well rounded and nuanced, while every feeling is captured and described so evocatively that there are moments where I as a reader felt moved to tears.  The description of Sam’s history and romantic liaisons awaken emotions. She, hardened by life, ‘a fortress’, never quite able or willing to hold on to love.

This hotel could be in any city, in any country, as neither the characters nor the plotline are defined or limited by the location in which the book is set. On a side note, while names and subtle hints provide enough information about the background of the protagonists, their ethnicity is not central to the story, a refreshing departure from the many books which can ‘typecast’ characters of colour.

It is glaringly evident that Hotel Arcadia is an exceptionally well-researched book, as seen from details about the routine and experiences of a war photographer down to the selection of camera equipment used by those in the profession – every aspect is covered.

From the human emotions to the blood, gore and terror, each element is almost palpable as the reader follows the story charting events from 67 hours ago to the present moment.

The hallmark of good thriller is its ability to keep the reader continuously engaged and Hotel Arcadia certainly does that.  Yet there is more to it and here is where Singh triumphs: though by all appearances Hotel Arcadia is a literary thriller, read it and you find a very human story. An insight into the lexicon of human emotions borne as a result of fear and tragedy, this is a story of how we humans seek some form of redemption in each other.

An absolute must read.