On April 24, 2015 Armenians worldwide commemorated the centenary of the Armenian Genocide. In 1915, Ottoman authorities arrested approximately 250 prominent Armenian community figures and intellectuals in Constantinople, the majority of whom were executed. The great poet Daniel Varoujan was disembowelled before his eyes were gouged out. The carnage spread like a malignancy across the land; cultural leaders were rounded up and murdered, silencing voices of resistance and leaving communities vulnerable to attack. Tens of thousands of able-bodied Armenian men serving in the Ottoman Army were forced to disarm, transferred to labour battalions and then butchered by bayonet or gunshot while performing work duties. Wholesale deportation of all Armenians from Eastern Anatolia to concentration camps in the scorching Syrian Desert was ordered. Deportation was code for massacre. Men, women and children were slaughtered. The barbaric methodology varied. Those who survived the death marches were left to starve in the camps. One and a half million lives were lost.

Fuelled by a pan-Turkic ideology, the chauvinist nationalist wing of the Young Turk Movement, under the banner of the Committee of Union and Progress, planned and conducted the Armenian Genocide. The First World War created ideal conditions for systematic annihilation to take place, allowing the Armenian minority to be cast as a threat to national security. Mustafa Kemal Ataturk’s modern Turkish republic, soaring from the ashes of the Ottoman Empire, was built on the myth of resistance against the imperial powers. The truth was that his immediate predecessors had expunged minority peoples from their homeland, creating the monolithic state Ataturk desired. Kemalists initiated the vehement denial of the genocide, refusing to acknowledge that large Armenian communities ever existed in Turkey. Propaganda depicted the Armenian minority as a rebellious, violent insurgency and attributed deaths to internal conflict. This has been the Turkish governmental line of argument from Ataturk to Erdogan.

Coupled with the ideological reasons behind the Turkish state’s perpetual denial of the Armenian genocide are the practical reasons. Recognition of the genocide would strengthen the argument for reparations to be paid to the families of Armenians who had property expropriated and redistributed by the Ottoman government. If Turkey were deemed to bear legal responsibility for the meticulously calculated theft that took place, the financial implications would be monumental.

The politics in this context have a deeply personal foundation for all Armenians. This is not just about history. This is about our lives, our identities, and our very existence. I have previously written of how our battle for recognition and against denial continues. I have addressed the wounds inflicted upon our collective consciousness from a safe distance, occupying myself with the big picture. However, when I consider the details of my own family’s survival of the genocide, the unrelenting weight of history becomes too much to bear. It is when I pause and reflect on their suffering that I feel the blade of the Ottoman gendarme’s bayonet wedged between my own shoulder blades.

My father, Armenag, first son of Vahe and Rebecca Kazandjian, was born in Cairo in 1951. He carries the middle name of Abraham, in honour of his maternal grandfather, Abraham Tudjarian. The holy city of Urfa was the birthplace of the prophet Abraham/Ibrahim. In the 5th century, Mesrop Mashtots created the Armenian alphabet there, signalling the dawn of Armenian literature and ensuring the survival of our ancestors as a distinct people. On the eve of the genocide, Urfa was home to the Tudjarian family and 45,000 other Armenians. In the scorching summer of 1915, Ottoman soldiers arrived at the Tudjarians’ property. Abraham was 6 years old and the youngest of 4 brothers. His parents were taken away. He would never again play backgammon with his mother. He would never again feel his father’s kiss on his forehead. The soldiers returned. Abraham’s brothers suggested that as he was so small and slight, he hide in the barn. The older boys insisted that no matter what he heard or saw, Abraham must remain hidden amongst the straw. Cowering in his hiding place, Abraham looked on as his brothers’ young lives ended beneath the shade of olive trees.

Abraham conquered the terror that gripped him, emerging from the barn a day or two after his brothers were murdered. He stumbled through the broken, bloody ruins of his community. On the brink of exhaustion, Abraham was offered shelter and warmth by a Turkish family who were repulsed by the Ottoman government’s brutal campaign. From there he was sent to one of many orphanages for Armenian children in Greece. One imagines this decision was made with his safety in mind, given the fervour and fanaticism with which the genocide was undertaken. In total, orphanages in Greece became sanctuaries for around 15,000 Armenian children. It was in this safe space that Abraham would meet Ovssana, a fellow orphan from Urfa. We know nothing of the trauma she endured, of the horrors her childish eyes witnessed. Armenian women often carried the burden of their suffering in silence. Patriarchy created the space for misplaced shame, meaning the sexual abuse that took place during the genocide was seldom discussed openly. United in grief, the two would eventually fall in love, only to be separated when Ovssana joined relatives in Cairo who had escaped the killing.

At the age of 18, Abraham embarked on the pursuit of happiness and followed his soulmate to Egypt, only to discover that she had been coerced into marrying an older man. Armenian culture was, and still is, steeped in patriarchal attitudes, and this hideous practice was not uncommon. The star-crossed pair would not be denied, lobbying Ovssana’s family until the forced union was annulled. My great-grandparents, orphaned by the genocide, were finally joined in marriage. Together they had 8 children, one of whom was my grandmother, Rebecca. Perhaps it was written by the gods that my great grandfather was never supposed to live a long life; he contracted gastro-enteritis and died at the age of 42. Abraham’s body succumbed to illness during the months preceding my father’s birth. Armenag would never be held by the man to whom he ultimately owes his existence.

The story of my family’s survival is not unique. The Armenian diaspora in its near entirety is directly descended from genocide survivors. Families are bound as one by separate tragedies that form the arching narrative of our suffering, rubbishing the denialist arguments proposed by successive Turkish governments.

I have been researching my family’s experiences with my cousin, Michelle Magarian. Her great-grandparents on her mother’s side of the family, Flora and Minas Kuyumijian, lived in the town of Albãstan. They had three children together; two boys and an infant girl. The Kuyumijians were forced from their home and ordered in to separate deportation marches towards the concentration camps surrounding Deirez-Zor, in the Syrian Desert. Deportation marches became death marches. Ottoman gendarmes escorting caravans of Armenians were ferocious in their violence, bayoneting and shooting whomever they pleased. The gendarmes also allowed members of the Special Organisation, a special forces unit under the War Department, to massacre and rape deportees. 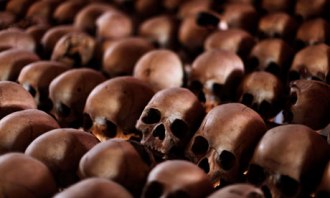 Minas was able to escape; hiding amongst the corpses that littered the Anatolian countryside, he survived the passage to Syria alone. Flora was made to undress by her tormentors. It is likely that she was raped, though she would not talk about that aspect of her ordeal. Then, on the lush banks of the Euphrates, Flora’s hands and feet were bound with rope. She watched as the gendarmes drowned her children. Begging to die, she too was hurled into the water. However, Flora’s instinctive desire to preserve her own life was strong and she was able to cling to the vegetation that fringed the river. A Turkish peasant rescued her, offered her clothes and then concealed her amongst the produce in the back of his cart. He personally facilitated Flora’s transit to Syria. Fate then intervened; Flora and Minas were miraculously reunited in Deirez-Zor. They survived together, finally emigrating to Brazil. In Sao Paulo they had five children and lived long lives.

It is a sad fact that the Armenian genocide and the ongoing battle against the forces of denial have been decisive in shaping my identity. I can only look to the past with profound grief. The extreme violence my family endured is the foundation of our narrative. What existed before 1915 was stolen from us. If I were to return to my ancestral homeland, it would be near impossible to trace our roots; our history has been erased. I am frozen in time. I cannot move forward until our suffering is recognised. The denialist arguments proposed by successive Turkish governments are a continuation of the crime itself. Governmental denial reshapes history and demonises the victims, successfully replicating the anti-Armenian sentiment that was rife when the genocide occurred. It is a fallacy to believe that the Armenian Genocide has two legitimate histories, one for the perpetrators and one for the victims. The genocide is not an allegation, it is a fact.

Malcolm X said, ‘If you stick a knife in my back nine inches and pull it out six inches, that’s not progress … The progress comes from healing the wound that the blow made. They haven’t even begun to pull the knife out. They won’t even admit the knife is there.’

There will be no progress without recognition.

The Armenian Genocide: A Complete History by Raymond Kevorkian

The Armenian Genocide: our battle for recognition and against denial continues by Robert Kazandjian

The Burning Tigris: The Armenian Genocide and America’s Response by Peter Balakian

A Shameful Act: The Armenian Genocide and the Question of Turkish Responsibility by Taner Akcam

Armenian Golgotha: A Memoir of the Armenian Genocide, 1915-18 by Grigoris Balakian

Robert Kazandjian is an educator and writer. He works with vulnerable children in North London. His writing seeks to challenge inequality, in all its guises. He has previously written for Ceasefire Magazine on racism in Israel, gender politics and hip hop music, and the necessity of Armenian Genocide recognition. He blogs poetry at makemymark.tumblr.com. He cites Douglas Dunn, Pablo Neruda, James Baldwin and Nas as major influences. He tweets from @RKazandjian

2 thoughts on “No Reconciliation without Recognition: A Personal History of the Armenian Genocide”