We’re going to start with a football analogy (don’t worry, we won’t be here for long). Arsene Wenger and Sir Alex Ferguson – two of the game’s most venerable managers – have long thought that bravery is not revealed in players who throw themselves into hard tackles, but in the creative player who’s on the receiving end, one whose legs are a topography of welps and bruises, yet continue to demand the ball in order to keep creating.

The same way this courage is overlooked in footballers, it’s also an unrecognised quality in how women of colour are forced to mediate with a world constructed to harm them. It’s one of the biggest maculas in our society, yet it elicits little more than a shrug from those it doesn’t directly affect.

While this is partially sustained by White Feminist Inc.[1] habitually demeaning women of colour, my focus is on the many men of colour who weaponise their patriarchy, with the effects often felt disproportionately by black women.

Our world is structured to despotize black bodies, unless it can extract use from them. Often the only use that can be gained is in the form of the athlete or the entertainer, and has a huge bias towards able-bodied, cis, black men.

Far too many don’t actually want to stop the school bully, but want to be one. Through multifarious methods, we try and

hector black women into being “not too…”. Not too sexual. Not too loud. Not too joyful. Not too human.

All one has to do is look at the social media account of any prominent black woman to see the minefield of abuse they experience. It puts one in mind of this scene from The Matrix Reloaded. Mikki Kendall once stated, “Every bigot in town comes to my [Twitter] mentions sooner or later.” And she’s not alone[2].

This online hostility sometimes replicates itself in the outside world in the form of street harassment (as superbly detailed by Pia Glenn), abuse in the workplace, or the plagiarism of one’s work. Instead of acting as a rampart, plenty of black men function as a rapier, singling out black women for habitual aspersions, particularly those who are dark-skinned. Or a preference – as explored on this site by Emma Dabiri – to associate oneself with non-black women[3].

If you as a black man are dating non-black women out of spite toward black women, guess what? Your relationship is a sham.

The endgame is to try and assail all women of colour into silence, because under kyriarchy, the only good WoC is a supplicant. Existing in a noxious Venn diagram of transmisogyny, Islamophobia, and misogynoir, with attendant axes of oppression also factoring on occasion.

Searching to explain this learned harmful behaviour, Dr Ornette Clennon warned of “falling under the spell of black priapism and aspiring to this limited commercial branding of masculinity that pivots on homophobia, misogyny, and emotional infantilism.”

To return to my football allegory about players being kicked, how many of us, if not doing the figurative kicking, have still watched it happen, and not said or done a thing? How many of us have been complicit in attempting to squeeze WoC into a narrow alcove of what they should aspire to be, like some heteronormative, patriarchal game of Tetris?

This is exceptionally articulated in Cecile Emeke’s poem, Fake Deep: “Can you work, cook, clean, twerk and raise children independently? Only a state of the art black woman for he. Forget that good old-fashioned humanity.” 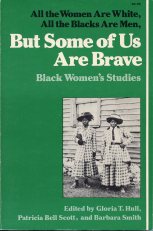 Just because something is seen as normal doesn’t make it acceptable. Their bravery is only necessary because the rest of us have been so cowardly. We also shouldn’t forget that I’m not saying anything that WoC haven’t been saying for generations.

While WoC merit fulsome praise for their courage, that can only be a comma in this conversation, not a full stop. In a recent interview, Ifeyinwa Frederick stated: “The black woman who is able to take hit after hit and keep standing up. Show me that woman, and I’ll show you someone who has probably spent nights crying in silence.”

A few weeks back, Janet Mock – who’s dealt with both transphobia and misogynoir – delivered a sensational monologue (on Nicki Minaj’s waxwork figure at Madame Tussauds), ending it with the following: “It’s due time that we stop gawking, violating, pointing and policing black women’s bodies, and begin protecting, and celebrating, and centreing black women’s lives.”

And not just the funny black women, or the clever ones, or the ones who “do it for the Vine”. It would signal true societal transformation if we stopped trying to tell them who they should be, and instead give them the space to tell us who they are.

It’s a virtue exemplified by women of colour on a daily basis. They shouldn’t be the only ones.

[3] – Ever notice the amount of black footballers whose spouses are white?

Work published on Media Diversified is the intellectual property of its writers. Please do not reproduce, republish or repost any content from this site without express written permission from Media Diversified. For further information, please see our reposting guidelines.

2 thoughts on “Women of Colour: Their Courage. Our Cowardice”