It’s that time of year again…

You’re not to know this about me, but I hate Halloween. I always have done. Even when I participated in “trick or treat” on a couple of occasions when I was a child, I was secretly wishing I was back home controlling the adventures of Super Mario on my old NES.

But my problems with Halloween go beyond any individual dislike of crowds of people and dressing up. While many look forward to this time of year – some of my friends among them – this is often a frustrating and enraging time for people of colour.

If you’ll indulge me this digression; back in the 17th and 18th centuries, London society was dominated by the aristocracy during the summer months. A key element of this era being the parties, often used for the purpose of wealthy families arranging for their progeny to be married. One can often hear the phrase, “It’s the height of the season”, excitably uttered in television and film set during this period.

So, while it would be incorrect to dub October 31st as “racism season” (after all, racism functions on a year round basis), Halloween is often the day of racism’s biggest party.

Every year, we see a panoply of cultural appropriation, often in the form of white people dressing up in blackface, as Native Americans, geishas or “terrorists”[1].

This racism often intersects with sexism[2], with many costumes appearing with the prefix of “sexy”. Not only does this illustrate the narrow societal understanding of what counts as sexy, but also insists that women[3] put themselves on show, whether they want to or not.

One of the most pernicious aspects of various groups being reduced to a singular costume is that it erases the nuance, depth, and plurality of a people. Part of the oxygen that allows white supremacy to breathe is the unspoken belief that white people are capable of anything, but people of colour can only ever be one thing.

Part of why many who participate in this (often overt) racist appropriation think nothing of it, is that the atmosphere around Halloween is one of childlike jollity, a time to put the everyday stresses of life to one side, and revel in the self-indulgent fun of the occasion.

However, all this fun is reserved for the most privileged when oppressed groups are crushed into one-dimensional cartoons. And reducing us to cartoons makes it easier to cause us everyday harm – even after Halloween. It’s why it’s so easy to laugh at the travails of Daffy Duck in Looney Tunes’s “Hunting” trilogy, because we know it’s not real violence.

But we’re not cartoons. These costumes, and their effects, are harmful. Let’s not forget this all exists in addition to the quotidian manifestations of bigotry.

Plenty of wise words have been written to try and ameliorate this damaging behaviour; be it from Everyday Feminism, the Intersectional Feminism Tumblr, Melissa McEwan, Trudy from Gradient Lair, or Blair L. M. Kelley breaking down the racist history of blackface.

And yet, I carry a cloak of weariness just thinking about Halloween, because I know what’s going to happen. Let’s be honest. We all know. In about a week’s time[4], we’re going to see costumed racism vomited onto our computers and smartphones. We might even be forced to see it in person.

It seems the only option is to heed the words of Daniel Jose Older. Halloween may be a time of revelry for some, but for others, it’s just another reminder of our place in society’s pecking order.

To bring this back to my own country, I sometimes hear complaints that people of colour (especially immigrants) don’t make the effort to “integrate” into British society. Well, why would anyone want to integrate into a society that permits this?

26/10/14 UPDATE: It’s both sad and inevitable that a postscript is required for this piece.

One area where I failed with this piece was not mentioning that to remain relevant, oppressive cultural practices have to ensure that they are timely. This is why last Halloween we saw pictures of people mocking the killing of Trayvon Martin and blacking up as the “Crazy Eyes” character from Orange is the New Black[5]. 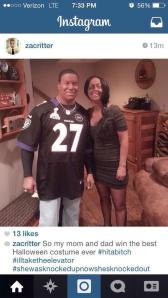 One of the main stories of oppressive and violent behaviour in 2014, was the assault of Janay Rice by her (now husband), former NFL player, Ray Rice.

While the only decent reaction would be to have sympathy for Janay Rice, many have leveraged her pain for Halloween costumes. Notice I say “many”. That link isn’t one aberrant example. It really isn’t[6].

This is the state of play. If you’re on the receiving end of oppression during the other days of the year, kyriarchy reserves a special place for your suffering during October.

Given that Janay Rice was repeatedly erased in the debate around her assault, I feel it’s only fair to let her have the last word; “It’s sad that my suffering amuses others.”

[1] – And of course, this “terrorist” costume always evokes a brown person.

[2] – And last year, ableism showed up to this kyriarchal party.

[6] – Had I the stomach to continue scouring the internet, it’s likely I would have found even more.

Work published on Media Diversified is the intellectual property of its writers. Please do not reproduce, republish or repost any content from this site without express written permission from Media Diversified. For further information, please see our reposting guidelines.

4 thoughts on “FROM THE ARCHIVES: Halloween, Racism’s Biggest Party”