Nelson Mandela once said, “If the United States of America or Britain is having elections, they don’t ask for observers from Africa or from Asia. But when we have elections, they want observers.” What Mandela meant is that there is a perception that countries besides the USA or Britain (and other global north countries) are not capable of carrying out democratic processes. Underlying this perception is a racist assumption that Africans, Asians and other non-white people cannot advance politically without the influence of the global north.

In recent months I have been observing the way in which the Hillary Clinton campaign for the Democratic Party’s nomination for the U.S. presidency has come under scrutiny because she is failing to attract women voters in large numbers. Her failure is in stark contrast to how some global south countries have successfully elected women to numerous political positions, including head of state (more on this later).

Hillary Clinton is the first woman with a strong chance of winning the United States presidential elections. It is a pivotal moment for U.S. politics, for feminists, and for the cause for gender equality in the United States. The big question for women, and progressive men, is whether to vote for Clinton.

Clinton has an enormous mountain to climb as a woman candidate. She faces the challenge of lobbying for votes based on her politics and policies. She also has to persuade voters to see beyond her gender (for those who don’t believe in gender equality or don’t believe that gender inequality is still a problem), or to vote for her because she is a woman (for those who might not agree with her politics but would like to see a woman in office). Despite her qualifications and experience, she has to manoeuvre obstacles that no other candidate (Republican or Democrat) faces in this election.

This issue has come to the foreground with statements made by two influential women; feminist activist Gloria Steinem and former secretary of state Madeleine Albright. While on a T.V. talk show Steinem said, “When you’re young, you’re thinking: ‘Where are the boys? The boys are with Bernie.’” Here Steinem was referring to the popularity of Hillary Clinton’s opponent for the Democratic Party’s nomination, Bernie Sanders. Sanders is popular with young voters, including young women. The irony of Steinem’s statement is that she reflects a bias against young women; a form of ageism. She undermines their intelligence based on their age. She also undermines a central objective of the feminist movement that she comes from. The objective being the collective social recognition that women are equal to men in intelligence.

In a separate incident, at a rally for Clinton, Albright criticised the ways in which women do not support each other professionally, stating, “There’s a special place in hell for women who don’t help each other!” Many women may be able to relate to the experience of not receiving support from other women. However, Albright’s tone and message was chastising, thereby alienating those women who might have otherwise sympathised.

At the heart of both statements is the issue of whether American women should vote for Clinton because she is a woman, regardless of whether they agree with her political ideology and policies, or vote for a man whose policies and rhetoric appeals to them more. For example, how do voters reconcile Clinton’s support for the Iraq war, and the civilian deaths of women there (including the loss of peace and security for those still living)? How do women voters justify supporting Clinton after the subsequent rise of the Islamic State of Iraq and the Levant (ISIL) with its human rights abuses, particularly the widespread sexual slavery of women in its territory?

Indeed, the fundamental question for feminists and activists should be what kinds of women leaders to support. There is no point in electing a woman to any political position if she would not serve the interests of women and other marginalised groups, not forgetting her official job requirements. Steinem and Albright know this. That is why they have not criticised women voters for not voting for women Republican candidates, such as Sarah Palin and Carly Fiorina, because of their positions on women’s issues such as abortion rights. Arguably, Steinem and Albright should have used a less antagonist and accusatory tone against women who do not support Clinton. They also have to be clear that their support for Clinton is not just because she is a woman and they wish to see history made in their lifetime, but because they believe that her election would mean some kind of progress for gender equality.

What is also missing from the current conversation about the nomination of Hillary Clinton is that in general, the U.S. record for women’s political leadership is disappointing. Not only as head of state, but as representatives in various legislatures. The United States is only 75th in an Inter-Parliamentary Union ranking of women’s national legislative representation across the world.

It is perhaps a shock for some to learn that many developing countries are leaders in terms of women’s political representation at the national level. Countries such as Rwanda, Bolivia, Cuba, Senegal, South Africa, Nicaragua and Ethiopia are in the top 20. Equally surprising might be that African states are well represented in this list. Not only are women well represented in national structures of decision-making, but there have also been women heads of state in Liberia, Malawi and the Central African Republic. In a significant number of other countries, including Uganda, Algeria, The Seychelles, Rwanda, Mozambique and South Africa, women have been represented in national legislatures in high numbers. Rwanda, in particular, has the highest legislative representation of women in the world. Its parliament has more women than men representatives.

We tend to associate progress towards gender equality and women’s political representation with liberal, high-income Scandinavian countries such as Sweden and Denmark (who are also in the top 20). Why then are low and medium income countries also electing numbers of women to senior leadership positions? 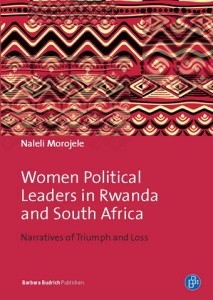 In my book, Women Political Leaders in Rwanda and South Africa: Narratives of Triumph and Loss, I discuss the specific political instruments and processes that have been used to increase women’s representation, these include quotas, different types of electoral systems, and political will. But an equally important tool used is language. Women (and some men) in Rwanda and South Africa use terms such as “human rights” and “democracy” in their language when lobbying for women’s political inclusion. In an interview I had with a Rwandan woman member of parliament, she explained the motivation behind women’s inclusion:

And our President has said it so many times…this is what he says and this is what I believe; one; it is their right, it’s their right. Two; women are more than 50% of this country, if we really want to develop we cannot leave half of the population aside, and I know the leadership of this country is for development. It is for people’s well-being and you cannot do it if you leave the other half away; at least this is what we believe.

Another Rwandan woman, a former ambassador, had a strong opinion about the poor representation levels of women in some developed countries such as the United States. She told me:

Both of these women’s statements suggest that women’s political inclusion is the result of a political and social commitment to social progress and development, more so than electing women for the sake of it. However, even these statements must be viewed in the context of controversies surrounding Rwanda’s current human rights’ records. In one case, a woman opposition leader, Hutu Victoire Ingabire, has been convicted of genocide denial (amongst other charges) for her call to punish those who committed crimes against the Hutu during the 1994 genocide. So far, only those involved in genocide crimes against the Tutsi population have been prosecuted. In effect, her statement indicts the mostly Tutsi ruling party, the Rwandan Patriotic Front (RPF), for not taking responsibility for crimes against Hutu victims during the war.

What Rwanda’s leadership does better than Clinton’s campaign is to use a strong rhetoric to garner support for women’s leadership. To court women voters it is not enough for Clinton and her supporters to only emphasise the sentimental historical significance of her election to the presidency. It is not enough to pressure women to vote along gendered lines. There has to be an appeal to Americans’ pride in their democracy and their desire for general social progress and equity. Clinton has to emphasise that her election would mean real social and democratic progress and is not just a symbolic event. For women specifically, she has to make the case that her election would advance women beyond the hot-topic, high profile issues of reproductive rights and the gender pay gap. Despite its human rights abuses and political controversies, Rwanda’s leadership utilises its undisputed success in growing the economy and advancing gender equality to substantiate its commitment to collective social progress.

In Rwanda and South Africa women’s leadership has brought rapid and tangible gains in numerous women’s rights in those countries, which I also discuss in Women Political Leaders in Rwanda and South Africa: Narratives of Triumph and Loss. Whether Clinton’s individual election does the same for American women remains to be seen. Which brings us back to my earlier point; the type of woman elected matters. Clinton has to convince women that they will be better off, as women and as citizens, as a result of her election.

The irony here is that the U.S. often pushes its own agenda and views of democratic progress onto African states. In this case, perhaps the U.S. can learn something from an African way of doing politics.

Naleli Morojele is a South African writer and feminist. She is currently doing her PhD in Political Science. She holds an MA in Africa Studies from The University of the Free State and a BA in Women’s Studies & International Economics from Wheaton College, MA. Her areas of interest include the intersections of gender, class, and race with politics and development. Her previous research looked at women’s rights and roles in post-conflict transformation in Africa, particularly in Rwanda and South Africa. In her current research she is looking at contemporary socio-political constructions of gender ideology in post-Apartheid South African politics. Tweets @NaleliMorojele