On 29th March 2016, Douglas Murray wrote an article entitled “The questions nobody wants to ask about Asad Shah’s murder”. In this article, he praised the Ahmadiyya community as being a peace-loving and laudable community, perhaps the epitome of what a Muslim community should be like. It is true that the Ahmadiyya community is peace-loving and does some very good charity work. It is also true, of course, that the murder of Asad Shah was brutal and horrible, and that the suspected killer, a fellow Muslim, must be punished. 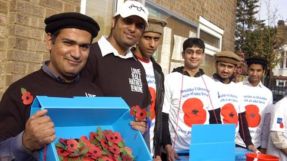 However, the deeper motivations and assumptions of this article must be questioned. Murray’s main argument seems to be that any community that does not question this country in any way, especially its foreign policy, is to be lauded. Murray’s unspoken agenda is that one’s country, in this case Britain, should never be questioned, never challenged. In his article he indicates that this is why he respects the Ahmadi Muslim community over any other community, and this is why high-profile figures visit the Ahmadi annual jalsa (gathering) every year. Critics of Ahmadiyya accuse it of collusion with the state; this unproven accusation even goes back to the founding of the community in the nineteenth century in India, when it was allegedly able to establish itself by cooperating with the British authorities. The main point of this article, however, is the critical importance of holding the state to account.

I think it is imperative to constantly question the state, and as a non-active Ahmadi myself, I can certainly say that for the Ahmadiyya community this is not a priority. Why so?

The Ahmadiyya community is relatively tiny. For this reason, it is almost impossible to find suitable marriage partners. This means that many people end up in miserable marriages, having married the  wrong person, or remain unmarried. Girls reach the age of 30, 35, 40, hoping and hoping, but eventually accepting they will not find a partner.

If someone wants to marry outside of the community, the outsider is expected to convert. If not, and the marriage goes ahead, the Ahmadi member is usually ostracised by the family and by the community. There is no violence, no “honour killings”, no formal proclamation – just quiet ostracism. This is a terrible fate to inflict on someone for simply wanting to fulfil the most basic human needs for marriage, children, and family.

It’s worse for girls, as always. (Cc the patriarchy) Boys can have their fun, with a blind eye being turned, until they are ready to settle down. Any girl wishing to do the same would meet a different fate. Girls are not allowed to date or have any kind of a Western social life; they must wait until they are married, no matter how long that takes. Boys also have the option to go “back home” to find a suitable partner. Of course, girls can do the same, but it is usually much harder for Pakistani boys to come and settle here, both financially and socially speaking.

The Ahmadiyya community is perhaps no worse, in this regard, than many other communities that frown upon members marrying outside of the tribe, whether they be Jewish, Hindu, Sikh, or Catholic. Many of its members are some of the nicest people one could hope to meet and many of them are highly educated and successful; they include a Nobel Prize winner and a Foreign Minister of Pakistan (now both deceased). But on the other hand, some adherents are as mean and petty and dogmatic as members of some other communities that Murray might not be such a fan of. Furthermore, selectively and hypocritically picking out certain communities as paragons of virtue possibly adds to the danger of fomenting the sort of inter-community violence that has already occurred in the tragic case of Asad Shah. 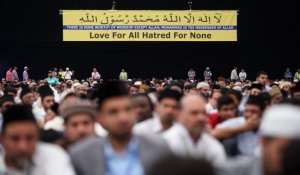 As a neocon (and very much so, as demonstrated by his book Neoconservatism: Why We Need It), Murray would no doubt support liberal values such as free speech and freedom for women. Free speech against the leadership is not allowed in the Ahmadiyya community, and its women have few freedoms. And Murray, as an atheist and a gay man, would certainly not be welcome in the community; he would not be attacked, he might even be given tea and biscuits, but he would certainly not be accepted. In fact, he would learn that the Ahmadi slogan that he quotes so admiringly, “love for all, hatred for none”, sounds good in the abstract but does not extend to those who do not fit in or who question the community in any way.

Murray is right about one thing. He is right to bemoan the lack of knowledge of religion in this country, which extends to the foolishness of a prime minister who insists on drumming on about Britain being a Christian nation, thus alienating all non-Christians; and about Christian values, when those values patently do not belong only to Christianity and which this government certainly does not practice. Sadly, Murray has betrayed his own ignorance of certain religious communities whom he has held up as an example for us all – remaining silent, selling poppies, ostensibly tolerant – but which are far from internally tolerant and supportive as communities should be.

There are those who may use this article as further ammunition for Islamophobia or anti-Ahmadi sentiment, to prove that Islam is against free speech and against women. I would remind them that I am writing this article as a cultural Ahmadi Muslim, and that it is Murray’s hypocrisy and self-contradiction that is one of the two main thrusts of this article. Murray even implies in Neoconservatism: Why We Need It that the government is entitled to lie to the people under certain circumstances. Not only do I fundamentally disagree with that, I personally am vehemently against any form of discrimination, whether based on gender, race, religion, belief, or any form of orientation. As for Ahmadiyya, like any community, it is not perfect, but its non-violent stance is certainly to be praised. However, as well as criticising others, we are all entitled – indeed have a duty – to also constructively criticise our own communities and countries, as we strive together for a more just and fair society for all. Indeed, true progress only comes when there is criticism from within.

Dr Rohail Ahmad has a PhD (2013) and an MA (Distinction, 2010) in Creative Writing from Brunel University. He is a college lecturer in English, and is also a visiting lecturer in “Writing Global Fiction” at Brunel University. His MA novella, The Dancing Girl of Lahore, jointly won the Curtis Brown Prize at Brunel, and was also longlisted for the Paris Literary Prize. One of his MA stories was shortlisted for an anthology of British Asian fiction (Too Asian, Not Asian Enough) by Tindal Street Press. His PhD novel, Pure Mafia, is the only contemporary novel about child labour. His third novel, The Jihadi Couple, is a leading-edge work about ISIS. Find his books on Amazon Twitter @HaveYou_Read_It

If you enjoyed reading this article, help us continue to provide more! Media Diversified is 100% reader-funded – you can subscribe for as little as £5 per month here.

9 thoughts on “What makes a ‘good’ Muslim community?”