Three separate works are featured in Bangarra Dance Theatre’s new show, OUR: Land People Stories, each with a distinct flavour but unified by discipline, culture and history. Independently striking in style, they tell different stories of the Indigenous experience through the medium of dance at its most progressive and adventurous.

The first piece in the programme is Jasmin Sheppard’s Macq, an analysis of the 1816 massacre of the D’harawal people at Appin, 75km south of Sydney, and Governor Lachlan Macquarie’s complicity in the incident. It is an expression of British imperialism, specific to the carnage of two hundred years ago, but also serves as a representation of the ongoing invasion of Aboriginal land and peoples that our society struggles to rectify. Imagery of death, sorrowfully depicted, provides the piece with an intense poignancy.

I spoke, keyboard to keyboard, with Jasmin Sheppard, choreographer of Macq…

Hi Jasmin, I saw your wonderful new work Macq at the opening night of Bangarra’s OUR at the Opera House last week, and was immediately impressed by the intense emotion that you were able to put on that stage. As a choreographer, how do you marry emotion with dance?

I interweave emotion through my choreography by always returning to what I want to say. Why am I creating this movement? Would that character respond physically in that way considering their experience? Being true to your story brings honest emotion out.

Were you conscious of what you wanted the audience to think and feel? Did you create the work to generate a specific reaction?

I wasn’t conscious entirely of how I wanted the audience to react, but I was conscious of telling this account of history with honesty and respect towards the D’harawal people who experienced this side of Governor Macquarie’s leadership. I was compelled to bring their story to light. 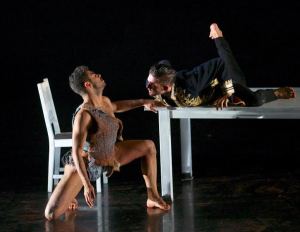 The Lachlan Macquarie you present in Macq is in some ways a sensitive guy. Was it important that you showed us someone who was more than a simple villain?

The more I researched Lachlan Macquarie, the more complex I found him to be. On the one hand he had many close Aboriginal friends, and on the other hand its clear in his diary entries what he was compelled to do (the massacre). I wanted to bring out those complexities, and perhaps explore the notion that he may have felt incredibly torn. I also wanted to shed light on the fact that he was known to drink around 12 glasses of wine a day, and had syphilis. I don’t think that anything is black and white, so before I painted him as a straight out villain, I wanted to explore the other side of him. I think perhaps things just escalated and ran away from him, and he had to take a harsh stand when maybe he would have wanted things to go a different way.

I love seeing Aboriginal interpretations of colonial stories in our theatre. Will you be exploring more historical subjects in your future work as choreographer?

I love history and I believe that as Australians we are only taught the white version of history, so, yes I’d like to explore more historical accounts in the future.

As a modern Indigenous woman, is it important to make distinctions between your personal perspectives on things, and what your community thinks?

It is important to express to non Indigenous people that, although Indigenous people share an unbreakable bond, that we are all individuals and from many different Indigenous nations. There’s always going to be difference of opinion. Think of Europe if you like!

Do you feel a pressure or responsibility to represent in your art, a view of the world that is shared by your Aboriginal ties?

I don’t feel pressure to represent my art through my Aboriginal connection, because I have a passion to tell the untold stories through dance, and Aboriginal stories often need a voice. However, I do think it becomes problematic when artists who are Indigenous are only given opportunities when they present Indigenous content. Can’t the fact that someone is Indigenous be enough for it to be an Indigenous work? Typecasting is never a positive thing when its due to race.

The blend of dance styles in Macq is so new and inventive, where does that vocabulary of movement come from?

I can’t say where my style of dance has come from. It is definitely influenced by Bangarra and the many teachers I’ve had over the years, but essentially everyone has their own unique style at Bangarra which comes from their very being, and this is my language.

Bangarra is going to New York and Paris in early October. Do you think audiences from different places will respond differently to your work?

It will be a different Bangarra programme, but we always receive great responses from our international audiences. 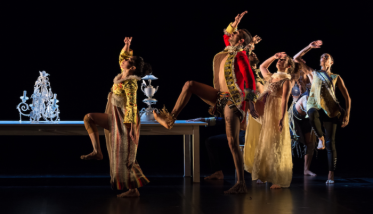 Dance is often an abstract art form. Do people surprise you with what they see in your work? Macq is obviously political. Have you encountered viewers who have taken offence to the messaging of your work?

I love the fact that the message is understood through my work from audience members. I haven’t yet encountered someone who is offended, in fact I’ve been delighted to hear that many people had no idea this massacre had occurred, and are interested to learn more of history that they didn’t know. This was my ultimate intention.

As a contemporary dance piece, Macq is so strikingly advanced in its evolution within that medium. What’s next for Jasmin Sheppard? Is there a plan for how your choreography will further develop? Is there a vision?

I do hope to choreograph more in the future. I would love to be able to explore more of what is possible on the stage in storytelling through dance.

A Hit of Culture with Suzy Wrong is our regular column keeping you up to date and well informed about Australia’s arts, media and culture scene.

Suzy Wrong is an Australian transwoman of colour. She is Sydney’s most prolific theatre reviewer, publishing independently at suzygoessee.com