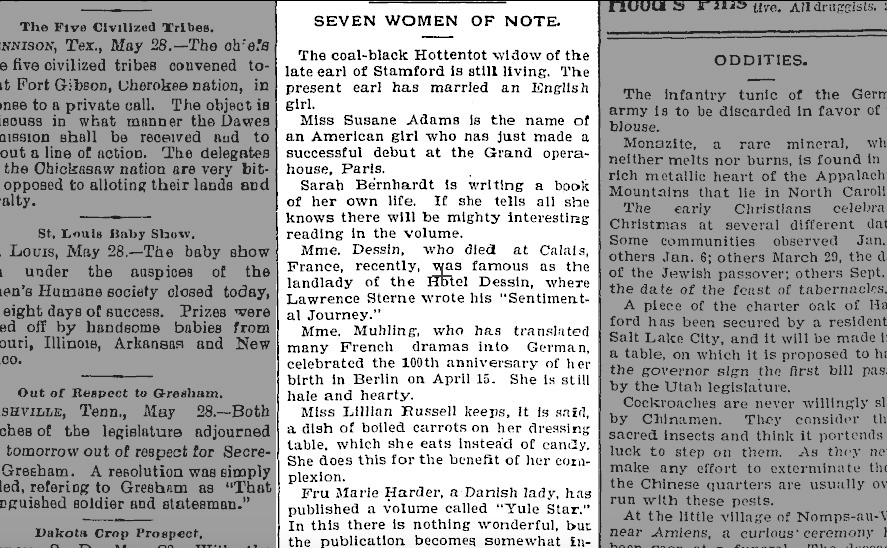 The coal-black Hottentot widow of the late earl of Stamford is still living . The present earl has married an English girl . Miss Susane Adams is the name of an American girl who nas just made a successful debut at the Grand operahouse , Paris . Sarah Bernhardt is writing a book of her own life . If she tells all she knows there will be mighty Interesting reading In the volume . Mme . Dessin , who died at Calais , France , recently , was famous as the landlady of the Hotel Dessin , where Lawrence Sterne wrote his Sentimental Journey . Mme . Muhling , who has translated many French dramas into German , celebrated the 100 th anniversary of her birth in Berlin on April 15 . She is still hale and hearty . Miss Lillian Russell keeps , It Is said , a dish of boiled carrots on her dressing table , which she eats instead of candy . She does this for the benefit of her complexion . Fru Marie Harder , a Danish lady , has published a volume called Yule Star . In this there is nothing wonderful , but the publication becomes somewhat interesting when one hears that it Is her debut , and that Fru Harder is 70 years old .

PROVERBS . Kternlty Is a patient waiter . True love never harmed anybody . Folly never objects to working overtime . Too many people do their coaxing with a club . Love on only one side means misery on both sides . The coming woman talks too much as–she comes . It will be noticed that the ideal husband never marries . Homely women are necessarily the most sensible ones . The devil manages to get a good deal of work out of lazy people , Few men profit by the mistakes of others ; fewer still by their own . The unexpected happens so often tliat some people never expect anything else . If the truth were spoken at all tlrneii friendship would soon become the rarest thing on earth . A man would escape a good many -unpleasant experiences If he had to pay for them in advance . Every woman with a worthless husband thinks she ls fully qualified to pick out a husband for any other woman .

Look ont for the pnpor buznnr to be given by the ladles ot the MMhodist Episcopal ohuroh very BOOH . For watches , jewelry unci fine repairing go to F . , T . Mnnd . 418 Bust Hyinnn .