I was slowly getting worse. The numbness escalated and was starting to resemble paralysis. My most terrifying moment was the minute I looked in the mirror, found that my curls were rebelling even more than the usual, and I was unable to tame them. Brushing my hair was no longer an option. My fingers curled around the brush and it slipped right out of my hand. I stared at it as it landed on the floor. It seemed to mock me. I knelt down and fought with it; until I finally managed to get a grip. I calmed down once I was in control again. The process of brushing my hair was even more of a hassle. I just couldn’t do it. It was best to pretend that it looked fine rather than dwell on my failed attempt… I was simply trapped in someone else’s body. So I didn’t panic. This was not my body. I just had to drive it to the hospital and wait for the doctor to probe at it and tell me what exactly was going on.

The above excerpt is from Notes on the Flesh, a biomythography dealing with the body, love, and loss. Feminist critics such as Helene Cixous, Luce Irigary, and Julia Kristeva have always seen the body as a site for resistance. Writing the body, from the body, and about the body has always fascinated me. This argument is grounded in French feminism, however, the idea of Feminist Disability Studies is still struggling to emerge. Disability Studies as a field emerged in the late 1990s and scholars witnessed the rise of terms like “ableism” “able-bodiedness” “passing” “cripping” and several others. Many Disability Studies scholars laid the groundwork needed for a new discipline to see the light. Eli Clare’s Exile and Pride (2015/1999) and Robert McRuer’s Crip Theory: Cultural Signs of Queerness and Disability (2006) were among some of the first critical texts to discuss the intersections of otherness, queerness, and disability. These authors challenged our everyday assumptions about disability, refusing easy generalisations: because there are so many diverse intersections between disability and otherness, there can be no universal understanding of a disability experience. To disrupt the essentialising of disability, we must “crip” the cultural production of disabilities and identities, meaning we must resist all attempts to make disability ‘normal’. That said, the work produced by disability scholars and writers since the 1990s remains decidedly Eurocentered. Western constructions of disability, western forms of illness narratives, and the intersection of gender and disability have been examined. What remains is little, scholarly or creative work that deals with disability and identity in contexts outside of the West. There has been, however, important work by postcolonial critics such as Julie Livingston who explored ‘debility’ and chronic illness in Botswana, as well as Jasbir Puar’s more recent work on debility, biopolitics and social exclusion.

Although feminists of colour have begun to explore this unchartered territory, I struggled to find fiction that presented non-Western disabled protagonists. To address this lack in the literary canon, I found myself venturing into an area that I don’t usually meddle with: creative writing. And this is how Notes on the Flesh (Alshammari, 2017) began to emerge and grow. The book is a collection of short stories, loosely a biomythography (Audre Lorde’s term). A biomythography tell the individual’s story, weaving together different narratives, fragments of memory, fiction and nonfiction, attempting to give form to both “biography” and “myths.” There is always an overlap between fiction and nonfiction in biomythographies. They forge a new space, a third space that oscillates between that which the writer knows and does not know.

My book deals with the experiences of disability, illness, and love in a Middle Eastern setting. As someone who was struggled with Multiple Sclerosis for more than a decade, l chose to take up the task of writing the illness narrative. This began with my introduction to the works of Nancy Mairs and Audre Lorde. Mairs gave me a beacon of hope. She had written about her transition from English professor to a writer dealing with Multiple Sclerosis. She had George, though, her partner, who remained witness to her journey with Multiple Sclerosis. I was alone. I realised that being alone in the face of a brutal illness is not where I wanted to be. I picked up Audre Lorde’s The Cancer Journals. I read her work and found myself dwelling in her insistence on intersectionality, and on writing the effects of race, gender, sexuality, and disability in one (or even multiple) voices. Writing Notes on the Flesh proved to be a daunting task. I was writing based on my imagination, but also on and through my own bodily experiences. The distinction between fiction and nonfiction, real or imagined, past and present, no longer phased me. What I wanted was a collection of voices that expressed what it was like to be ill, in love, and vulnerable.

I had long given up on science and doctors. Everything for me was abstract, unclear, and irrevocably vague. But his insistence on numbers made me feel less alone. Numbers were no longer the enemy. He loved numbers, and I surrendered. There is something beautiful about having someone witness your life’s journey. A witness to pain, a witness to pleasure. The silence, leaning against the wall, watching, observing, knowing when to speak, when to breathe. There is an uncanny silence that affirms presence, and to be present, to exist, is to be, to heal. 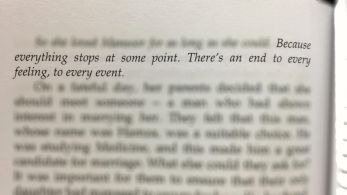 Vulnerability and shame can be inextricably linked especially when our lovers are involved.  To navigate a new relationship and explore this unfolding terrain of self/other is difficult enough for those who are able-bodied. All of us are vulnerable in the face of love. Add disability and/or chronic illness to the mix and we can be grappling with many vulnerable and shame-inducing dynamics. The lived experience of the body is always important. And vulnerability is always involved, because illness interrupts the grand narrative of a healthy and stable self and world-view. The sociologist Arthur W. Frank considers illness a form of disruption of the stories we tell about ourselves, and a state of “perpetual vulnerability to interruption” (p.57). As such illness stories are always partial and are not founded on a state of stability or coherence. I wanted to explore what happens to bodies that are already shamed, what voices are lost, and what sense of agency is there in experiences that are barely tangible or where there aren’t the cultural narratives to give them shape. How do we tell our stories to others and how do others re-tell these stories, both to themselves and others?

Every narrative in Notes on the Flesh is the telling and a re-telling of a story. These stories are often told from the point of view of women, but there are also voices of male narrators. Men and women can be othered and oppressed (although not in the same way) in the face of disability. Women face sexism and ableism, but men can also be reduced to a lacking subject or exoticised through the ‘super-crip’ trope. I wanted these different stories to be placed alongside each other, and alongside mine. The body speaks out in Notes on the Flesh. It is a biomythography in the sense that it explores multiple selves, internal and external conflicts, histories, nations, and biographical stories, fictionalised, serialised. The stories are not still and they are always crossing boundaries, real and imagined, fictional and factual, and between different versions of ourselves and others.

To break away from boundaries, borders of the mind, the taboo of the body, what is it that we need? Is it just desire? And, is desire for the terminally ill romantic? Is desire a part of life, a love for life? What do you do when society claims to know your body better, when it insists on cleansing the spirit, making you better, a purer version of you?

Shahd Alshammari teaches women’s studies and literature in Kuwait. Teaching for her is activism and she covers topics such as the body, madness, intersectional feminism, and others. Her work has appeared in the Journal of Middle East Women’s Studies, Journal of Literary and Cultural Disability Studies, Pomona Valley View. Her books include Literary Madness (2016) and her latest is a collection of short stories ‘Notes on the Flesh’ (2017). She welcomes dialogue and collaboration; follow her on Twitter @Shahdalshammari