With the 70th anniversary of Partition passing this summer, Maryam Jameela talks about the legacy of empire in today’s Britain

My family did not come to Britain, Britain came to us.

2017 sees 70 years since the announcement of the Partition agreement that created India, Pakistan, and after a civil war some years later, Bangladesh. This description is the most common and basic manner in which Partition is understood in Britain. Occasionally, there is some hint of the chaos that ensued; the greatest mass displacement in modern history, religions separated out across states, some general suggestion of suffering and death. As a nation, however, Britain has come nowhere close to grasping the devastation caused in British India, the specific violences enacted across groups of people, and the legacy of British imperial control in South Asia.

I have spent the past month at the 1947 Partition Archive in Berkeley, California where the largest collection of eyewitness accounts from Partition are housed. They work to train story scholars to interview survivors and collect their stories of pre- and post-Partition experiences. I anticipated finding it difficult to sift through some of the interviews, and it has been. It’s been uniquely heartbreaking to watch interviews from people who have seen hell and happened to survive it.

That said, I’ve also been grateful. Grateful that such an archive exists, and that it is run by people committed to preserving and protecting oral histories that have, by and large, been stamped out of relevance in much of the West. It has been a complex and layered experience, with emotions fighting for control, but I cannot help but think that in the context of the finality of Partition and the irreparable damage it did to millions, what is the place of this gratitude? 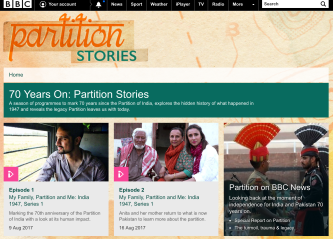 Perhaps the feeling has its roots in the nature of Britain’s relationship with Partition. Come any numerically meaningful milestone in the years since independence, commemorative documentaries and radio shows are churned out with the same kind of language in each instance  – “movement,” “hidden histories,” “forced migration.” These words are not adequate for expressing the anguish and turmoil that millions of people did not survive, but they are the words we have. Having been educated in the British school system, I know from first-hand experience that the only element of Partition that seems to matter in the curriculum is that colonial gift, the railways! This attitude of benevolent colonial masters is one at the centre of explaining how it is possible that we will never know just how many people actually died, how many people were raped, how much people suffered from violence committed by Hindus, Muslims, and Sikhs alike.

I’ve lived in Britain all my life, I am British, but I am not only British. This means I know what it is to live there and understand how people look at you, what people expect of you, and what people want for you and your kin. I know that Britain is not, and will probably never be, capable of grasping its role in the trauma and turmoil of Partition.

This year’s anniversary happened against the backdrop of the last year or so in British politics, which saw the core of this country – a core of unwavering commitment to xenophobia and racism – confirmed during several campaigns that saw references to refugees as cockroaches, Nigel Farage’s Nazi-style poster, and the Leave campaign’s anti-immigrant dog-whistle tactics. Narratives that are imbued with the power of a blinkered view of the past. Narratives that are affronted at the lack of that gratitude.

Partition is a part of the heritage of many of the people of South Asian descent living in the UK, but it’s also a part of the heritage of all Brits. The  Partition History Project is an important step in teaching this history in schools, but critical historical education needs to extend much further. The idea of ‘British values’, touted as freedom, tolerance, and respect rings completely hollow when we aren’t honest about British history in all its brutality.

“One area where there is room to improve is the active promotion of fundamental British values in our schools. Recent attacks in Westminster, London Bridge, Manchester and Finsbury Park have brought into stark relief the threats that we face…just as important as our physical safety is making sure that young people have the knowledge and resilience they need to resist extremism…”

But we all know that this isn’t what she really means. Schools won’t be teaching the history of empire to help protect young people against xenophobia and racist extremism precisely because the perpetually slipping mask of British values is one that regularly showcases anti-immigrant, xenophobic, and racist rhetoric. These values are the ones that have become the bread and butter of social discourse today and manifest a deluded kind of ‘resilience’ where British cultural memory works hard to avoid itself; in order to understand our contemporary political moment we need only look at where Britain has come from.

Maryam Jameela is a PhD candidate at the University of Sheffield. Her work examines British government policy in relation to cultural media representations of South Asian Muslim women in the West. She tweets @yammatron