It is very hard to create satay away from home. When I arrived in Cambridge some six years ago, one smell I missed—and I did not anticipate missing this—was the smell of satay grilling over charcoal. We’re thinking here about smoke: smoke that carried with it wafts of sizzling, burning animal fat, a coy register of lemongrass, sweetness, an intensity that you brought home with you and which persisted in the laundry basket.

You do not make satay at home, even at home. Off to the food centre we bobbed, us children waiting eagerly at the communal tables—and sometimes these were in the open, beneath the night sky—while Dad ordered from the makcik who was already busy fanning satay over the charcoal fire. We loved our satays, but mostly we didn’t care much about how good they tasted, for it was great fun just to dunk them in peanut sauce and dredge as much as you could right into your mouth. The ketupat (rice cake in woven palm leaf) was perennially fun to unwrap. The cucumbers and onions were irrelevant and left to the parents.

Now, last year over Christmas in Belgium, I again missed this. From previous failures in Cambridge, I knew it would be futile to try re-creating it at home in the broiler, oven, pan, what have you. But I persisted, anyway, for the Christmas party with my husband’s family, using whatever ingredients I could get my hands on. One could deem the result a courageous attempt. Does it matter? Home is always away from home and we just need to do something about it. The migrants to Singapore—Javanese, Malaysian and Hainanese, to name a few—knew this and they created new satay from what they had here.

The story is told that my grandfather was so good at choosing fish from the wet market—essentially a covered market with many stalls selling fresh produce from 5 in the morning—that the fishmongers both feared and respected him. When he became older and weaker but still wanted his daily fresh fish for dinner, he brought my mother to the market and gave her some tips. So, my mother became the fish connoisseur, but she is too affable, unlike my stern, unspeaking grandfather, to be feared by the vendors.

I know nothing about choosing fish and everything about eating them. We have had such good fish every night at home, prepared in the simplest of steaming methods, that I have never been able to bring myself to eat steamed fish at restaurants, neither in Singapore nor in my years abroad. Steamed fish belonged to the dining table in our living room.

You had to choose the steaming method according to the kind of fish you got that day. Some fishes had to be steamed Teochew-style, with preserved vegetables, tofu and tomatoes, others had to be topped with chopped garlic, chilli and preserved bean paste à la Nonya style, and yet others needed the Cantonese treatment, with scallions, cilantro, ginger and soy sauce. But there were no hard rules; the ang sai (a kind of red snapper) usually made an entrance Nonya-styled, but the next day, we would see another portion of the fish prepared with some modern tomato sauce (my mother is very inventive).

There is little to be said about learning this entire fishy business. “It’s just instinct; you will know it’s fresh,” my mother says. As with such things, where instinct decidedly has not descended upon me, I figure it’s best to appreciate my mother’s skills and the fish at the dinner table for now.

You can smell sambal lala from quite a distance: an intermingling of the pungent sambal belacan (a chilli shrimp paste) and the salty fishiness of the lala (a kind of thin-shelled clam). It is not a fancy dish—you can easily get it at the neighbourhood hawker centre (a food court with communal sitting and many food stalls to choose from) or the zi char (literally cook and stir-fry) stall, and it’s the norm to eat the clams with your hands, sauce and all.

Because the portions of this dish can be quite huge, it is common to see this as just one of many seafood dishes shared amongst friends or family on a dinner night out. Typically, it will grace the table with other seafood dishes such as chilli crab, cereal prawns, sambal stingray, sambal sotong (squid)… just to name a few. Even the ways in which the lala can be prepared are numerous—the local zi char boss might even accommodate your requests and prepare something off the menu.

Pen cai literally translates to basin vegetables, but what we see above are clearly not just vegetables, and neither are they served in a basin. The traditional dish, which has Cantonese and Hakka origins, has gone through so many modifications and adaptations that no two pen cais today would have even the same method of cooking the same ingredients, less to say the type of ingredients. Suffice it to say that this dish is now typically consumed during the Lunar New Year here, and has come to be associated with prosperity and celebration—hence the inclusion of delicacies such as abalone, scallops and prawns.

What I find endearing about this dish, and many typical braised Chinese casseroles, is the notion of a family gathered at the round table and working through the ingredients in the casserole, layer by layer, with their chopsticks in one hand and rice bowls propped up with the other. These meals last forever. You hold back on the scallops because you know those are Brother’s favourite, and before you know it, a prawn has landed in your bowl from Sister’s chopsticks either because she knows it’s your favourite, or she wants you to peel it for her. It works both ways. Father retreats for a while to take a puff, and rejoins later when it is time for the vegetables.

I guess it takes very little, and very much, to feel like a family.

On one of his visits through the villages of Malaysia, my father chanced upon a small family restaurant that was preparing to roast a pig in their charcoal oven, a cylindrical tandoor-like outdoor oven. He was invited to witness the whole process and join in the eating—24 hours later. It turned out that the pig, which had already been marinated, had to be dried, and then slow-roasted overnight, eventually yielding only 2/3 of its original weight. That pig, my father recounted (and he barely talks), that pig, is one of the best things I have ever tasted.

The suckling pig, which frequently graces the table at wedding banquets in Singapore, is quite a different matter. First, it is a suckling pig, which means it is a young piglet killed between two and six weeks, and second, it is typically roasted in a standard kitchen oven for 3-4 hours. A decadent dish, no doubt, that marks the biggest celebrations. 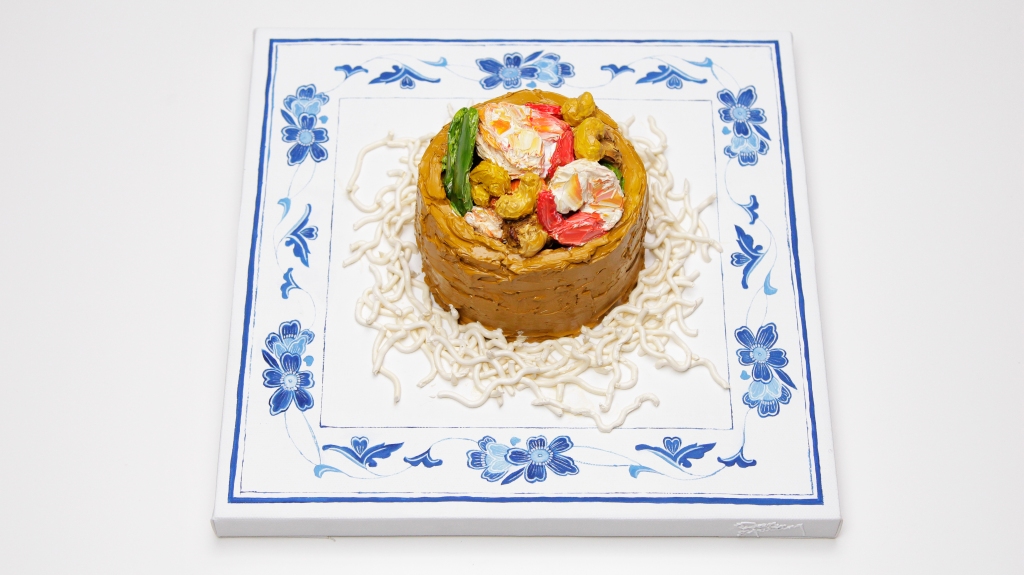 When I first saw Pan’s painting of this dish, what surfaced were hazy, long-forgotten memories of dining at an old Cantonese restaurant in Singapore with my family. As far as I can remember, weekend dinners there were luxurious affairs. We had what seemed to me were exotic, delicious, and—fun dishes. There were those fragrant chicken bites that came nestled in puffed up paper parcels, immense claypots that came with the strangest ingredients such as tofu-skin puffs containing rich broth that you juggled into your bowl with chopsticks hoping not to burst them, and not forgetting this immense, crunchy deep-fried wall that encased bits of seafood or chicken stir-fried with nuts and vegetables. Can you imagine the thrill of being the child who had the privilege of being the first at the table to break the wall? I don’t think we fought for this privilege because we rarely had this dish—it was not that cheap—and so the youngest had her way.

A bit of explanation is in place. The wall is made from steaming yam (a kind of tuber related to the sweet potato), making it into a paste, moulding it into a wall-like structure, and then deep-frying it. It has an enigmatic Mandarin name (佛钵飘香)—one which I can still hear spoken in Cantonese by my mother at the restaurant more than two decades ago—which literally translates to fragrance from the alms bowl. That the yam ring resembles the shape of the alms bowl is obvious, but what its clearly non-Buddhist contents has to do with such a name remains a mystery.

About the artist
Pan Huiting creates sculptural impasto paintings that foreground the materiality of the paint and is based in London and Singapore. Her paintings have been featured in books, magazines and newspaper and she has participated in several exhibitions of her work – both group and solo. She is currently doing her Mres in Fine Art at the Royal College of Art, London.

About the writer
Lin Li is a full-time writer and educator based in Belgium, Cambridge and Singapore. She graduated from Cambridge, Queens’ College with a PhD in English in 2017 and currently writes mixed-media fiction, essays and academic pieces. Her forthcoming book on music, Where to place the grace note? Conversations on piano music with Yu Chun Yee, will be published by World Scientific in 2018.