At the start of Black History Month 2018, Nels Abbey argues that white depictions of Jesus are an import tool for white supremacy
@nelsabbey

It is Sunday morning. You gleefully hop out of bed and into the shower before putting on your best clothes. Perhaps all whilst playing the best of Kirk Franklin. You grab your Bible and head to the house of God to catch-up with Christ (perhaps to get your sins washed away or pray for a world without racism). You arrive at the doors of church full of gusto, happiness and desire for the word. And then – sigh – you see him: White Christ.

If you’re a black person with any history or knowledge at this point your soul sinks a little. For you know what White Christ is all about. You know that he is to the Church what Colonel Sanders is to KFC: the patron. The symbol. The mascot. The focal point of marketing, the attraction that gets the punters through the door and keeps them coming back. But the problem really kicks in when you acknowledge that White Christ is also to the Church what he is to white supremacy (and what Colonel Sanders is to obesity and heart conditions).

Black people and Christianity (as we know it today) have a deeply complicated relationship. Christianity is an Abrahamic religion conceived in the Middle East and

popularised in and by Europe. Black people often became Christians at the end of a whip, on a plantation or in a deep desire to escape destitution. The spread of white supremacy went hand in hand with the spread of Christianity. Often missionaries would show up to Christianise a place only to be followed by violent and deeply racist Europeans who desired to colonise a place. From slavery to colonialism to neo-colonialism: White Christ – as a metaphor and a symbol – was the common overseer of each of the defining atrocities we were subjected to.

Coming to the present day: as white supremacy claws its way back to polite societal acceptance, figures on the far right often argue for Europe and America to return to Christianity or ‘cultural Christianity’. What is hard to ignore is that the people making these arguments are usually ardent atheists. Their argument has nothing to do with faith, love or belief or wanting better for yourself and your fellow human. Instead, White Christ has become a graphic symbol of white supremacy. A symbol of what white supremacists consider to be the ‘natural order of things’.

Black people are the spine of the continued existence of the church. Take black people out of the equation and up and down the country churches would be empty buildings each Sunday morning. A glorious irrelevance. But knowing everything we know about the way the church has treated us and our struggles in the past (and present) why do we continue to engage? Why would any knowledgeable black person be caught dead in church or practising Christianity? Why do we assemble before imagery of White Christ every Sunday morning?

I wrestled with my faith during the height of the Black Lives Matter era. Time and again I saw Christianity exploited ruthlessly to dampen the legitimate anger, concerns and fears of black people. At times people who’s loved ones had just been killed were immediately goaded to forgive the perpetrators (often white police officers). More often than not they would oblige, often citing Christianity. I even coined an insensitive phrase for this concept: ‘I-forgives-them-lawd-ism’. In frustration and alienation, I found myself flirting with atheism and questioning every last thing about my faith – I even argued with cherished friends about it. Was I a fool or still a slave due to my beliefs? Was I wrong to even question this?

I found comfort and reassured faith when I finally realised that there were predominantly two forms of Christianity in our society today. One that overlapped entirely with white supremacy. And another that angrily and passionately rejected white supremacy and all its symbols and practices. One was actual Christianity and the other was just white supremacy in Christian garb. I knew which I belonged to. I knew which had shaped my beliefs, my values and my actions. Indeed, my radicalism and my blackness. And as a result, I remained in the faith and in the church, or maybe it remained in me.

Archbishop Welby’s recent intervention on predatory capitalism – via Amazon – was welcome. It was long overdue and a return to purpose for the establishment church. If the church isn’t going to check unchecked power: then what is its purpose? It is time now for the church to check its own power. Its white power. Its perhaps inadvertent role in the perpetuation of racism in today’s world.

Going forward I will not in good faith compromise: either the church is for tearing down racism or upholding it. If it is for the former than the white silhouette that has been used for centuries to symbolise and cascade white superiority that continues to hang tall and beautifully in many a church has to go. It is an abomination. An enormous affront. 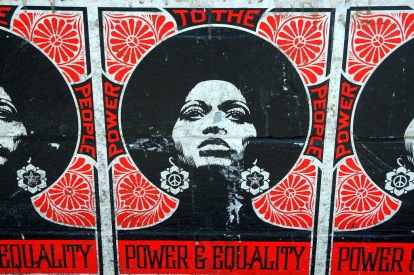 apologies, protection and gratitude for its continued relevance but it would be nice if it started paying us back by tearing down the inadvertent racism symbols it often places on its walls and windows. Retire White Christ. However, if the church must have a human symbolism of God then let it be the most beautiful, accurate and original personification of God ever known, let it be the most loyal member of the church: a black woman.

Nels Abbey is a writer and media executive based in London. His debut book ‘Think Like A White Man’ will be published on Canongate Books in 2019. Twitter: @nelsabbey

One thought on “White Christ Must Fall”