Is knife crime a moral panic or a social epidemic? @KojoRTE argues that instead of the current opportunistic consensus between both major parties we need a wide-ranging public discussion on the main indicators of youth violence which include household poverty, inequality and drugs policy.

Knife violence is highly emotive and traumatic, whether it’s the images of youthful victims or bereaved parents conducting marches to end street violence. Today, a majority of LabourList readers believe that the Labour Party should back stop and search to deal with knife crime. Everyone wants something to do be done but the question is what and how?  Trying to reduce youth violence particularly knife violence motivated a lot my politics, I grew up and still live in an area that has a lot of it. Several young people on my street and from my former primary and secondary schools have died as a result of knife violence. However let’s consider the state of the recent national debate in the UK:

It took Good Morning Britain’s weatherman, Alex Beresford, to argue that prisons do not work in response to a representative of the Police Federation who chundered that more prisons should be built. Apart from that moment of sobriety, the above proposed policies do little else but form a vicious greed for greater state repression. There should be a wide-ranging public discussion on the main indicators of youth violence i.e. household poverty, inequality and drugs policy. But instead we have a morbid opportunistic consensus from Labour’s Jeremy Corbyn to the Conservative Home Secretary to build more weapons that will further entrench Britain’s racial and class hierarchies.

As UK author and rapper Akala succinctly pointed out, the issue of youth violence is not new. From Shakespeare to the gangs of Glasgow, though it has long existed, recent generations have treated youth violence with a sense of moral panic. The late and great Stuart Hall explains in great detail in the seminal book “Policing the Crisis” that the courts, police and media are not passive reactors to any perceived crisis but are active participants in constructing it.

The book references the early 1970s “mugging crisis” and follows this pattern:

First, media editors depict a threat to society, an indication of rapid decay or decline to normality. Thus the threat is simplified and made symbolic by either a folk devil or a pure innocent victim. Next, the widespread concern is backed up by supposedly cold facts but police and politicians decide what statistics are gathered, how they are collated, and when they are meaningful. Authorities and courts then respond to the threat, i.e. when and how to enforce increased prison sentences for would-be perpetrators. Lastly, the panic and subsequent response together set out the context for new laws and more resources for state enforcement.

“In 2007, there were 10,000+ more police officers then there were today, but this did not prevent the then historic high, weakening Corbyn’s Labour Party and Commissioner Dick’s claims that police numbers are significant. Evidence that increased stop and searches prevent violent crime is similarly unconvincing”

The discourse between political figures and the media confects a particular social phenomenon into a moral panic, which sets the stage for more tools for social control. The seemingly neutral facts are editorialised and distort the scale and history of youth violence. Is knife crime a moral panic or a social epidemic?

According to NHS Digital, the year 2007 has the highest recorded number of sharp object related hospital admissions. That year also had the recent high of teenage and overall stabbing related deaths (272) until March 2018. While stabbing related hospital admissions haven’t peaked beyond the 2007 figure, related deaths reached a new peak of 285 the year to March 2018. Any increase is troubling ,but an increase of 13 doesn’t suggest we are living in unprecedented time requiring a national emergency. Let’s dig deeper into the proposed solutions. 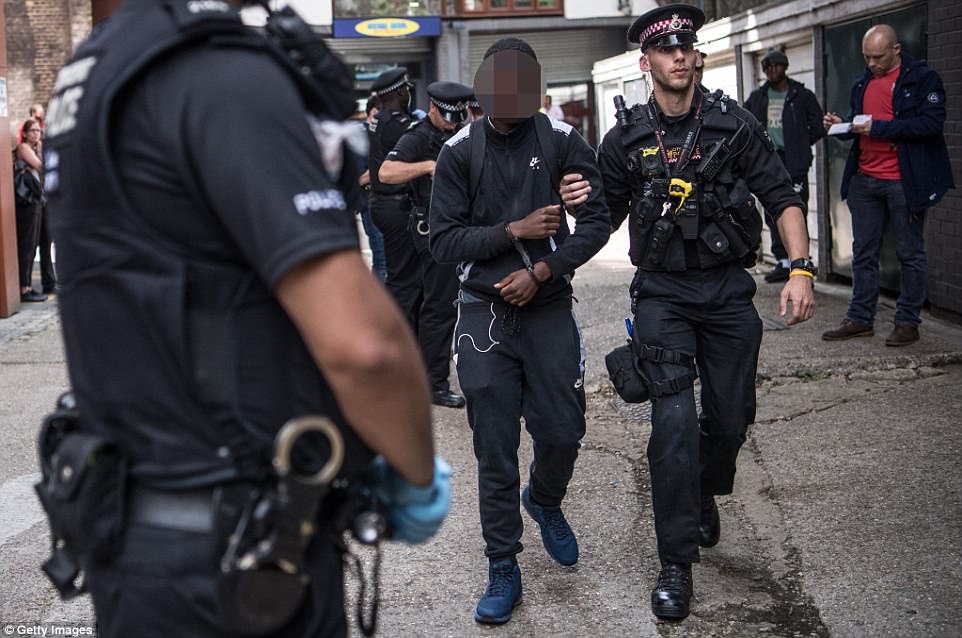 Again in 2007, there were 10,000+ more police officers then there were today, but this did not prevent the then historic high, weakening Corbyn’s Labour Party and Commissioner Dick’s claims that police numbers are significant. Evidence that increased stop and searches prevent violent crime is similarly unconvincing. Home Office research in 2016 concluded that mass use of stop and search doesn’t reduce crime. The College of Policing commissioned a study called “Does more stop and search mean less crime?” the answer in terms of violent crime was no, there was no meaningful effect.

Research for Police Scotland in 2016 found young people’s experience of stop and search resulted in them questioning whether they should leave their home, their freedom of movement and that it worsened their attitude and behaviour. See image below. This chimes strongly with young people’s articulated experiences in London in relation to the 2011 uprisings. It demonstrates that stop and search is only effective in harassing and intimidating young people but the outcome isn’t crime reduction but controlling movement through fear. 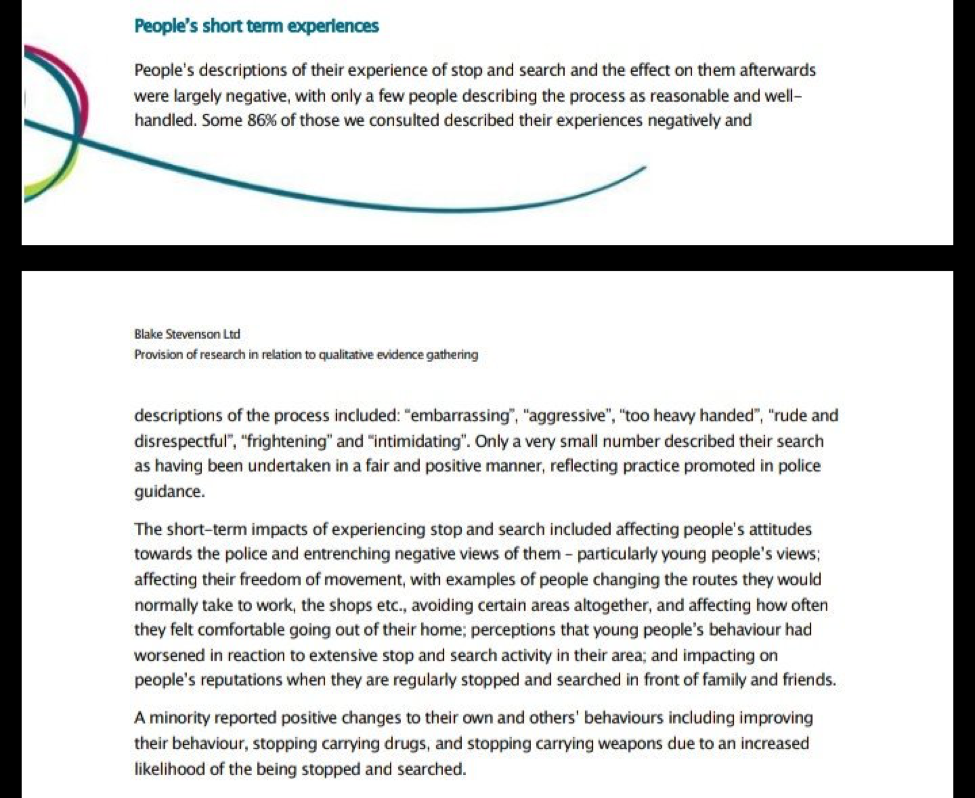 Sadiq Khan, the Mayor of London, agreed in 2018 to increase the use of Stop and Search despite pledging in his election bid to do the exact opposite. The Mayor’s office for policing and crime (MOPAC) released statistics in 2019 showing that in 2018,  disproportionate use had increased. Black people were now 4 times instead of twice as likely as white people to be searched. This contrasted with the fact that black people were also less likely (16%) than white people (20%) to be arrested after a search i.e. nothing criminal was found. Also important to note that conviction rates are even lower than arrests. If this wasn’t enough, even a serving Metropolitan Police Officer and the President of National Black Police Officers Association says stop and search is harmful to fighting knife crime because of the poor community relations it generates.

These irresponsible demands are being made at a time when we know the demographics of children and adults who are disproportionately stop-searched, victimised by police brutality, strip-searched, prosecuted for minor infractions and when convicted receive above-average sentences. Despite the recent 20th anniversary of the Macpherson report, it is remarkable that no major politician appears to have any idea what institutional racism in the British police forces even looks like, nevermind resist it. So leading politicians and their cheerleaders are continuing a very British tradition of claiming to help people and communities racialised as black and brown through promoting their greater criminalisation and state persecution.

While there are no alternatives in parliament to reducing youth violence without repressing working class communities, they do exist and require building a social movement led by communities directly affected to win them.

1. Eliminate household poverty and deprivation – Children at risk of carrying out youth violence, are often vulnerable themselves, living in financially insecure homes in communities facing high deprivation. So one key strategy would be to increase social security spending – end child hunger and guarantee decent housing for all. This would have to be beyond reversing austerity, as keen readers will note, austerity started in 2010, 3 years after the 2007 knife violence peak.

2. Follow Portugal and Decriminalise all illegal drugs – Portugal has shown that the best way to abolish illegal drug markets is to decriminalise them, illegal flows necessitate violent controls and organisations.

3. Ensure appropriate support services for all survivors of domestic violence – Many actors of youth violence have themselves been traumatised by witnessing street violence, domestic violence and/or trapped in a home where this is prevalent – so guaranteeing varied refuge shelter provision for domestic violence survivors, including ones providing support for specific racialised groups, is crucial.

4. Radically increase mental health provision for young people – Children’s access to diverse counselling and mental health services must be increased generally and particularly in acutely affected areas. This should be made available not only in schools but also linked to more youth workers and youth service provision. Racism in mental health provision as explored by Guilaine Kinouani is also an issue but would require a separate article to address it.

5. The decline in youth services and spaces are also a contributing factor, so any strategy to make young people safer should involve a new recruitment and fully funded bursaries to train local people with relevant experiences and connections to reverse a decade or more of cuts and diminishment.

“I will repeat my tired old refrain: it takes mass movements not well meaning policy heads or particular politicians to move the State away from greater violence to increased genuine protection of all”

While this logic also applies to education, it is not just a question of money but community control and representation. Academies have made schools less accountable (not that they were good prior), the structural discrimination in schools and the school-exclusion-PRU (Pupil Referral Unit) to prison pipeline is another story. So although school league tables may have contributed to the rise in expulsions, racism in education has a long, long history.

These ideas are unpopular in the national discussion as working class (both racialised as other or as “white”) peoples would disproportionately benefit and would restrict both capital and state to expand in accumulation and power.

So I will repeat my tired old refrain: it takes mass movements not well meaning policy heads or particular politicians to move the State away from greater violence to increased genuine protection of all. The State’s instrumentalisation of race and class works against these ideals so it must be fought for.

One thought on “Is Knife Crime really a national emergency?”

Leave a Reply to exploring art in the city Cancel reply