The condemnation of Ilhan Omar not only betrays hypocrisy at the heart of the US government, it also demonstrates how Black Americans are subject to disproportionate discipline and censure on a daily basis, writes Olivia Woldemikael

The public humiliation and condemnation of Congresswoman Ilhan Omar by Democrats, Republicans, and the American media is all too familiar. The outcry surrounding Omar’s tweets critical of AIPAC and her statements questioning Israel’s influence in American politics is more about the speaker than her speech. Omar’s actions and words never stood for themselves. Instead, they are interpreted within a racial context in which Black people are constantly sanctioned for their Blackness. Reactions to Omar’s speech are akin to the daily experiences of African Americans and Black people living in America who experience less public, though equally vitriolic, acts of silencing and humiliation.

A central component of the Black experience in America is punishment. Constant discipline reminds Black people that we are not an equal part of this nation, that we do not deserve to take up space, and there is nothing we can do that is not watched. The response to Ilhan Omar is a product of the same society that calls the police on Black people for doing ordinary tasks and living their everyday lives. We’re inured to the extremity of her censure because we are conditioned to bear witness to the condemnation and emasculation of Black men. We are used to images of Black people facing the barrel of a policeman’s gun, a phallic symbol of domination and a reminder of how disposable our lives are.

“If our society were hypersensitive to bigotry, in which politicians and their constituents used careful language, perhaps discussion over the nuances of Omar’s language would be reasonable”

Though public punishment historically and in present day is often seen as a male experience, Omar is a reminder that Black women are also the subjects of similar castigation. Black women’s state of existence is a violation in itself: our natural hair is deemed so unruly that girls are sent home from school and women denied work. In Omar’s case, wearing a hijab itself is a provocation. As a study of schools has shown, from childhood onwards Black men and women are too often seen as the criminals rather than the criminalised. The House of Representatives recently passed resolution against bigotry is merely part of the same cultural instinct to smother Blackness.

The real controversy is not about Omar’s words themselves. Instead, it is rooted in debates about the interpretations and implications of her statements. For example, critics read between the lines of her tweet, “It’s all about the Benjamins, baby”—a quotation of song lyrics – finding anti-Semitic tropes. If our society were hypersensitive to bigotry, in which politicians and their constituents used careful language, perhaps discussion over the nuances of Omar’s language would be reasonable. It would be in tune with larger cultural dialogue to ask whether the invocation of money in reference to a Jewish-dominated organisation can ever be free from anti-Semitic undertones. 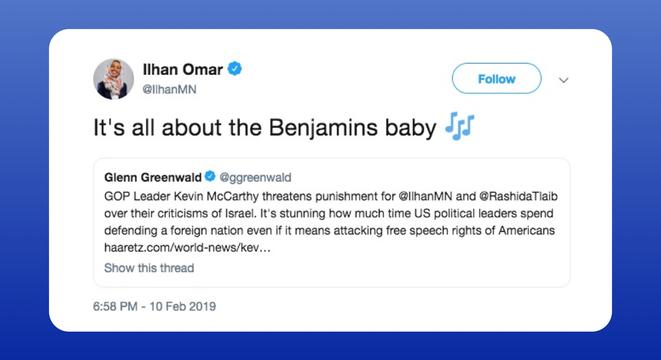 Yet, in present day America, bold and unambiguous anti-Semitism and other forms of hate speech are rampant. We’re currently in a political moment where unchecked bigotry reigns. Over the past year President Trump called for “a total and complete shutdown of Muslims entering the United States.” When the top leader of the country sought to ban an entire religious group from entering the US, there was no swift action in Congress to condemn Islamophobia. Photos of the Virginia state governor, Ralph Northam, surfaced showing him in Blackface – an act that is steeped in America’s history of oppression of Black people. There was no unified statement from Congress in response. The slew of anti-Semitic statements made by Republican politicians that contain everything from dog-whistles to outright prejudice were never met with such unified and pointed ire.

It is then perverse that the highly partisan American Congress comes together to crucify a young, Black Muslim woman for her cherry-picked words. It is all too convenient that anti-Semitism is pinned on the only Black, Muslim woman representative. All the while, anti-Semitism, in its most pernicious forms and that have had devastating consequences for Jewish people, has come from Europeans and those of European descent.

As a biracial and Black woman who is the child of an African immigrant, I feel my heart heavy with regards to Omar. I cannot imagine the volume of wrath she is facing, but I have an inkling of what it feels like to be the target of a visceral outrage aimed at erasure. These disproportionate acts of retaliation are not only attempts to ‘dim our lights’ as Omar put it, but to put them out completely. I think every Black woman, and likely many other minorities, have felt outpours of pure hatred for which our actions become a mere excuse.

It stems from the small moments and looks of disapproval, like stepping on a white American’s yoga mat. Or from being shamed for speaking about personal experiences of marginalisation as has happened in my own life—the worst instance in which a white woman interrupted a private conversation she was eavesdropping on to shout at me in public. These acts of chastisement have two effects: the first is a violence in the words and the action taken against you. The second is the humiliation in knowing that you have to take it.

The resolution and the public outrage in response to Ilhan Omar were not because she spoke out; they arose because she spoke at all. Ilhan Omar has made the best of the situation by refusing to back down and lending her support to a bill that was written to deride her. She is revealing to America its own bigotry and hypocrisy. I hope, as many young women of colour do, that she never loses her courage.

Olivia Woldemikael is is a writer and a former humanitarian worker with a passion for social justice. She is currently pursing a PhD in Political Science. Her work focus on migration, critical approaches to development, and African politics.