Recent allegations of human rights abuses by the WWF not only betray a colonial attitude to conservation abroad but also reflects attitudes to people of colour in conservation worldwide, writes Beth Collier

In the latest controversy for the World Wide Fund for Nature (WWF), they are accused of human rights abuses against indigenous and local communities in Africa and Asia, and having funded paramilitaries who have tortured, sexually assaulted and killed in the course of carrying out the organisation’s mandate.

Buzzfeed reporting has uncovered a catalogue of serious abuses – described as ‘atrocities’ by the Charity Commission, offering further insight into the ethics of this ‘corporate’ NGO’s operations, in addition to those previously reported by Survival International, the UN, and others over recent years.

WWF are alleged to have provided salaries, training and equipment including riot gear and night vision goggles to ‘eco-guards’ who have conducted dead of night raids on villages – which the NGO helped to coordinate – attacking residents with machetes and burning homes to the ground, as well as arbitrarily detaining, raping, torturing and killing members of local communities, in the name of ‘anti-poaching’ initiatives.

The NGO is accused of operating like a ‘spy master’ in rural areas near parks that they fund, using fear and revenge to coerce a network of informants to provide WWF funded park authorities with intelligence. WWF has denied knowledge of the eco-guards’ actions, however the same patterns of abuse have been seen across six countries in which WWF funds guards, over an extended period of time. Including Nepal, India, Cameroon, Central African Republic, Republic of the Congo and Democratic Republic of the Congo.

Despite denials, it is clear that the NGO has been alerted to concerns for years, it appears that WWF are content to offer lip service about change which doesn’t happen. Survival International stated, “It’s known for years that the paramilitary units it funds have beaten, tortured and killed, and its response is always the same – a smokescreen of meaningless promises of action, and then carry on as before.”

When a Nepalese farmer was arbitrarily detained, tortured and killed by WWF funded Chitwan National Park Rangers in 2006, three rangers were charged. The WWF lobbied against the charges, when they were dropped the NGO continued to fund the park and work with or reward the rangers involved.  One of the rangers wrote a memoir detailing his favourite interrogation technique as waterboarding.

WWF have treated complainants with total disregard. In 2017 an 11 year boy was tortured in front of his family in a WWF funded park in Cameroon, months later the WWF had still not responded to the village’s complaint. WWF’s parks have employed policies allowing ‘guards’ to kill trespassers, meaning many innocent locals accessing their ancestral lands are vulnerable and have been killed.

“The NGO and its guards have treated local people with contempt, supporting ‘fortress conservation’ with the formation of protected areas which bars indigenous groups in Africa, Asia and Americas – whose subsistence hunting is considered to have minimal impact on ecology – from their ancestral lands”

There is a very real and urgent issue of poaching which is decimating species populations; to be seen within the context of western and East Asian demand for animal parts and natural resources, local poverty and the disenfranchisement of local populations from traditional ways of living close to nature. But many of the indigenous and local communities affected by WWF sanctioned violence are not being beaten and killed in the context of their having poached wildlife.

Poachers are increasingly well organised, armed and violent. The NGO uses military terms to describe their work as being at war against poaching gangs and having ‘boots on the ground’.  However there appears to be a lack of discipline within their ranks and vulnerable and innocent local communities are being harassed and killed. Abuse revelations make WWF’s branding of paramilitaries as ‘eco-guards’ look disingenuous, as the role is performed in such a way as to oppress other humans as much as guard animals and ecology.

One group affected are the Baka communities of hunter-gatherers in the Congo Basin who depend on the forest for food, medicine, shelter and well-being. One Baka man told Survival International in 2015 “When they came to beat me here in my home, my wife and I were sleeping. They beat me with machetes. They beat my wife with machetes.” In 2018 another Baka stated “We have suffered so much. When you go into the forest they beat you, they [park rangers] destroy your house. We just want to be in peace in the forest.”

The NGO and its guards have treated local people with contempt, supporting ‘fortress conservation’ with the formation of protected areas which bars indigenous groups in Africa, Asia and Americas – whose subsistence hunting is considered to have minimal impact on ecology – from their ancestral lands, whilst colluding with western logging companies which have decimated large areas of bio-diverse forests. It is absurd.  Through the WWF, King Leopold never left the Congo.

The disregard for black and brown lives plays out the same story of our struggle in the west for our lives to matter to those with power. The eco-guards are not police officers but also participate in summary justice – determining a person’s guilt or innocence while the western NGOs look the other way – their purported cause more important than the details of pursuing it ethically and legally. They’re only poor black African and Asians, what does it matter?  But hold up, even if they were poaching why is it OK to kill them? Will this kill on sight strategy be used in the west and East Asia against those demanding animal parts, or on the logging companies which overreach the limits of their licensed logging areas? 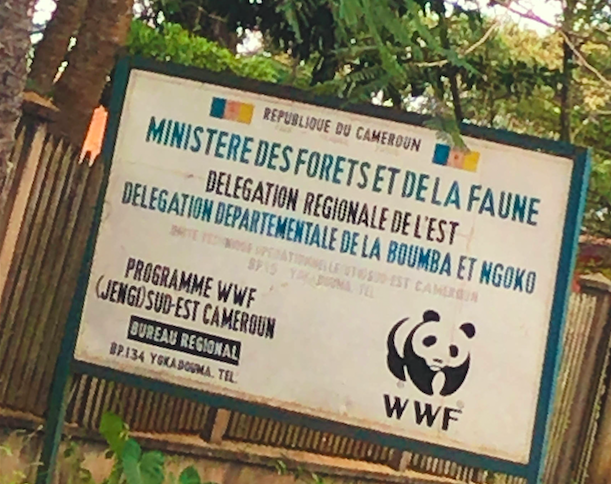 Kenyan conservationist, Dr. Mordecai Ogada has long questioned the narrative of western conservation charities operating in Africa with vastly different approaches on the ground than is depicted in western promotion, and the unflinching use of guns to patrol in Africa in a manner that wouldn’t be acceptable in Europe.

Local indigenous communities are being seen as collateral and time is not being taken to legally determine the difference between a guilty poacher and an innocent villager. Their lives are not being valued. Why have we allowed western organisations to use methods that would not be acceptable in the west? How have we allowed them to determine that it is easier to turn a blind eye to the killing of a poor African or Asian person who might or might not be involved in poaching than to do the detective work to arrest an affluent European/Chinese person funding the poaching or over logging?

The violence of WWF’s response towards local communities shows a colonial perspective in which local communities don’t need to be respected or consulted, that they should mind their business and consider themselves lucky benefactors of a superior hand.

Further adding to the colonial frame, the physical violence is rarely perpetrated by white westerners but by black Africans who they employ, making the NGO one step removed in the optics.  (Although western conservationists do seek the services of ex special forces and military personnel).

This is not the first time that the organisation has been accused of human rights abuses.  Founded by former Nazi Party and SS Calvary Corps member, and Bilderberg Group co-founder, German born Prince Bernhard of the Netherlands, the WWF has a long history of marginalising African, Asian and South American people. Previously known as the World Wildlife Fund, they have pursued policies which deem local Africans and Asians as the enemy and encourage perceptions of them being anti nature – when in fact they have lived in a symbiotic relationship with the natural world around them for millennia.

This condescending and colonial attitude towards black and brown people as unworthy custodians of nature extends beyond Africa, Asia and Americas to people of colour living in the west. Many of us are made to feel that we don’t belong in green spaces and have been subjected to a process of displacement or disenfranchisement from the land.

Attitudes of white environmental practitioners in the UK too often reflect the view that the space is theirs, that they are sharing it with us, that they must control access, that we can be there as followers but are resistant to us as leaders. Globally we are told that we don’t belong in or don’t value nature or cause harm to it.  The destructive irony being this psychological violence cleaves us from close contact with nature and the benefits that this relationship brings, whilst appropriating the knowledge of our ancestors to then position themselves as the true guardians of the natural world.

Although there have been recent improvements, programming from the BBC Natural History Unit has repeatedly offered a colonial and dehumanising lens, producing nature programmes where ‘natives’ are shown from a distance, depicted as if they are just another animal. Or where African and Asian people are altogether absent. When they are shown as a human person, paragraphs of speech are summarised by a narrator into just a few sentiments, rather than transcribed and interpreted as they are for white e.g. french and spanish speaking contributors.

Again there are parallels here with experiences in the UK where our lack of presence in nature is framed as ‘why do people of colour have a problem with nature?’ when the reality, based on my ethnographic research, is that many people of colour do have a strong desire to be connected with nature but don’t like how they’re perceived and responded to by white people in those spaces and the framing would better be ‘why do white people have a problem with people of colour in nature?’. Racism and colonialist attitudes interfere with how black and Asian people access nature.

With its considerable resources (more than £500 million income in 2017) why does the WWF not do more to challenge the wealthy European, US and East Asian markets who create demand, rather than punish the poorer African and Asians caught up in the territory where ‘western and East Asian’ crimes against nature are being committed?  Why do they not do more to challenge the practices of western logging companies against whom indigenous communities are powerless?

Why does WWF not embrace the wealth of indigenous ecological knowledge, looking up to communities’ considerable experience rather than disparage and dismiss them.  And ensure that the indigenous teaching is acknowledged and communities valued and remunerated.

As things stand, law firm Kingsley Napley have been appointed by WWF to conduct an internal investigation into the alleged abuses, but are considered by some to be mere ‘reputation management’ experts. The Charity Commission is also looking into the alleged atrocities and WWF’s due diligence.

At the moment conservation NGOs are getting away with the pretence that their mindset is not colonial.  It transpires that many local and indigenous groups were not liberated by independence in the 60’s, their lives are still being governed and ruined by a colonial oppressor – still in khaki clothing.

Beth Collier is a Nature based Psychotherapist and Anthropologist with a research background in human rights.  She is Director of Wild in the City, teaching natural history and woodland living skills. In her work she supports people of colour in finding their place in UK natural settings and creates opportunities for the representation of black leadership in nature.

We are 100% reader funded. If you enjoyed reading this article and you got some benefit or insight from reading it buy a gift card or donate to keep Media Diversified’s website online

Or visit our bookstore on Shopify – you can donate there too!