The day UN inspectors were to arrive in Damascus to investigate allegations of use of toxic arms, reports emerged of recent chemical weapons use in Eastern Ghouta located on the outskirts of Damascus. The casualty  figures range from dozens to almost 1200 deaths. Soon we were told by the US and the West that the Syrian government had crossed a “red line” by the use chemical weapons. Somehow deaths  caused by chemical weapons are unacceptable while those caused by bomb, bullets and shrapnel are somewhat acceptable to the international community.

President Obama had warned that America would act once the ‘red line’ of chemical weapons had been crossed, the line which was nonexistent and unheard of when Napalm was used in Vietnam or when weapons containing white phosphorus were used in Fallujah in Iraq or when Saddam flauntingly used chemical weapons against the Iranians with the blessing of the United States. 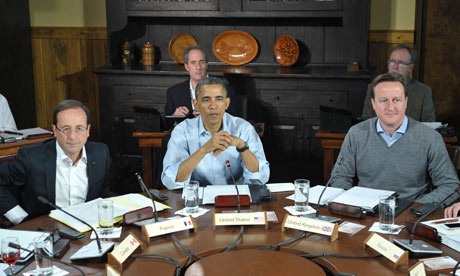 The war hysteria of the Western nations was not long in coming after the reports of use of chemical weapons in Syria. The French foreign minister, Laurent Fabius, said on Thursday that if the regime was shown to be responsible for the massacre, “we need a reaction by the international community … a reaction of force”. He ruled out the deployment of foreign ground troops but added “a reaction that can take a form, I don’t want to be more precise, of force” – raising the possibility of air strikes by western powers.

French President Francoise Hollande said France is “ready to punish” those behind the “chemical massacre” in Syria, and said that his government believes Damascus carried out the attack. Hollande appeared to argue that what he called a “responsibility to protect civilians” could override international law, which he said “must evolve with the times.”

A decision about the use of military force has not been made. The president is reviewing his options, plural,”

Despite the senior politicians’ assurances that no decisions have yet been taken, reports begun to surface on Tuesday that a military strike could by launched against Syria “within days.”

Unnamed White House officials told the Washington Post that Obama was considering ordering a limited cruise missile strike on Syria as early as Thursday. Other media sources claimed that any US attack was unlikely while the UN team remains in Syria, alluding that the strike would be on Sunday at the earliest.

Between all this war hysteria something escaped our sights, the stocks of Lockheed Martin and Raytheon traded at an all time high on the New York Stock Exchange on August 26. Lockheed Martin is the #1 defense partner of the US while Raytheon are the manufacturers of the much famed Tomahawk cruise missiles. On  July 31, 2013 Institute on the Study of War (ISW)[1] issued a study listing targets in Syria for Tomahawk missile strikes. It also calculated the potential number of missiles that could be used. Interestingly Raytheon is among many corporations providing funds to ISW to carry out their “study of war”(who better to fund the study of war than the ones who make profits out of it).

A Reuters/Ipsos poll released Sunday found that about 60 percent of Americans believes the United States should stay out of Syria’s civil war; only 9 percent favors intervention. If it is proved that Assad used chemical weapons, the poll found, support for U.S. intervention rises to 25 percent. But 46 percent of those surveyed — a large plurality — said that even in the face of such proof, the United States should not act.

Atlantic’s Conor Friedersdorf on why the honorable urge to “do something” about atrocities does not automatically mean dropping bombs:

The U.S. government could spend millions helping Syrian refugees… There is no shortage of humanitarian suffering for us to address, if that’s how we want to spend our money, and I am fine with spending more of it helping people.

But injecting bombs and cruise missiles into a civil war probably isn’t the most cost effective way to help people. It is certainly the sort of humanitarian assistance most likely to make us bitter enemies, which inevitably happens when you pick a side and start killing some of the people on it….

Hawks are most interested in humanitarian causes that can be carried out by force. There is no reason the rest of us should share their world view, given how many times it has resulted in needless slaughter on a massive scale.”

Usaamah Khan is a Pakistani national based in Islamabad. Currently he’s completing his degree in the field of accountancy. He’s a political enthusiast and hopes to give back to his community once he’s finally done with his coursework. Find him on twitter @Usamaa_K

Storify: #Syria And the Premature War Drums of The Western Nations”

Owen Jones: For the Syrians’ sakes and for our own, we must not intervene

Seumas Milne: An attack on Syria will only spread the war and killing

Das Spiegel:  The Obama administration gave green signal to a chemical weapons attack plan in Syria that could be blamed on President Bashar al Assad’s regime and in turn, spur international military action in the devastated country, leaked documents have shown.