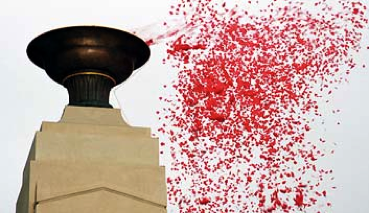 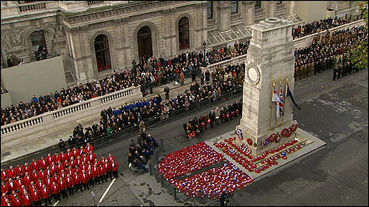 Scene One: 6th November 2002, Commonwealth Memorial Gates, London. The Queen inaugurates the Memorial Gates, Constitution Hill, Hyde Park. The main inscription of the Memorial reads ‘In memory of the five million volunteers from the Indian sub-continent, Africa and the Caribbean who fought with Britain in the two World Wars‘

Scene Two: 11th November 2010, The Cenotaph, London. The chimes of Big Ben are followed by a lone bugler playing the strains of the Last Post. A seven year-old Johnny Osborne, wearing a beret and his great-grand-uncle’s medals – who died on the battlefield in World War I – lays a cross with Flanders poppies inscribed with the words “Thank-you, for not forgetting”

Scene Three: 11th November 2010, The Albert Hall. A small group of Muslim protestors set fire to a giant poppy. During the two-minute silence they chant “British soldiers burn in hell”

As we approach the 11 November and the first world war centenary in 2014, the issue of not only what we remember, but how we remember and whom underlies the heated discussions that have been unfolding over the past weeks. Recent national opinion poll research commissioned by the think tank British Future for their report Do mention the war: Will 1914 matter in 2014? came up with some interesting findings,

Greatest support, at over 80%, is for a centenary that focuses on the importance of preserving peace, which commemorates the sacrifice of those who lost their lives, and which increases knowledge of the Commonwealth contribution, so that we understand the shared history of our multi-ethnic society.’

In WWI, one in five service people were volunteers from the Indian Subcontinent, the Caribbean and Africa. In WWII – three out of ten service people. Despite efforts to include of these Commonwealth citizens in public acts of commemoration such as at the Commonwealth Memorial Gates, the basis of their inclusion remains ambivalent. There is also the present to contend with. To counter impressions that British Muslims are unpatriotic because of their opposition to military action in Afghanistan and Iraq, mosques have been setting up poppy stalls and encouraging Muslims to wear the red poppy.

With this range of contexts and experiences in mind, we turned to art and poetry as a way to intervene in and re-route dominant narratives of remembrance. Is it possible to acknowledge the contributions of colonial soldiers without buttressing a jingoistic or militaristic British nationalism?

How does one tell and ask of war and loss across the generations, especially when, for so long, we have not asked or known how to ask or tell?

The film Remembrance (directed by Kuldip Powar/BFI) was partly a precursor to a public, art-based research project Noise of the Past, which offered a creative response to the exclusions of popular narratives of war. Some stories and bodies are drummed out of war and rituals of remembrance. Noise of the Past was an attempt to re-visit erasures and to put into play a series of interactions that question and provoke our capacities to remember wars beyond their nationalistic and militaristic framing. We explored the productive possibilities for inviting a different understanding and occupation of space – one, which might allow for altered national imaginations of how we sense and experience hitherto erased pasts.

The project brought together researchers and artist practitioners to unsettle social containers of war, memory and affect in an inventive tactile play of the past in the present. These collaborative exchanges unleashed tension. A sensory encounter – of poetry, historical documents, music, stone, stone, cloth and visual art – produced two related pieces of work: the film Unravelling (Kuldip Powar, 2008) and the musical performance Post–Colonial War Requiem (Francis Silkstone, 2008). Developed through a ‘call and response’ method marked by exchange and dialogue.

Activating a call and response, an inter–generational poetic dialogue in Urdu, provided the cue for both pieces of work. In this exchange Sawarn Singh, a soldier who fought in Burma, the Middle East and Africa and lost a brother (Amar) on the battlefield –  before moving to the industrial city of Coventry – responded to questions in poetry by his grandson and filmmaker Kuldip Powar.

The poetry records a search by a grandson to bring forth his grandfather’s shrouded memories of war. It is a tentative careful unravelling of Singh’s memories and experiences. The anguish and frailty of his voice resonates throughout the poetry, yet his account is not one of mere testimony. It is through an Urdu poetic register and the grain of Singh’s voice that we feel his lament. Below is an extract from the poetic exchange (both in its transliterated Urdu form with English translation).

These artistic exchanges created a multicultural and post–colonial perspective to the WWII blitz as well giving recognition to the post-war energy of renewal and peace, which built the new Coventry Cathedral. This site was one of the first points of call to the project.

The opening of Basil Spence’s new cathedral on 30th May 1962 took place against Benjamin Britten’s War Requiem, representing post–war hopes. The cathedral was built to face the ruins of the original that was bombed by Luftwaffe’s Operation Moonlight Sonata on the 14th November 1940. With Wilfred Owen’s war poems from WWI interlaced with the Latin mass to commemorate the dead, Britten’s Requiem warned of the horrors of war. It is said that Britten gave a voice to the war dead as they mourn the choices made by the living. Similar to other post–war remembrance ceremonies, the lives and perspectives of the colonised in the wars were absent.

As the Cathedral became a focus for national renewal, an increasing number of families from the ex–colonies were moving to urban cities such as Coventry. Many of them had themselves been in WWII or had close family and friends who had fought in both wars. Yet a disjuncture and disconnection continues between the losses of those from the colonies and public memorialisation.

The implications of this civic amnesia are felt publicly and privately. Most notably the right to belong is tied to who is seen to have fought and spilt their blood for the nation. Even when those who are forgotten are included in the diversity drive of museums to recover invisible and hidden histories, the framing is such that the shroud of nationalistic militarism usually looms large in remembrance rituals.

Within the space of Coventry Cathedral Noise of the Past sought to renew both the civic resident narratives of the cathedral as well as the spirit of Britten’s War Requiem in order to re-connect it with other lives through the Urdu poetic exchange. In the context of new global wars today, it aimed to re–route our imagination of war atrocities through the art of dialogue.

On the evening of 8th November 2008 both the film and music performance were opened in the cathedral. The date was especially chosen because it was in the middle of the annual season of remembrance that marks the national calendar. This was a public intervention to re-think what is normalised as a holy ‘season’ of events. Noise of the Past was also pitched in another municipal calendar, Coventry’s Peace Month, which is an annual occurrence.

Noise of the Past did not seek to please any one audience, group or public. In this respect, the project aimed to engage with existing currents of nationalist sentiment and remembrance, and re-route these towards more immersive, open-ended and ambivalent ways of belonging to an inclusive multicultural nation. We set out to generate new publics, sentiments and associations through the mixing and intermingling of space, art, sound, people and politics.

For further details see: Noise of the Past

Dr Nirmal Puwar is a senior lecturer in the department of Sociology, Goldsmiths, (London). She is the author of Space Invaders: race, gender and bodies out of place (Berg, 2004). She has co-edited several volumes, including South Asian Women in the Diaspora (2003), a special double Issue of Fashion Theory on Orientalism (2003), a special issue of The History of the Human Sciences on Intimacy in Research (2008) and a special issue of Sociological Review on Post-colonial Bourdieu (2009). In addition as a member of the editorial collective of the journal Feminist Review, she has co-edited ten issues on a range of topics, including labour migration, fashion, Italian feminisms and empirical interrogations.

Dr Sanjay Sharma is a senior lecturer in Sociology & Communications, School of Social Sciences, Brunel University. He is the author of Multicultural Encounters (Palgrave, 2006), co-edited the collection Dis-Orienting Rhythms (Zed book, 1996) and a special issue of the journal Theory, Culture and Society on ‘Music and Politics’ (2000). Recently he co-founded the radical online race journal darkmatter, for which he has co-edited a special issue of ‘Race/Materiality’ (2008). He has published widely in the areas of critical multiculturalism, radical pedagogy, racialized subjectivity and cultural politics.

Kuldip Powar is the Director ‘Unravelling’-a journey into war, memory & loss, in collaboration with Nitin Sawhney and Goldmiths University and funded by the ARHC. He has worked on various film projects that explore the lives of Asian people in Britain. Completed a short film piece Remembrance (2005) funded by the BFI ‘Screen Rootz’ Initiative, poetically exploring post-colonial memory of WWII vis-à-vis personal testimony and narrative. He co-Directed the film, Kabhi Ritz Kabhie Palladium (2003) about the social cinema scenes amongst the South Asian diaspora communities of Coventry and created an oral history archive and directed a documentary (For the Record: the social life of Indian vinyl in Southall (2008). Kuldip has worked for the Sorrell Foundation on the ‘Building Schools for the Future’ programme as a Project Facilitator;  an ‘Associate Artist’ for Tamasha Theatre Company, co-leading ‘Small Lives Global Ties’ Writers Group; and the Royal Court Theatre on the play ‘Westbridge’.