One of the most marginalised and often unheard groups in the United Kingdom today are the homeless. Not only do these individuals and families face challenging life situations, they also carry the burden of stigma and stereotypes meaning that they are silenced.

In a bid to challenge this silence and educate people about the reality of homeless people Farah Mohammoud, Co-founder of organisation You Press, brought together two often neglected groups in society today; the homeless and young people. The result was the conception and delivery of ‘One Story, Our Voice’, a powerful project through which individuals from both these groups were able to exercise their creative freedom, express themselves and tell the world what it really means to be homeless and serve as a reminder that behind every statistic is an individual.

Media Diversified spoke to Farah to find out more about how the project came to be and the impact that it has had.

Statistics regarding homelessness in the UK are not often discussed by mainstream media meaning that many people are oblivious to the issue. In terms of numbers what is the reality regarding poverty, social exclusion and homelessness today?

From my research I found that 1 in 10 people say they have been homeless at some point in their life and a fifth of these people experienced this in the last five years. Last year 113,260 people in England informed their local council that their status was homeless, an 11% increase over 2 years. A March 2013 study by the Poverty and Social Exclusion research team from Bristol University found that almost 18 million people in the UK cannot afford adequate housing conditions and 14 million cannot afford one or more essential household items. In addition to these shocking statistics, the research also identified that 12 million people are too financially unstable to engage in common social activities which are enjoyed by the majority of the population. Furthermore, 5.5 million adults go without essential clothing and 4 million children and adults are not properly fed by today’s standards.

Tell us a little more about the ‘One story, Our voice’ project

The concept behind the project was to give homeless people a creative platform through which they could express themselves. Despite having the idea in mind I had no resources or wherewithal on how to fuel it. Through a variety of avenues including forming a partnerships with Caritas Anchor House, a residential and life skills centre for single homeless people, the idea developed to become a community interest project involving over 40 people including; 10 homeless people, 14 talented poets, spoken word artists, musicians and 20 volunteers that also included filmmakers, photographers and a DJ.

We organised 7 workshops in East London where the 10 homeless people worked with the creative artists and decided how they wanted their stories to be told. The name of the project, ‘One Story – Our Voice’ was collectively decided by all those involved, one of the things we wanted to encourage was for people to embrace their creative freedom and voice.

The project culminated in a high profile, youth enterprise-initiated event held on Friday 25th April 2014 at ‘Spotlight’ in Tower Hamlet (given to us for free by Poplar Harca and supported by Aspire Foundation, Pret A Manger, Sainsbury’s and Lyrix Organix.) The event was a mix of poetry readings, spoken word and musical performances which were borne out of the collaboration between the homeless people and artists involved in the project. 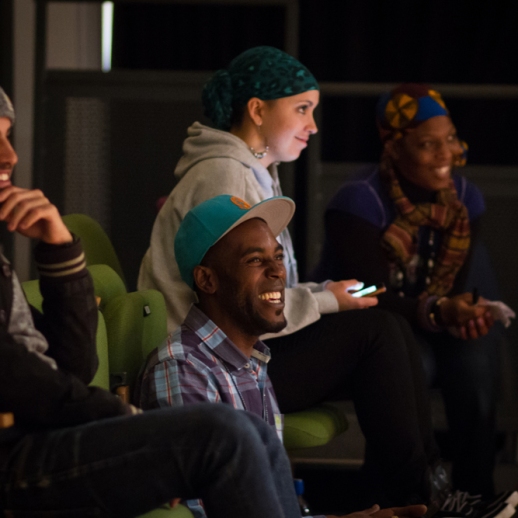 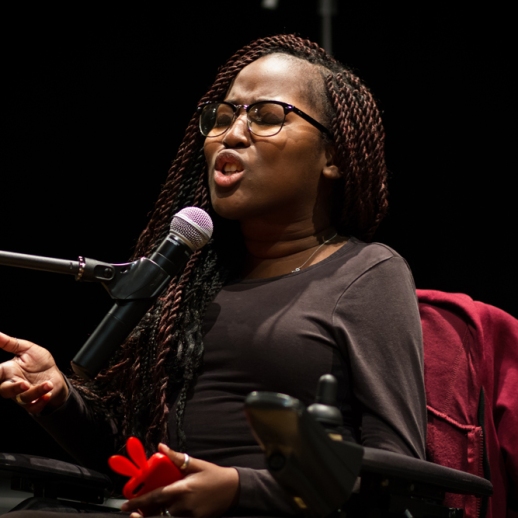 What inspired you to set up One Story- Our Voice?

I am interested in the art of storytelling and the impact that it can have on people. After I came across the troubling statistics around homelessness in the UK, I felt compelled to do something to explore and give voice to the unheard stories and experiences of homeless people. Along with this I am a co-founder of an aspiring social enterprise called You Press, through this organisation I had noticed how popular poetry and spoken word events were in London, particularly among young people. This inspired me to tap into this ‘market’ and bring together young poets and musicians to empower those homeless individuals who are often vulnerable and socially excluded from society.

‘One Story- Our voice’ put the spotlight on homeless people in this country through involving poets, spoken word artists, musicians and so on. Why did you choose to deliver this project through creative means?

My decision to use poetry to highlight the issues around homelessness was very personal. I come from a Somali background and in my culture storytelling and poetry is the method through which we pass on our history. Before the civil war in my country, poetry was one of the most powerful methods of communication used to inform people to tackle social issues. Therefore, knowing the power of poetry I felt it was the ideal creative art form to express issues around homelessness. This was confirmed to me when during the project I heard lyrics of a song which were the result of the collaboration between a young homeless man and one of our poets;

this captured the essence of the project.

A magical element of both the project and the event itself was the emphasis upon community cohesion and diversity, why was this so important?

Homelessness can happen to anyone at any time regardless of gender, age, ethnicity etc. I live in London, which is considered to be one of the most diverse cities in all of Britain with 40% of the residents belonging to an ethnic minority, speaking over 300 languages. Almost every race, nation, culture and religion in the world can claim at least a handful of Londoners, making community cohesion and diversity very important if any change is to take place in terms of both tackling homelessness and how it is viewed.

Also interesting is the fact that you primarily focused on bringing together both young people and homeless people- often two of the less heard and neglected groups in the Country, was this a conscious decision?

Yes, this was a conscious decision because at You Press, we believe in the in the greatness of young people and our mission is to provide a platform for them to share their opinions through writing and the arts. For example, we started out as a social action campaign to challenge the negative perception of young people in the media. Soon after our first media partnership was developed with The Guardian, we successfully launched a youth focused series called ‘Youth Tell Us’, publishing articles written by young people on various social issues that included Education, Political Participation, Employment, Sexual Health and Multiculturalism. We went on to win 1st place at the International Citizen Media awards held in Germany which acknowledged our dedication to involving citizens and volunteers in developing and setting up an active civil society. Therefore it was incredibly important to ensure that our commitment to young people formed part of this project to keep the momentum going.

At the event itself you had both homeless people and the creative artists collaborating; what were some of the highlights of both the event and the project?

Homeless people often live chaotic and isolated lives and so working toward the event in a positive environment empowered them. It not only helped to build their confidence but it also increased their employability skills by supporting them in rediscovering and developing their soft skills. In fact during the project two homeless young people found employment. The project allowed organic dialogue to take place between both the homeless people and the artists which resulted in the sharing of stories and experiences. It was wonderful to see the impact this had on the artists and the way in which they were able to turn the stories shared with them into powerful poems and music that not only challenged the perception of homeless people but also educated the audience that homelessness can happen to anyone at any time.

On a personal level what impact has the whole project had on you?

On a personal level the project has given me a different insight into the lives of homeless people. I am no longer able to walk past a homeless person without taking a moment to talk to them and ask if I can help in anyway. Interestingly, since the project ended I find myself in situations where I end up having lengthy discussions with people who believe that the homeless are to blame for the situation they find themselves in. In most of these discussions, the common belief is that we live a benefit-state country and therefore no one can or should be homeless’, I am able to challenge these views through my knowledge and experiences. The project has also inspired me to believe in my ideas and to never give up, regardless of any challenges that I may face

Homelessness is often understood as simply being about not having shelter, how important is it to eradicate this myth?

Being homeless is not just about having a roof over ones head and inadequate housing and poverty also form part of the experience of being homeless. Homelessness can have a heavy psychological impact upon individuals, families and communities affected by it. With our project we have shown that behind every story there is a person just like anyone of us, who have gone through difficult circumstances that has led them to become homeless, it is a multi-faceted issue.

In terms of the future, do you have any plans to build on the project and such a successful event?

Currently we are in the process of producing an album featuring the ten powerful life stories of homeless people which were delivered at the ‘One story, Our Voice’ event.

This was our first major initiative and we plan to deliver more innovative and empowering projects which not only educate young people but also challenge the perception society has of youth.