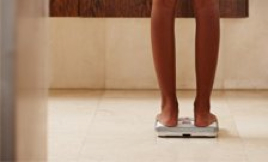 “You have such a beautiful face; if only you lost weight it would not be such a waste” said one ‘auntie’ to me when I was 6 years old. Soon after, I heard two of my mother’s friends pull her aside and say “You have to watch her weight no one wants a fat girl”. That same year at school the teacher went around the classroom and asked everyone what they wanted to be when they grew up, ‘doctor’ said one person, ‘astronaut’ said another, and finally it came to my turn “thin and beautiful” was my answer.

For this was the dream, to be thin and dare I say it, over 20 years later I still have many days where it is all I can think about. I continue to herald a belief that my body is a work in progress and though I am not medically considered to be overweight my mind has been hijacked by certain body ideals promoted by Western media that have spread to other parts of the world.

From a young age I had been conditioned by some female members in my family to believe that being ‘slim’ equalled success, it was an aspiration, an achievement and frankly without that body, one was doomed to failure in every area of life. Ironically these women had grown up in India and Sierra Leone at a time where the concept of perfect bodies, size zero, diet plans, toned stomachs, thigh gaps and so on just did not exist. My grandmothers were both on the larger side their whole lives and were held up as the equivalent of today’s sex symbols, (Of course for their generation colourism was the evil which dominated standards of beauty). For my aunties however, being fair was just one obsession and as they succumbed to Eurocentric ideals of beauty they rejected the notion that one did not have to be slim to be considered attractive. For some it happened through relocating to the UK and USA while for others it was the subtle influences of Hollywood seeping into societies which had previously been indifferent to the concept of ‘thinness.’

For them by the 1980s in came the Jane Fonda workout video and out went the biryani lunches, the obsession with being thin had taken over one which has been inherited by my generation and will no doubt be passed on to my little nieces and nephews.

Being exposed to these messages meant I felt an immediate sense of not being accepted as I was, this combined with the fact that I had just moved to the UK led me to struggle to adjust to life from a young age. The more uncomfortable I felt, the more I ate and the more I put on weight, trapping me in a vicious circle. Though I grew up in a household where my parents gave me every freedom, I continuously felt I was straddling two different cultures and failing to unify them. (It was only recently that I came across a study titled ‘Effect of Western culture on women’s attitudes to eating and perceptions of body shape’ which suggests that eating disorders ‘may result from either the process of assimilation or from the stress of trying to navigate two distinct cultures.’)

At the age of 13 I would buy teenage girl magazines such as ‘Bliss’ and ‘Sugar’ and the only faces and bodies I saw in them were of young, slim, white women. This combined with family pressure led me to begin dieting. Throughout my late teens images of my head stuck on the body of Victoria Beckham and Christina Aguilera graced my bedroom wall.

Fast forward ten years and I began properly losing weight which gave me validation like I had never experienced before, those same aunties would greet me as if I had won a Nobel Prize or been named Britain’s Next Top Model. As other areas of my life spiralled out of control I became obsessed with how to sustain this weight loss. The answer came in the form of starvation, purging and laxative abuse; it started subtly, yet before I knew it at the age of 25 I had turned into a bulimic while also displaying characteristics of binge eating and anorexia.

When finally it did get too painful I did some research into it, the only anorexics, bulimics and binge eaters I could see on eating disorder websites or profiled in the mainstream media were white women, also I have recently realised that it is very much marketed as a ‘western’ disease. I did not see stories featuring women of colour speaking about lying in bed at night poking at their bellies and fantasising about cutting all the fat off or spending hours on end beating themselves up for having 10 calories more than they should have done. Absent were the voices of women that looked like me and talked about the agony of sticking a toothbrush down their throats in order to purge or the way their hearts sank when they woke up and saw the sun outside because it meant wearing a huge coat to cover the failure that was their body was not an option. Invisible was the British Asian woman describing the overwhelming compulsion to binge eat after days of restriction or the black woman not able to walk down to the corner shop because she felt too fat for life, possessed by dysmorphic sight. 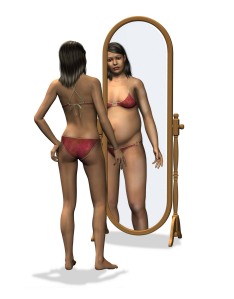 It was as if I was the only woman from an ethnic minority background living with this madness in my head; eating, overeating, starving, bingeing, purging, walking 12 miles a day, cutting myself and trapped in a constant internal atmosphere of self hatred and no esteem, body checking every 10 minutes. However, this was normal because brown girls did not get eating disorders and therefore I was just making it all up in my head. I just needed to be thin.

Being lucky enough to have parents who did understand mental health, my family intervened and I visited a therapist who was convinced that my eating disorder must stem from the fact that I came from a ‘culture which oppresses women.’ A white woman, she wondered if my anxiety came from the fact that I “came from a background where forced marriages were the norm and I may be fated for one” (Never have I faced any pressure on the marriage front!) On another occasion I mentioned that I was worried about a family gathering where I knew people would say things about my weight and the fact that I was dating a black man, her response was “people have better things to think about than your body and life.” Her continued postulations based upon stereotypes along with dismissal of certain elements which were a part of the British-Asian environment I had grown up in led me to realise that many of those working in the field of eating disorder treatments fail to acknowledge nuances between cultures and treatments and must take an intersectional approach.

Eating disorders go deeper than just being about seeking comfort in food or wanting to be skinny, underneath are a myriad of issues including want for control, low self esteem, anxiety and depression, they cut across race, age, gender and sexuality and research has shown there is also a genetic element to this illness.

I have friends from the Afro-Caribbean community who have had experiences similar to mine, they too speak of the pressures from their families about losing weight, this despite the fact that some of them come from cultures where, for want of a better phrase ‘curves’ are appreciated. However these curves must compliment certain other attributes including being in proportion and having shape. Much of the rhetoric reinforced around this for them is that certain body ideals will attract the right kind of men; patriarchy at its finest. In our discussions we found that one reason for our silences is this dismissal or lack of awareness in some cultures around the seriousness of mental health issues like eating disorders. We also discovered the huge number of people in our communities who live with binge eating disorder, an illness hardly ever mentioned in the mainstream and one which leaves sufferers enveloped in a feeling of constant shame as they eat away their feelings.

This piece is not a call for all people of colour who are living with an eating disorder to feel pressure to tell the world about it; it is about acknowledging the failings of mainstream media and health services to highlight what is an issue for men and women from ethnic minority groups. The National Eating Disorders Association of the United States stated “Due to our historically biased view that eating disorders only affect white women, relatively little research has been conducted utilizing participants from racial and ethnic minority groups.” Numerous studies claim middle-class white women are more prone to having eating disorders and of course this would be the conclusion when ethnic minority cases of the same are underreported.

Would I have developed an eating disorder had certain concepts not been fed into my consciousness at a young age? Possibly because of my family genes, however nurture is considered to be a huge factor in the development of this illness.

You will notice that I have not put my name to this piece. I am a journalist who covers East Africa and International affairs who is trying to build a career. I was reminded by numerous well-wishers what revealing my identity would have a negative impact upon my professional progress and reputation. The stigma around eating disorders would have people thinking twice about whether to recruit me or to send me out on humanitarian missions. So in order to continue being able to pay my bills I have chosen to be anonymous and this too is an example of just how unaware many are when it comes to eating disorders.

The day I was due to submit this piece a British-Asian woman at my gym said to me “It’s good you workout, you don’t want to end up being big and then left on the shelf. You want to be thin so you can find a man.”

As the negative voices returned after that conversation I remembered Thandie Newton speaking out about overcoming her eating disorder and poet Warsan Shire writing ‘I survived bulimia’. It gave me hope that I too will overcome this and was a reminder that as people from ethnic minority groups action around awareness starts with us.

If you are suffering from an eating disorder please see your GP as there is so much support available.