If I scream in an empty room, will you hear me?
She asked
Because sometimes this feels like an empty room
She said
When you rush past me, in your busy moments,
With colours I don’t recognise,
Sounds that don’t feel familiar,
And smells that itch my skin,
My toes inch forward, in slow motion, across the cobblestones,
Whilst you whirl and whirl about me.
She whispered
Bodies blurring into an air stream,
Around me.
She breathed
I want to feel walls, I want to touch the sides
Know there are boundaries,
My fingers trailing across wood, stone, brick.
Floor solid under my feet
Something I can grip on to
Something I know is mine
Something I can be enclosed in
Something to hide me from the rush of all this new-ness
She wailed. But no one heard, in this new life of hers

The migrant woman occupies a strange and troubling place in our contemporary world. Wherever she goes, she stands out. At the same time, she is hidden in plain sight, her uniqueness dissolving into the collective identity of an undifferentiated group –‘migrants’- that is routinely vilified and othered. As a practice-based researcher within performance, I have been interested to depict and disrupt these processes of othering by exploring the spatial and sensual dimensions of home-making for migrant women. I have done this by looking at the cultural practices of Iban women[i], and mapping these practices on to the real stories of migrant women, presented as performance pieces. Matters of home, belonging and identity have been key to these performances and it is through poetry and the art of weaving[ii] that I have discussed and presented ideas about the in/visibility of migrant women and what is entailed in making a home.

My use of poetry is based on Iban performance poetry/storytelling – a form that is called the pantun. It is through stories that I have tried to show the visceral experience of home building for individuals and communities in contemporary spaces. 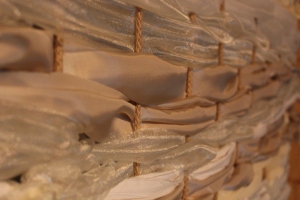 I have used the loom as an object within (the playing) space to be worked with and through the loom I have created props and a set. Iban women’s weaving is a parallel prestige system to the male Iban’s warring prestige system. It is also built around the idea of women’s stillness, in opposition to the movement of men (Drake 1991). Stillness for many of us is a vital part of establishing a home. Yet, the capacity to act or to have ‘agency’ is so often framed in terms of movement. As the social scientist, Irene Gedalof, has pointed out, ‘Western thought associates movement and travel with self-actualisation and agency’ (Gedalof 2009:91).

It was important to me to try to re-think and revalue the practices through which stability is created – if only temporarily – in a migrant’s life through the labour and agency of staying put, of grounding and re-grounding a precarious existence.

When I staged the above poem, the performer was placed in a stark spotlight, against a white loom[iii]; through this image we see the hidden migrant women battling with being invisible in and amongst people as they “whirl and whirl about me”. The chorus, hidden in the semi-darkness in the rest of the playing space, acts as a kind of enveloping cloth, weaving (layering) voices around her, protecting her and shielding her from “all this newness”. In this piece we can feel and catch sight of the relationships between in/visibility and othering; how a sense of self can be eroded and the consequences that might emerge from those feelings. The migrant woman seeks to weave a cloth of protection. She works hard to recuperate a sense of self within a new and unfamiliar space.

She (the protagonist of this story/poem) hides behind her otherness and wants to fabricate a space reminiscent of home. She wants to build up walls to stabilise herself. She wants to confine herself to a space that feels comfortable and safe. She wants to build a homeplace where she is not the Other. This story also tells of the physicality of belonging in a space – the need to have “floor solid under my feet, something to grip on to”; a space to hide away in and a space to stand up in; not be pushed against a wall, hidden in plain sight. This space that she wants to build is akin to bell hooks’ notion of homeplace as a ‘site of resistance and liberation’ (hooks 1991:43). For hooks, the homeplace provides a site of safety from oppression. It is an idea that hooks augments by drawing upon the Vietnamese Buddist monk Thich Nhat Hahn’s explanation of resistance as a location from where you can re-establish the self.

The loom was woven with white cloth and throughout the rest of the performance the projections were at times clearly visible; there were individual faces, the colours of other spaces, and yet it was difficult to make out the details because of the textured loom. Through the action of building a space to exist in, to feel safe and grounded in, the migrant woman continues to blur the lines of visibility and invisibility. Her space is clearly marked out. Her home is created within dwellings where scents, sounds and colours seep out into the space, flagging her presence while masking her uniqueness – she is simultaneously obscured and stands out as the Other. 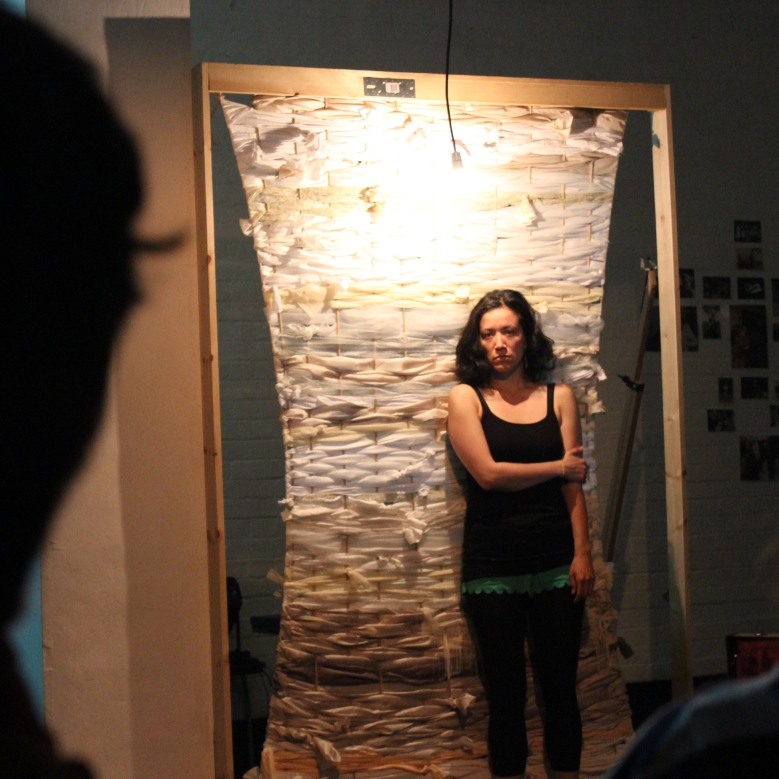 In this doubled position, her presence is simplified. For me, this reductiveness is part of the machinery of othering the migrant woman, which the feminist theorist Lugones sees as taking place, ‘while we are in their midst’ (Lugones 1987:394). Lugones explains that such a rendering is a way to block and impede identifications with the Other and to keep the migrant woman isolated and separate.

So it is through the valuing of stillness, the grounding and (re)building work that migrant women do in new spaces, that we can begin to understand or sense their complex and singular identities – their humanity. And slowly, she begins to come into focus, a sharp picture, and pixelated images fade from view.

[i] The Iban are an indigenous tribe in Borneo, predominantly in Sarawak, a state of Malaysia.

[ii] Iban women weave blankets, which are known as pua, ceremonial outfits and clothing. In contemporary Sarawak the only weaving that gets worn is for ceremonial occasions and Iban blankets are now displayed as wall hangings .The time for weaving is in the evening, after the farming, whilst sitting in the communal village spaces. Weaving is done during the time of storytelling, which adds to its relevance to connecting weaving and storytelling, and home and belonging.

[iii] This poem was part of a larger performance piece, where I used three oversized looms, which created different playing spaces, and provided ‘screens’ to project images on, and were used to weave with, demonstrating the physical work of creating home.

Dr Anna Sulan Masing is a poet, performance-maker, lover of food, comedy and wild dancing. She is interested in exploring space, identity, home, belonging and art around the idea of theatre. Anna has a doctorate in post-colonial feminism and performing arts. Her father is Iban. Anna grew up in Sarawak, New Zealand and in the UK. Find her on Twitter @AnnaSulan