On the 7th of May, British citizens go to the polls. The mainstream media is currently sweltering, overcome by election fever. We are bombarded by the false promises of white, privately educated men. Domestically, change in governance may signal a tiptoe left towards the centre ground or perhaps drag us ever further towards the right. What are the implications for British foreign policy? Does a Labour government differ from a Conservative government in its relations with the nations of Africa and the Middle East? Britain’s postwar history will answer these questions for us. The past informs the future.

The deluded view that Britain’s postwar foreign policy aims were/are to promote democracy, human rights and international development contrasts harshly with available evidence. British foreign policy is obsessed with retention of power and rendering the world economy as subservient to its interests. Perceiving Britain as the eager lapdog of the United States is far too simplistic, our ‘chosen’ leaders have their own specific agendas. Regardless of political allegiance, neocolonialism and imperialism are the orders of the day.

The Islamic State emerged in the bloody aftermath of Tony Blair’s illegal crusade to rid Iraq of imaginary weapons and tyrannical rule. It is now widely understood that New Labour’s joint campaign with George W. Bush was not about freeing the Iraqi people, but freeing Iraqi oil. The privatisation of Iraq’s oil would allow it to flow freely on the world market, to the obvious benefit of British companies. For foreign policy planners, the deaths of approximately half a million Iraqis was a regrettable but necessary consequence in the liberation of fossil fuel. 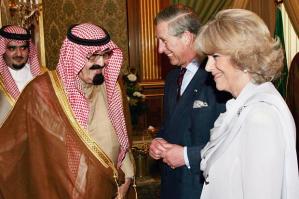 Britain’s longstanding alliance with Saudi Arabia and the other repressive absolute monarchies of the Gulf render any Prime Minister’s concern for democracy and human rights as redundant. These hideous marriages of convenience allow Whitehall to exert influence through its regional policemen, while securing access to oil. The House of Saud has long been purchasing British manufactured arms with black gold. These arms are then unleashed on any forces that threaten British interests and the region’s autocratic rulers. Saudi military, many of whom received training from British instructors, entered Bahrain in March of 2011. The aim of the intervention was to assist Bahraini security forces in suppressing pro-democracy demonstrations. Of course Bahrain’s own protectors of autocracy were equipped with the best of British tear gas, shotguns and sniper rifles.

While David Cameron’s government tacitly backed the crushing of democratic aspirations in Bahrain, Royal Air Force Tornado and Typhoon fighter jets rained hellfire down on Libya, facilitating regime change in Africa’s most prosperous nation. At the time of the NATO intervention to remove Muammar Gaddafi from power, Libya boasted Africa’s highest GDP per capita and life expectancy. Gaddafi believed in the strength of the African Union, wanted to build an African Monetary Fund and develop a common African currency. Libya’s foreign reserves made these ideas feasible, therefore they posed clear threat to British interests. Today Libya is a basket case. Black Libyans have been the target of ethnic cleansing. The town of Tawergha, home to 35,000 black Libyans, has disappeared from the map. Violence between militia groups vying for influence is ceaseless. Islamic fundamentalism has taken root in some areas. The power struggle between two rival central governments could herald the Balkanisation of the state.

While contemporary examples are useful, reaching back into history provides irrefutable evidence that Conservative and Labour foreign policy has an identical impact on the people of Africa and the Middle East. The end of the Second World War accelerated the death throes of Britain’s monstrous empire. In the decades that followed, decolonisation, independence and liberation would become a reality. But like the the tracks of the many-headed Hydra of Greek mythology, the footprints left behind by empire were poisonous.

Clement Atlee’s postwar Labour government initiated social reform, introduced the welfare state and nationalised industry with the noble aim of eradicating poverty in Britain. Atlee appeared to understand that people came before profit. We could logically assume that his government would have been supportive of Iranian Premier Muhammad Mossadegh’s desire to nationalise the Anglo Iranian Oil Company (AIOC). The company’s posted pre-tax profits of £86 million in 1950. An extortionate arrangement ensured that capital flow benefited British imperialism while exploiting Iranian people and resources. Atlee responded to potential nationalisation by declaring an embargo on Iranian oil and planning a military intervention centred on capturing the Abadan refinery. The democratically elected Mossadegh was ultimately removed from power in August of 1953, by a coup orchestrated by Winston Churchill’s Conservative government. Mossadegh challenged British interests, this sealed his fate. A Labour government began plans to overthrow him. An ideologically opposed Conservative government completed the job.

British governments of both hues moved insidiously against African independence throughout the 1960s, siding with the most racist and reactionary forces. Britain’s share of South African foreign investment was huge. South Africa’s gold mining industry was controlled by British concerns and its bullion was the main source of Britain’s gold reserves. In order to protect these interests, Conservative and Labour governments supported South Africa’s white supremacist apartheid regime. Britain abstained from voting on UNSC resolutions condemning the Sharpeville Massacre, ending the trial of Nelson Mandela and other African National Congress (ANC) leaders, and ending South Africa’s mandate over Namibia. Shamefully, Britain opposed sanctions against South Africa and refused to observe a UN arms embargo. The victims at Sharpeville were shot in the back by British weapons. Whitehall continued to back apartheid in the 1980s. Margaret Thatcher, neoliberal ideologue and our most socially destructive prime minister, vehemently opposed sanctions. She dismissed the ANC, a mass movement for black and brown liberation, as a terrorist organisation because it threatened South Africa’s capitalist economy and therefore British companies.

The theme of Conservative and Labour assistance to white supremacy recurs in the histories of Malawi, Zambia and Zimbabwe. Britain invested heavily in the copper industry of Northern Rhodesia (Zambia), guaranteeing the treasury a relentless flow of taxation money. In 1953, Churchill’s government promoted the formation of the Central African Federation (CAF) to frustrate aspirations of black liberation movements, ensuring white settlers controlled the whole region. The wealth of the North was expunged in order to develop Southern Rhodesia (Zimbabwe). Alec Douglas-Home’s Conservative government dissolved the CAF and ordered the transfer of its military might to Southern Rhodesia, vetoing a UN resolution that forbade such a move. Labour Prime Minister Harold Wilson then said he would not consider using force if Ian Smith carried out his threat of a Unilateral Declaration of Independence. In realpolitik this was a green light for Smith’s coup in November of 1965. Wilson huffed and puffed, half heartedly applying sanctions to Smith’s white supremacist regime. The oil embargo was farcical; British Petroleum (formerly the AIOC) and Shell supplied over half of Southern Rhodesia’s oil from 1965 to 1979.

Both Conservative and Labour governments propped up the dying Portuguese empire in Africa. A significant percentage of the Portuguese empire’s foreign investment was British. The symbiotic relationship between the two imperial beasts dates back to the eighteenth century, when the Portuguese nobility payed for British manufactures and textiles with gold pillaged from Brazil. This arrangement allowed for the rapid accumulation of capital that Britain required to industrialise. Arms were sold to Salazar’s fascist dictatorship and deployed against the people of Angola, Guinea-Bissau and Mozambique. Successive British governments provided the Portuguese with full diplomatic cover as they struggled to quell the revolutionary masses.

Do we, as British citizens, have a role to play in frustrating the malevolent interests of our government? How do we support the struggle of African and Middle Eastern nations to sever the ties of neocolonialism and imperialism? We do have a role to play, but it is not one of leadership. It is our duty to educate ourselves, to understand that British foreign policy has never been altruistic in its aims. It is our duty to be vigilant, to challenge our government, be it Labour or Conservative, when the specter of ‘humanitarian’ intervention looms large over the Global South. We must organise. We must be visible, We must be vocal. However, it is the nations of Africa and the Middle East that will liberate themselves. The idea of the white saviour will die. Mutually beneficial allegiances will be formed between peoples of the Global South. Truly independent paths will be carved. Britain will be excluded unless it is prepared to embrace equitable relations. The BRICS has made the dream of a multi-polar world a reality again. The $200 billion New Development Bank, created by the BRICS nations will provide an alternative to the dominance of western lending institutions. The world economy will no longer be subservient to British interests. British foreign policy will have no choice but to change.

What does the future hold in regard to British foreign policy towards the nations of Africa and the Middle East? Will a Labour victory in the general election signal change? Will democracy, human rights and international development become genuine objectives? Will black and brown lives be truly valued? History says no. The longstanding relationship with Saudi Arabia and the Gulf states tell us that British foreign policy doesn’t give a damn about democracy. The examples of Iran and Congo demonstrate that if international development threatens British interests, it will be crushed. Support for fascism and white supremacy in South Africa, Zimbabwe, Angola, Guinea-Bissau and Mozambique suggest that neither party truly values black and brown lives. The destruction of Iraq and Libya inform us that neocolonialism and imperialism dictates violence on an unfathomable scale. Devil in a blue tie. Devil in a red tie.

Robert Kazandjian is an educator and writer. He works with vulnerable children in North London. His writing seeks to challenge inequality, in all its guises. He has previously written for Ceasefire Magazine on racism in Israel, gender politics and hip hop music, and the necessity of Armenian Genocide recognition. He blogs poetry at makemymark.tumblr.com. He cites Douglas Dunn, Pablo Neruda, James Baldwin and Nas as major influences. He tweets from @RKazandjian

Articles published in the other politics series so far: