In the 1970s, African-American (now Afro-Canadian) writer Charles Saunders began publishing short fantasy stories in small magazine presses. From the beginning, his stories pulled on African history, as opposed to, as he put it, “the usual Celtic, Arthurian and Scandinavian underpinnings” that dominated (and continue to dominate) the modern fantasy shelves of bookstores. “I saw a need,” Saunders claimed, “and believed I could fulfill it.” This would lead to the now famous and groundbreaking Imaro saga. Set in a pre-colonial African-based world of spears, monsters and magic called Nyumbani, Imaro tells the tale of an outcast warrior and his larger-than-life quest for his unknown origins.

Saunders, who had grown up reading the likes of Edward Rice Burroughs Tarzan novels and Robert E. Howard’s Conan, struck upon the idea of writing fantasy during the heady political days of the 1960s–in part due to the heightened race consciousness about identity and Africa, which he credits to a good 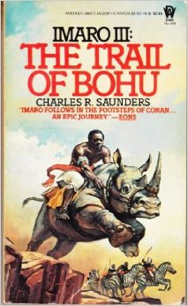 number of African students at his predominantly black college: “I started reading more about the history and culture of Africa. And I began to realise that in the SF and fantasy genre, blacks were, with only few exceptions, either left out or depicted in racist and stereotypic ways. I had a choice: I could either stop reading SF and fantasy, or try to do something about my dissatisfaction with it by writing my own stories and trying to get them published. I chose the latter course.”

Saunders had decided he would tell the story of these “others” from their own perspective. He would make their land, customs and people the norm rather than the exotic. Fantasy had gone postcolonial.

In 2012 a roundtable at the World SF blog focusing on non-Western cultures in speculative fiction asked the following question: What are the problematics of some Western writers tackling non-Western settings for their novels, and do they result in exoticism?

One of the panelists, SFF author Joyce Chng (Singapore), spoke on these issues of “othering” and the Western gaze:

This is about the part where someone asks, “So are you saying that Westerners and whites can’t or shouldn’t write about non-Western/non-white cultures or people in fantasy?” And the answer is one big eye rolling, of course not. Don’t be dense. Writers and creators should explore the full breadth of human diversity in fantasy, if simply to break the Eurocentric norm. Does this come with risks? Yes. You may go out and create more diversity in your fantasy with the best of intentions, and find yourself being criticized for such things as “othering.” Yeah. Thems the breaks. About to throw up your hands and declare, “Damned if you do, damned if you don’t?” Don’t give up so easy. If Frodo could get that ring all the way through Mordor, you can survive this.

Making your fantasy world more diverse doesn’t have to mean adding in PoC and distant cultures as monstrous “baddies.” They don’t have to be noble savages, become hyper-sexualized or fulfill all your exotic fantasies. They don’t have to have white heroes or heroines give us a Marco Polo type travel narrative, or play the part of civilizer and savior. Writers like Saladin Ahmed, Cindy Pon and the afore-mentioned Joyce Chng show that non-Western worlds can be fantastic, magical and unique, without resorting to common exoticizing tropes. Others like David Anthony Durham and NK Jemisin have given us wholly new fantastic worlds rich in diversity.

That all these writers are also persons of color certainly helps, but that shouldn’t limit anyone–of any background–from trying to do better. I do not subscribe to the school of thought that it is solely up to PoC to write diverse stories. It’s certainly relevant that we “write our own stories,” yes. (Note to Michelle Rodriquez, we been doing just that for a minute—get a late pass.) But I should be able to write stories that aren’t about my particular ethnic-racial background. And so should everyone else. That argument in my opinion is a cop-out that conveniently leaves PoC holding the responsibility bag. It lets white-dominated speculative fiction in the mainstream continue on doing what they do–while PoC are relegated to smaller enclaves that get little to no popular visibility. We’re all responsible for creating not only more diverse world, but also ones that challenge our past (and modern) stereotypical tropes.

For what it’s worth, some pointers:

(1) Read the greats like Tolkien, Miller, GRRM and other traditional Eurocentric writers. Watch Game of Thrones. Count the stereotypes, “othering” and moments of wince-worthy racialization. Catalog and study them. When you see your writing drifting in that direction, change course.

(2) Read the guys who seem to get it right. Read fantasy works by PoC and non-Westerners, set in non-Western cultures. Notice the distinction between depicting varied cultures and people as different versus exotic. It’s tricky, takes some serious research, but eventually you begin to see it.

(3) Can you stand by your creation? No one here is about censorship. If you feel you really need to make one of your characters in the mold of the noble savage, go right ahead. But ask yourself if your reasons are really valid for your storyline, or if you’re just falling back on an easy stereotype. And when the criticism comes down, don’t act all brand new. You knew what you were doing. Own up to it and deal. If you can handle that without filling up my white tears mug, go ahead. If you can’t though, then do better.

(4) Spend a brief bit of time brushing up on some postcolonial theory, or at least a bit of critical race theory. Sometimes simply “not knowing” is a big reason for some well-meaning blunders. But in this information age, ignorance makes for a poor excuse. SFF author and scholar Jaymee Goh’s Rules Before Engaging is a great start.

(5) Being a PoC doesn’t grant an automatic pass. Because this isn’t about “good or bad people,” it’s about a structural system that affects all of us. Many of these “othering” notions are transnational and no respecters of borders or backgrounds. I’ve read fantasy by PoC that skirts the line, or goes trudging headlong into exoticism, “othering” and other disturbing tropes—because it’s what was learned. Be self-aware.

(6) Beyond issues of race and ethnicity, there are ways of mishandling or stereotyping numerous types of differences, not limited to gender, sexuality, religion, disabilities, etc. It wouldn’t hurt to examine when and where you’re going down the stereotype hole in addressing any of these. A great primer is Nisi Shawl’s and Cynthia Ward’s, Writing the Other: A Practical Approach.

(7) Even if you try your best, you might still “Do It Wrong.” Sorry. Life ain’t fair. You can minimize your risk of doing it wrong by thinking about what you’re doing–or as a friend of mine likes to say, just deciding to give a f–. This might mean you look for friends, beta readers and writer’s groups with some diversity. Others might pick up on troubling things you may have missed. But criticism may still fly your way, warranted or not. Don’t get defensive. Remember, people are placing whatever you wrote into a much larger historical context. It’s bigger than you. See it as a teaching moment, and next time just strive to do better. The decent act of actually “giving a f– ” will inevitably earn you some praise.

In the meantime, there’s no escaping the “othering” fetish that permeates mainstream popular fantasy. All the new literary creations in the world aren’t going to make veiled Haradrim or Daenerys body surfing crowd of slaves go away–not any time soon. They’re not likely to stop a few more sequels to 300. All the rest of us can do is make certain to point out, address and deconstruct these troubling tropes when we see them. And strive to create countering visions.