“Britain has lived its long life as an exemplary country, the small island with a massive impact”.

Less than twenty-four hours after David Cameron made this empire-esque declaration at the Conservative’s manifesto launch, the latest reality of Britain’s brutal impact on the world appeared in newspapers. 400 migrants were reported to have drowned yesterday in the Mediterranean Sea; just months after Britain withdrew support for rescue operations. The Government, then, have chosen to leave migrants to die in the Mediterranean – is this what they mean when they talk about ‘British values’? Apparently so.

These people – the term to describe them is ‘migrants’, which in British politics has become a somewhat dehumanising word – were women, men and children attempting to leave countries in North Africa and make it to European shores. Some are thought to have fled civil war in Libya, while others may have been trying to escape persecution or severe poverty in their country of origin. To the Conservatives these are trifling points, easily buried underneath news of yet another manifesto launch or the impending birth of a royal baby.

Cameron and co. are all too happy to let this pass by without comment because in October last year the government announced that they would no longer support any search and rescue operations for migrants and refugees drowning in the Mediterranean. In doing so, they joined the Italian government who have scaled back their rescue operation (named Mare Nostrum) and left a “more limited EU border security operation”, known as Triton, to take sole responsibility for such catastrophes. Exactly what Triton consists of is unclear but it doesn’t seem to include search and rescue, only border protection and patrols within 30 miles of the Italian coast. 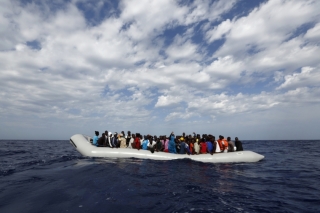 The British government’s justification for dropping support for drowning migrants was that it would discourage people from making this journey. Pro-immigrant campaigners, human rights groups and the Labour party disagreed – unfortunately the death toll this year proves that they were right to do so. Two months ago 300 people drowned attempting to make the crossing.

Neither tragedy this year was an anomaly. The International Organization for Migration (IOM) estimates that up to 3,072 migrants died in the Mediterranean in 2014, that’s compared with an estimate of 700 in 2013. When you look at the bigger picture, the numbers of people who have died is huge: the IOM thinks that since 2000 more than 22,000 migrants have drowned trying to get to Europe. These figures show just how wrong the government were: they should have increased support for rescue missions, not scrapped it altogether.

‘Questions of cause, responsibility and victimhood often focus on two main victims: the dead would-be migrants, and the “receiving” country. This not only assigns victimhood and denies agency to transnational migrants, but also ignores European (and specifically EU) policies that have severely limited migration from countries that they have historically played a role in under-developing.’ Sara Salem Framing Transnational Migration: An Intervention

Meanwhile they don’t seem to have any qualms with measures that keep people within war-torn Libya. The EU are helping the Libyan authorities to strengthen their borders, effectively trapping people in the middle of a deadly civil war that was made worse by the NATO intervention in 2011.

This morally reprehensible state of affairs all comes down to a lack of concern for migrants. After a cursory expression of remorse, it’s relatively easy for politicians to brush aside news of people needlessly dying in the Mediterranean because, as I’ve written in the past, the lives of people of colour are of little importance to them (and most of these migrants are of colour). Especially when they’re from countries outside of the EU.

That’s why, without allowing them go anywhere near the warped white saviour narrative, we must push the next government to recommit to support for search and rescue missions. Otherwise, the numbers of people dying in the Mediterranean will simply continue to rise.

Articles published in The Other Political series:

“Lessons from Scotland: Offer People a Vision”: Interview with Sofi Taylor
Lester Holloway: Political Parties Favour Asian Over Black Candidates
Dr Youssef El-Gingihy: THE NHS ELECTION
Kiri Kankhwende: Introduction: Small Politics
Omayma El Ella: The Suffocation of British Muslim Civil Society Space
Shane Thomas: You can’t move for all the ‘tolerance’ in Britain
Faisa Abdi and Hamdi Issa: Politicians Must Acknowledge the Link Between Negative Media Stereotyping of the Somali Community
Pragna Patel: The Elections 2015: Desperately Seeking Equality and Justice
Maya Goodfellow: Climate change is easier to ignore because right now it’s people of colour who suffer the most
Anouchka Burton: The pink bus is a start but parties need to show women they’re in for the long haul
Colin Joseph: BME communities should get on the bus & vote at this year’s Election
Huma Munshi: From a survivor to the new government: Every woman matters
“It’s an exciting time to be a politician”: Interview with Reema Patel (Labour Councillor)
The Conservative Party is a broad church” Interview with Walaa Idris (Conservative campaigner)
“We can’t allow the scapegoating of migrants in the political arena to go on.”: Interview with Benali Hamdache (Green Party member)