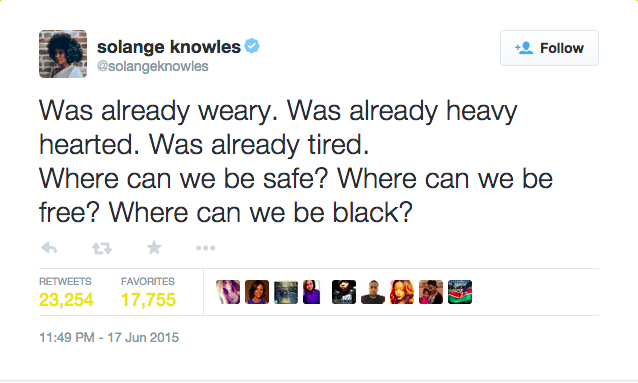 Dylann Roof’s bloody slaughter of nine Black church attendees should not be called a “hate crime”. To sit in a church for an hour before opening fire on its constituents because they simply exist is a calculated act of awesome terror. But this was not any church; it took place in Emanuel African Methodist Episcopal Church, the site of the first independent Black denomination in the US. One of its founders, Denmark Vesey, a former enslaved Black man, was executed for planning what would have been America’s largest slave revolt. The symbolism of killing Clementa Pinckney, the current Church leader and youngest ever elected African-American South Carolina State Senator, is stark.

When the authorities called this evil event a “hate crime”, it was a relegation, a reduction of the significance of the horror. Many have compared the response to this incident to the response to the Boston Bombings and Charlie Hebdo murders. They were undoubtedly interpreted as the work of terrorists. Men motivated by a political ideology and grievance. There were vigils across the world and communities across each country took moments of silence to remember the lives taken and many more affected. There were international gestures of solidarity; it was recognised as an attack of all US/French citizens, an attack on Liberty itself.

It appears that Liberty, in the face of mass Black death, remains undisturbed. Dylann Roof has not been cast an existential threat to America; the manhunt for him was not accompanied with a lockdown. There has not been international condemnation; the white community have not been urged to find out what it is about their community that drives their young people towards these despicable acts. Whilst terrorism is often deployed by elites to make political land-grabs, in this horrific instance both in terms of scale and spectacle, the label fits. This was born out of political ambition rather than interpersonal hatred.

The use of “hate crime” here is as absurd as it is instructive. Political authorities and their acolytes in the media tell us: white people do not do “terrorism”, white people do not coordinate terror among its marginalised populations. If white people massacre Black and Brown people, it is an isolated incident, it is a “hate crime”, something born out of an anachronistic irrationality. We watch how the perpetrator is quickly psychoanalysed by the media and other unqualified pundits to be suffering a “mental illness”. Terrorism and coordinated ideological violence is something only Black or Brown people do.

If Dylann Roof was acknowledged as a terrorist then so would the history of the United States, along with European colonialism in the Americas, Asia and Africa. Not only their past but much of its present too. The history of US lynchings orchestrated by local white families and communities is a history of white terror. The coordinated assassinations of political leaders from Patrice Lumumba to Salvador Allende is the history of white terror. The daily murder of unarmed Black people in United States by police officers in 2015 is white terror. This is Dylann Roof’s ideology, demonstrated by his affiliation with Apartheid South Africa and Colonial Rhodesia.

Much of Africa today is trapped in hyper-exploitation by European countries and their corporations working in tandem with tin-pot dictators. It is powerful American and British companies like Apple, Shell, Barclays and Lonmin who fund and perpetuate corrupt and powerful leaders in order to keep essential raw materials like coltan, oil, aluminium and more flowing to Western shores.

From Charleston to Marikana, Black lives hardly matter when they are wealthy and certainly do not when they are poor. To make all Black Lives Matter, people of African descent racialised as Black have made significant progress but there is still a long struggle ahead.

—
This is part of the new Black Friday series on ALL BLACK EVERYTHING section of Media Diversified. We will be publishing articles from a range of activists, poets, artists and writers which will culminate in a real-life discussion and meet-up in London in August. If you want to get involved email mediadiversityuk@gmail.com with the subject: ALL BLACK EVERYTHING