This week sees Australia participating in the Eurovision Song Contest again after last year’s first official entry. Fans of the event may remember our appearance in the competition the year before, making it three in a row, which might seem more than slightly strange for a country 14,000 kilometres away from Europe. It is not an official requirement for representing countries to be geographically located in the region, but it has been a long-standing convention that only members of the European Broadcasting Union are included. 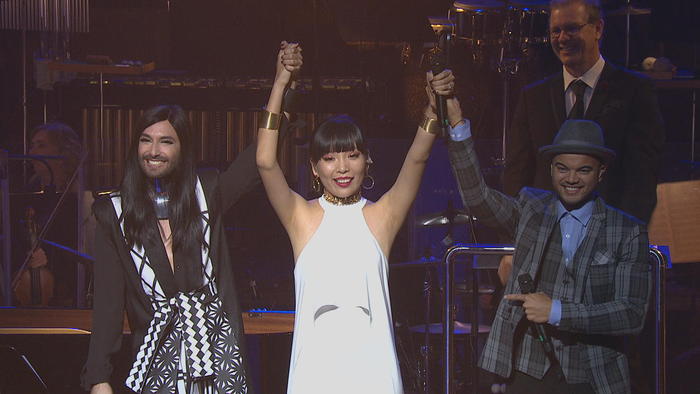 Australia is obviously not a formal associate of that Union based oceans away, but for many years we have watched, with great passion, the Eurovision telecast in large numbers. Some are emotionally invested in countries with which they identify or maintain strong connections, and others simply enjoy being caught up in the wonderful extravagance of it all. When news came early last year that we would finally be able to see ourselves in competition on the Eurovision stage, enthusiasts were clearly overjoyed, just as any devotee would feel when their avidity is rewarded by the object of desire.

With this year’s presence, however, it appears that our role is no longer merely a novelty. The anomaly seems to be on its way to becoming a new tradition, and we have to read between the lines or, perhaps more accurately, to recognise the glaring reality that the world does not think it such a stretch to consider Australia an offshoot of Europe, physically distanced but similar in spirit. Unlike the Americas and New Zealand, we are a Western society that has sentimental links so strong that we let ourselves forget who we actually are, and this stubborn longing for the motherland is reflective of Australia’s struggles with multiculturalism, and its inability to come to terms with its Aboriginal roots.

Our refusal to cut ties with the English monarchs reveals a fear of independence. It is as though sovereignty would necessitate separation from our European histories, and hence the nation must finally acquiesce in its own Indigenous truths. Centuries of exploitation and harrowing injustices toward our first peoples need desperate reparations that our dominant culture is unwilling to provide. This perpetuation of the original Australian sin from the very first day of invasion cannot be divorced from the persistent way we align ourselves with Europe, and our part in Eurovision is but one of the many symbolic gestures that tells of the social divide that we insist on maintaining, leaving little doubt as to whose side we are on. Our respect for this land and its inhabitants will never be, until we cease the plundering that had begun over two centuries ago.

On a brighter note, it is noteworthy that all three Australians who have thus far been chosen to perform on the Eurovision stage are all prominent people of colour. Our first representative was Jessica Mauboy, of Aboriginal and Indonesian background, and last year’s Guy Sebastian has roots in Malaysia and Sri Lanka. This year, we are sending Korean-Australian Dami Im to Sweden in our bid for musical glory. All of them shot to fame through exposure in various high-profile television talent shows, and all have had multiple chart successes with their music releases, including Im’s “Classic Carpenters”, currently sitting at the top of the Australian Albums Chart.

We have had Eurovision on our Aussie television sets since 1983, courtesy of Special Broadcasting Service, a public broadcaster established with the intention “to provide multilingual and multicultural radio and television services that inform, educate and entertain all Australians and, in doing so, reflect Australia’s multicultural society.” It therefore comes as no surprise that the faces we have presented to the world at the song contest have been consciously and sensitively selected to be inclusive of our ethnic diversity.

Almost too predictably, reports have surfaced in mainstream media such as the Daily Mail and the Guardian about backlashes, with racial dimensions of these reactions barely contained. An online petition emerged early this year when it became known that we are to compete again, demanding that Caucasian singer Shannon Noll be engaged for the occasion — “Can you honestly think of one man that embodies the Australian ideals of persistence and mateship more than Shannon Noll?” — accompanied by a collaged image of Vegemite, Ayers Rock, a koala and Noll himself proudly displaying a Southern Cross tattoo. The “Australian ideal” might mean different things to each individual, but it is clear that the great white man is still held up as a standard by some.

As with most developed nations around the world, Australia has to come to terms with the changing complexion of its inhabitants. It has been centuries since we were all black, and to the chagrin of many, we certainly have never been all white. As our lives continue their increased obsession with screens and devices, the faces that appear in our vision and the races they represent must become completely inclusive. Not all of us have to appreciate Australia’s part in Eurovision, but we should celebrate the fact that what we are showing the world is a new and more accurate image of our identity and should — with a little bit of cultural subversion — transform the way we think about ourselves so that every person who lives here may feel what it is like to be accepted at home.

is an Australian transwoman of colour. She is Sydney’s most prolific theatre reviewer, publishing independently at suzygoessee.com
A Hit of Culture with Suzy Wrong is our regular column keeping you up to date and well informed about Australia’s arts, media and culture scene.