With Rio 2016 less than a week away, a handful of the writers you’ll be reading – and hopefully enjoying – over the next month give us their view on what and who they will be looking forward to seeing at the Olympics and Paralympics:

Shane Thomas writes the ‘Two Weeks Notice’ column at Media Diversified and is one half of The Greatest Events in Sporting History podcast. Twitter: @tokenbg

There are two things that peak my interest at any Olympics and Paralympics. The first is the way hitherto unknown athletes burst onto the sporting consciousness. Four years ago, who had heard of Gabby Douglas, Laura Trott, Katie Ledecky, Anthony Joshua, or Nicola Adams? So it’s difficult to say who I’m looking forward to seeing this time around, as I probably don’t even know their names yet.

The other compelling aspect of the Games is the athlete who has to deal with the privilege (or is that burden?) of being the host nation’s best chance of a gold medal. There will be pressure on Arthur Zanetti, Sarah Menezes, the men’s football team, and the romantic in me would dearly love to see the legendary Marta finally claim the global title that’s eluded her in the women’s football.

But the potential home star is more likely to come in the Paralympics. Alan Oliveira made the world take notice four years ago, getting a shock win over Oscar Pistorius in the T44 200 metres. With Pistorius now disgraced and in prison, Oliveira will have to carry the expectation not only of his countrypeople, but also of the entire Paralympics. Global sporting events are always boosted by home success, and a strong showing by Oliveira could help contribute to disabled athletes being taken more seriously, and their achievements fully respected. There’s no-one I’ll be rooting for more over the next couple of months than Oliveira.

Christienna Fryar is a professor, historian, and pop culture junkie. She is from Virginia, lives in Buffalo, NY, and calls Durham, NC and London home. Twitter: @jamaicandale

Will this be the year that prompts serious re-evaluation of the Olympics? I am as diehard and unrepentant a fan of the Olympics as anyone, but the price increasingly feels too high, especially this time around. Many have already pointed to the parallels between 2016 and 1968, but few have mentioned the Tlatelolco massacre of students ten days before the Mexico City Olympics; a reminder of the lengths governments in turmoil may go to ensure that the Games go smoothly. And London’s surface-to-air missiles remind us that ramping up force is not solely reserved for the developing world.

As the bidding processes for the next several Olympics and World Cups suggest, we’re trending toward authoritarian states as the only nations that see value in hosting these competitions. Is there a way to have the Olympics without the attendant human costs, and if not, will a point come when viewers will no longer accept human rights violations as the trade-off for entertainment?

On the sporting side, I look forward to watching the sprinting elders compete for more – and for some, final – glory in the pool and on the track. Both the highest profile (Usain Bolt, of course) and the woefully underappreciated (Nathan Adrian, Anthony Ervin, Shelly-Ann Fraser-Pryce). And maybe this will be the year Jamaica finally medals in the pool?

Felipe Araujo is a freelance news journalist based in London. He spent five years at CNN International and covered the 2014 World Cup in Brazil for Germany’s public broadcaster ZDF. He writes about race and minority issues, sports and culture. Twitter: @felipethejourno

As a huge basketball fan, I’m really looking forward to getting a glimpse of the USA team, even though some of their top players won’t be present. Witnessing Usain Bolt try and shatter another record in the 100m final at the Olympic Stadium would be pretty special, too.

But as a Brazilian journalist, I’m also keen to report on how the city has changed since the 2014 World Cup, and talking first-hand to those most affected – for better or worse – by the Games. There are already a few street demonstrations planned across the city, so it should be an eventful three weeks both in and away from the Olympic arenas.

Eleanor Lisney is a founder member and coordinator of Sisters of Frida. She is an access advisor, an NUJ member on the New Media Industrial Council and the Equality Council. She is also on the British Council Disability Advisory Panel and the web team of the International Network of Women with Disabilities.  Twitter: @e_lisney

I have never been into any kind of sports – not as a participant or as a spectator. As a disabled girl, growing up I found out I couldn’t even throw a ball or do any P.E., and so I gave up any potential interest. And as Malaysia is such a hot and humid country, you would not want to be outdoors unless you had good reason.

But in 2012, I was one of the Olympic torchbearers in Coventry, and so felt that I had to take an interest in the Games. I went to a few events and really enjoyed enjoy the Paralympics fencing. The wheelchairs are locked to the ground during the competition, and it helped that I had a clear view of the fencers, allowing me to see their moves, with China dominating the event. I was fascinated by the skills of the fencers, with the best of the lot being Yijun Chen. It’s he who I’m most looking forward to watching on my television at this year’s Paralympics. 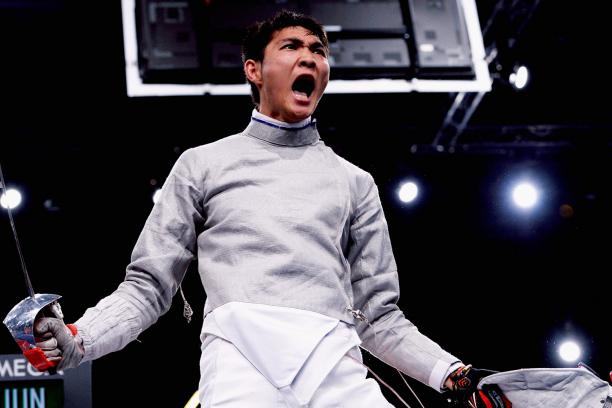 Shireen Ahmed is a writer, public speaker and Sports Activist focusing on Muslim women in Sports. She is an athlete, advocate, community organizer, and works with Youth of Colour on empowerment projects and is an avid sports coach and mentor. Twitter: @_shireenahmed_

I am most looking forward to seeing how mainstream sports media (90% white, cisgendered men) write about Muslim women athletes, and wondering how their stories are written and what kind of Orientalist gazes will be used to present these stories. The MSM has a sordid history of representation, particularly with regards to non-white, “foreign” women.

I am also looking forward to seeing if athletes speak out about issues of social justice in regards to the country they are representing, or in a wider global context.

And not going to lie, also really looking forward to the women’s football.