The last time my partner and I went to the cinema it was to see Dope. We have a projector at home and flick between Netflix and torrents, so we’re happy to forego the cost of a sitter and enjoy our home cinema instead of going out. But we loved the trailer and love supporting Black indie films. We relished the opportunity of seeing this unique representation of black youth and black culture on the silver screen. 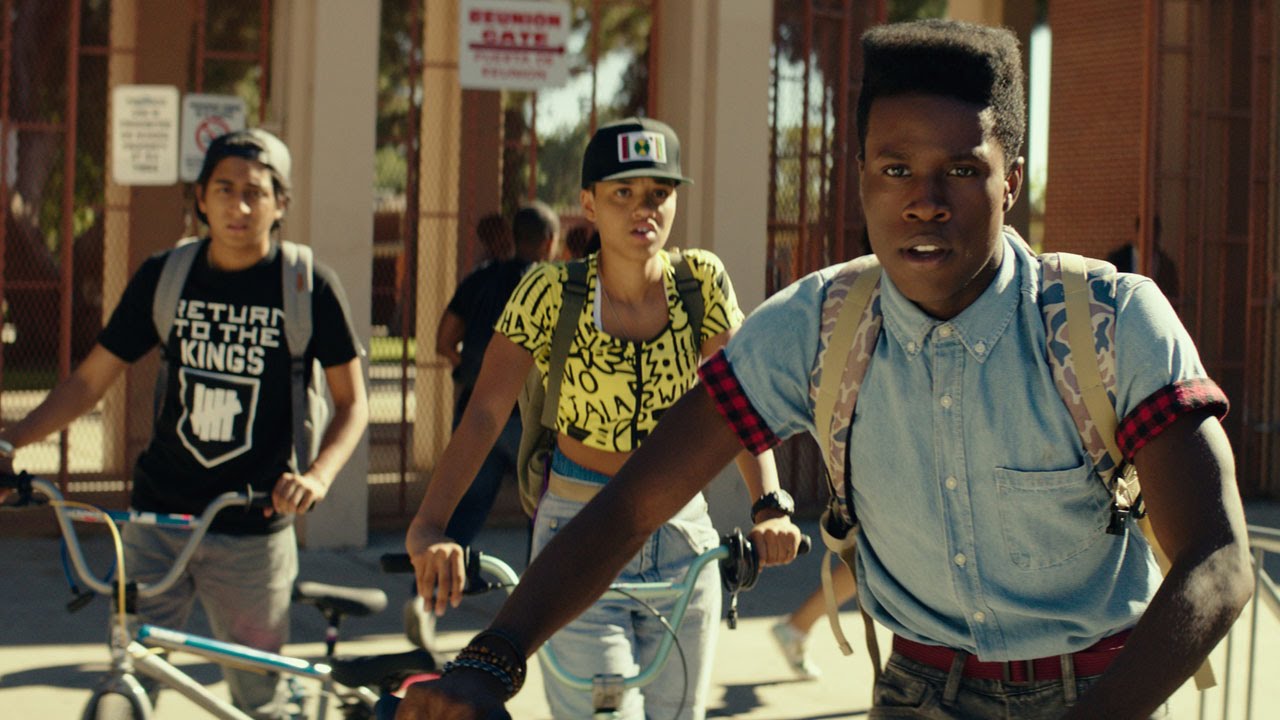 Dope did not disappoint.  I loved everything about it. Most of the jokes and cultural references went completely over the heads of the mostly white Dutch audience we were viewing with. Living in a city as white as Amsterdam, I live for the rare moments when black art is clearly speaking directly to black people without regard to the white gaze. The movie was for us and by us and I really felt that. The soundtrack was dope and I love how the story was so in the spirit of black movies of the 90s whilst still being its own thing.

Watching Dope, I couldn’t help but think about the movie Belly. Released in 1998, Belly was slept on during it’s time – it was a critical flop but it’s become a cult classic. The movie follows Tommy Bunds, played by Earl “DMX” Simmons. Tommy embodies the heterosexual black (American) masculine ideal. From the moment we see him we know he’s the man – the growl and aggression in his voice when he speaks, his hood uniform (oversized white tees, big chains, baggy jeans), the way he smokes his blunts and the way he relates to the people in his world, all of these signifiers identify him as the reigning archetype of black masculinity in the late 90s.

In one particularly testosterone filled scene, a group of presumable gangsters are in a basement, drinking, smoking weed and counting drug money. (Like we’re all doing on a Tuesday night, right?) Tommy gets angry at one of his boys, Jay Black, and pulls out his gun. But instead of shooting Black, he fires shots around him and forces him to strip naked in front of everyone. This kind of humiliation gets to the heart of how masculinity can be weaponised by one and swiftly and thoroughly stripped from another. The assault undermines Black’s masculinity while elevating Tommy’s.

In another instructive scene, Tommy is sat at a table with Wise and LaKid – two “young thugs in training”. At this point in the movie Tommy’s reign as drug lord has come to an end, he’s morose and drunk. Wise and LaKid are describing a confrontation that went down, each dissing the other for being a punk, “See how shook you was when them niggas showed up, you was ready to cry like a bitch.” What’s fascinating is that as they talk, they are both performing Tommy. They lean back in their chair, they gesticulate with their hands, the base in their voice deepens and they even change the rhythm of their speech to sound more like Tommy. The tension mounts as they blow shot after verbal shot at each others egos in an attempt to outperform each other. If you’re thinking this could only end badly, you’re right. Wise puts his gun on the table. LaKid follows suit. They stare each other down, both reluctant but willing to take the others life to fulfil the final act of this performance. LaKid picks up his gun first and fatally shoots his friend in the chest.

The hood movies of the 90s focused on the very real struggles of black lives, and black male lives in particular. Characters like Tre in Boyz n the Hood and Pookie in New Jack City grappled with the devastating impact that the influx of drugs and guns had on low income black communities in American cities. In these movies, being black was about struggle, strife and pain. The street code was either kill or be killed, steal or don’t eat, sell drugs or take drugs. The possibilities for how black boys and men could exist in the world were severely restricted by the dire circumstances of life in the hood.

You might wonder why a movie like Dope would have me reminiscing about Belly, Boyz n the Hood or New Jack. Almost 20 years later, Dope follows Malcolm (played by Shameik Moore) – a skinny, nerdy high school kid from the hood who might have been an extra in the hood films of the 90s. While Malcolm’s brand of black masculinity might appear to be leaps and bounds from that performed by Tommy, Malcolm is because Nino Brown, Doughboy and Tommy were. The evolution of black masculinity is embodied by Malcolm.

Malcolm is a quirky and carefree black boy. He’s good at math and he proudly rocks an outdated haircut. Compared to the aggressive vitality of his “fore-brothers”, Malcolm is insecure and awkward. Where Tommy exclaims, “Get money, fuck a book!”, Malcolm aspires to attend Harvard. Although Malcolm is coming of age in a hood just minutes from where Tre and Doughboy in Boyz n the Hood came up – Inglewood, CA – the same unsavory elements that plagued those guys does not define nor defeat Malcolm.

What’s interesting about Dope is that while Malcolm does not fit the stereotypical gangsta image of the characters before him, his brand of blackness is respected by those who do. Don, played by A$AP Rocky, fulfils that traditional gangster archetype. He drives a nice car, wears a gold chain and is prone to unpredictable fits of violence. Don teases Malcolm, but he respects his intelligence and his appreciation of 90s hip hop. He respects him enough to invite him to his birthday party and beats up the security guard that tries to keep Malcolm and his friends out of the party. It’s unlikely that this could’ve happened in a 90s movie where nerdy black boys were invisible unless they were being beaten up. In Dope, the focus of the camera pivots from Don to Malcolm, centering quirky, nerdy carefree blackness instead. Though Malcolm glorifies 90s music, he does not aspire to perform the masculinity that was idolised in that time. Malcolm wins by being clever and charming and not through violence, misogyny or martyrdom – something black youth on the silver screen are not normally afforded.

The juxtaposition of these films and their lead male characters offers ripe material for examining the evolution of the performance of black masculinity in this genre. Who knows, maybe in another 20 years we’ll have a woman (or even a queer woman!) as the lead character of a hood film.

Originally from Brooklyn, Marly Pierre-Lewis is a writer currently living and loving in Amsterdam with her family of 3. For the last 3 years, she’s been working in tech where she attempts to write persuasive copy that converts for an e-commerce company. When she’s not doing that, she’s schooling her 5 year-old son on menstruation and consent, running workshops on intersectional feminism and writing on parenting, race and sexuality. She’s also the co-founder of the Amsterdam Black Women, a meet-up group for black women expats living in Amsterdam. She tweets as @MarlyOnella

The Black Star series of articles coincides with BFI’s Black Star film series. Over ten weeks, we will bring you articles which explore the films in the series, the issues they highlight and the stars who have played such an important role in the history of film. Curated by Grace Barber-Plentie.