Ganja Meda has a problem, or more accurately two: the sole female lead of the sultry, kaleidoscopic Ganja & Hess is walloping against the whims of two troubled men, one a creative and the other a wealthy intellectual, each exhibiting the most loathsome qualities typically attributed to his archetype. As it turns out, she’s exactly the woman for the job. 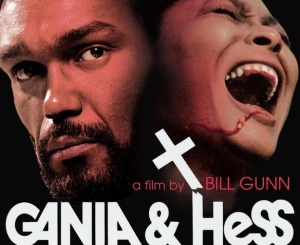 Hotheaded Ganja, played by the beguiling Marlene Clark, is the estranged wife of George Meda, a nihilistic artist who himself is the assistant to well-to-do anthropologist Dr. Hess Green (Duane Jones of Night of the Living Dead fame). Relations between the three quickly progress from peculiar to tornadic in this mesmerizing 1973 vampire horror curio. As new bonds are forged and power structures are upended, the transformative journey endured by Ganja’s character proposes a reimagining of the social and spatial limits imposed on Black women and the Black female body.

Writer and director Bill Gunn is the mastermind behind Ganja & Hess. As the story goes, Gunn was commissioned by Kelly-Jordan Enterprises to make a Blaxploitation vampire movie following the box office success of Blacula (1972).
Gunn (who himself plays the character of George Meda) wasn’t keen on this vision and instead crafted something much more inventive, a smart and expansive piece of work with experimental sensibilities that emblematically used vampirism to represent addiction. In the film, the unstable Meda stabs Hess with an ancient African dagger before killing himself, infecting the anthropologist with a disease that leaves him immortal and insatiably thirsty for blood. Soon after, a torrid affair develops between the two titular characters wherein Hess turns his new lover into a vampire as well, setting the stage for a sensual fever dream of a film that explores sexuality, social pathology, and power. 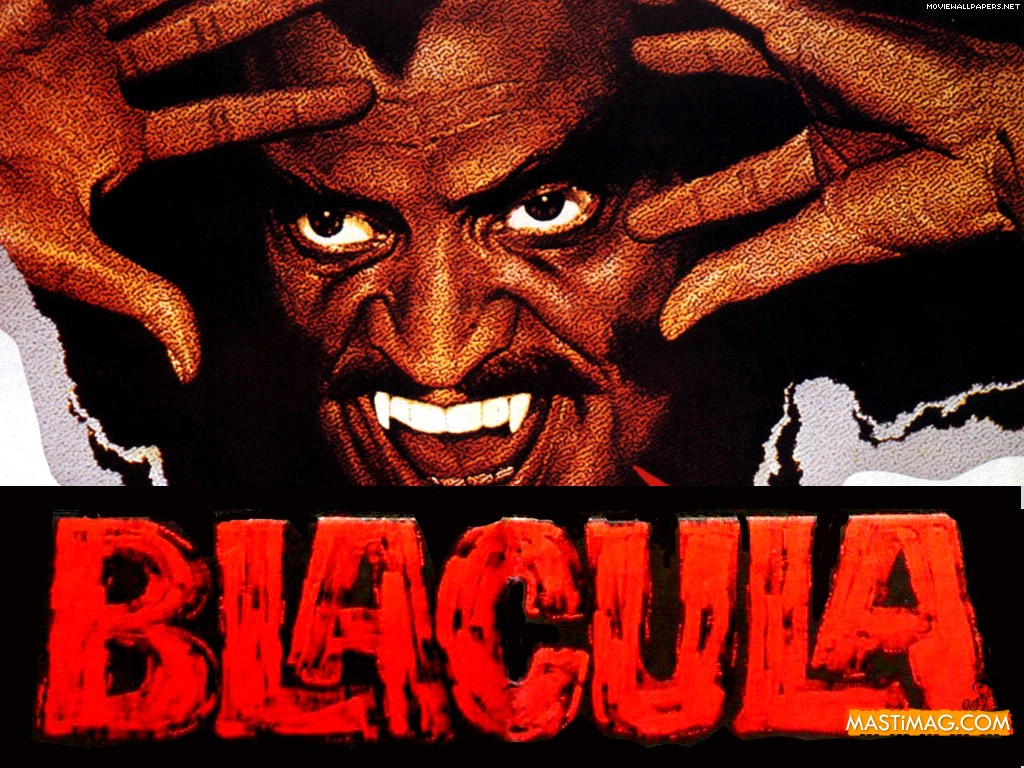 From the moment Ganja arrives at the residence of Dr. Green in search of her husband to settle some business, the heroine is explosive. Brazen and obtuse, she postures aggressively and shamelessly mistakes the estate’s patriarch for the help. The vixen’s brashness clangs against the pleasant artifice of Hess’ world, and all initial attempts to contain her are futile; time and time again, she disturbs the order of the estate and banters with Hess in competitive volley.

Manthia Diawara and Phyllis Klotman write at length about the narrative authority afforded to each character in the film: Ganja enters the story with guns blazing, but we’re not sympathetic to her point of view, or even particularly receptive to it beyond the entertainment value of her conduct. 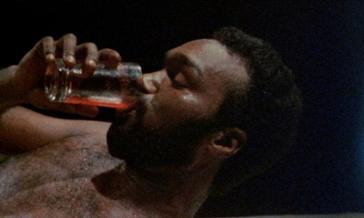 Her crass disregard for the bourgeois stylings of Hess’ life seems unbecoming especially in contrast with the civility of Hess’ driver, a part-time minister and the film’s traditional, most prominent narrator. In proximity to the righteousness of the minister, we can’t help but see Ganja’s immorality, a deviance to which we can’t warm ourselves. Where a narrative of victimhood reigns supreme – in the volatile Meda who is vulnerable to his self-destructive impulses, and in Hess whose vampirism is the result of a vicious attack by his own assistant – Ganja’s scorching, fearless disposition paints her the ultimate antagoniser.

As the strong presence of the Black church might suggest, the film locates itself squarely in the milieu of Black American culture. The church serves as a moral compass, and the minister its virtuous icon through whose gaze we see the most reliable recounting of events. Meda’s preoccupation with the struggle of thriving in a race-obsessed America reflects the acute sense of imposed racialization present in the Black American consciousness. The choice to reflect on Blackness through resistance of white narrative space and the reproduction of existing Black cultural anxieties, norms, and hierarchies is a signature one: in pairing this thematic realism with heavy topical and visual expressionism, Gunn conjures up a gorgeously complex and enigmatic filmic world.

That Ganja is a Black American woman inhabiting a Black female body is perhaps a less cerebral but more salient cultural dimension. The female body, and especially the Black one, has long been the target of exploitation and eroticization, and a site of pain as such. As critic Marlo D. David puts succinctly, “regimes of power have historically flourished via representation of racialized sexualities;” from the hypersexualization and public display of the body of Saartjie Baartman in 19th century Europe, to the use of the Black female body in the era of American slavery to perform manual labour, provide sexual satisfaction, and even assist in child-rearing through wet nursing, the Black female body has been exploited and commoditized for the benefit of seemingly anyone but its owner. Black women and female-bodied people still face violently oppressive and exploitative realities today as misogynoir from both within and without Black communities enacts insidious control on their movements, freedoms, and modes of social and sexual expression.

Though the conscious cinema of Bill Gunn arguably resists a harmful depiction of Black female sexuality, it’s still valuable to situate Ganja’s bravado-laden disposition within this historical context. There is transgenerational trauma linked to this legacy of subjugation: the constant threat of ruthless conquer and exploitation holds weight in the Black imaginary and has bearing on the way Black bodies move and take up space. The development of a temperamental defense in order to maintain boundaries makes sense; in fact, this particular psychic space has been theorized about as the birthplace of sass, which the Blaxploitation heroines of the ‘70s brandished so expertly. In this light, Ganja’s every quip is an act of assertion, a staving off of domination. Knowledge and memory are held in both the mind and body, constantly in dialogue with each other. In thinking about the vampirism targeted at Ganja’s body as a type of consumption – a reasonable connection given the lore of the vampire’s bite – we can understand where the threat of physical and mental subjugation might enter Ganja’s lived experience and breed a sort of anxiety in her intimate relationship with Hess. Such hypervigilance would appear to be well-founded: Ganja’s equilibrium is compromised in service of Hess, who selfishly subjects his lover to his same vampiric fate in a bid to secure companionship.

The space where desire and consumption meet is a delicate one. Vampirism itself presents a logically consistent example of consumption wherein satisfaction of the signature blood thirst is a very literal means of sustaining an identity[1]: failure to sate the craving typically results in some form of dysphoria. In the film, Ganja’s sexuality is inextricably linked with consumption and control: her romantic and sexual encounters are also the spaces in which the physical acts of vampirism take place, differing from the experience of Hess who is depicted taking victims in a variety of situations.

In the end, Ganja does not turn to the church and repent alongside her lover who has grown exhausted and disillusioned with this predatory reality; she chooses instead to secure for herself a future that does not include Hess as her patriarch. In a world where the Black woman and the Black female body exist in stark vulnerability, the founding of a new world order in which her own impulses and desires are the dominant ordering principles resembles a radically new kind of freedom. It’s precisely because Ganja has so much to gain from her new vampiric reality that she’s able to endure its brutality, and even lean into it.

On toxic masculinity, bell hooks famously writes that patriarchy demands first and foremost that men “engage in acts of psychic self-mutilation, that they kill off the emotional parts of themselves,” lest they remain prone to a parallel maiming from other patriarchal men. Scam, as it goes, or be scammed. It would seem that Ganja is privy to these mechanisms; she sees the patriarchal order for what it is and, detecting a tear in its fabric, leaps to claim the newly unfixed power for herself to circumvent the conditions of her own subjugation. In mimicking these masculine survival tactics she effectively becomes the master of her own domain, subverting both her mortality and her existing personhood. Ganja chooses to cast off her own inclination toward empathy and live within a newly emotionally-bereft condition where her impulses reign supreme and the bodies and lives of others are disregarded beyond their capacity to serve as means to her carnal satisfaction. Power at a cost, to be sure, but power nonetheless.

Perhaps our heroine is not crooked, then, but tired. In the emerging paradigm, she enacts her vampiric patterns of consumption with more intensity as a means of expressing a new, all-powerful identity. The film’s final image of a nude man emerging from the water below and running wildly towards her, blatantly virile and willing, gives us a glimpse into the new reality Ganja has birthed. Alas, Ganja Meda is coming for hers; she’ll take it in blood.

Lydia Ogwang is a writer and editor based in Toronto. She currently serves as contributing editor at cléo, a journal of film and feminism. You can find her on Twitter at @lydiaohh.