Marcus Daniel asks – who needs Steve Bannon when you have Hillary Clinton and John Kerry?

Steve Bannon’s vision of a white nationalist wave sweeping Europe is showing signs of trouble, with the realisation that his campaign techniques may not only be toxic  but also actually illegal in many of his targeted states.

But who needs Steve Bannon when you have Hillary Clinton and John Kerry echoing the talking points of the far-right in the Guardian, the supposed last bastion of liberal media? Here’s Clinton, discussing so-called “populism” in Europe:

“I think Europe needs to get a handle on migration because that is what lit the flame…I admire the very generous and compassionate approaches that were taken particularly by leaders like Angela Merkel, but I think it is fair to say Europe has done its part, and must send a very clear message – ‘we are not going to be able to continue provide refuge and support’ – because if we don’t deal with the migration issue it will continue to roil the body politic.”

In common with Bannon’s acolytes, Clinton conflates migration with asylum and indulges in what can only be described as victim blaming – those most affected by the rise of the far-right are to be penalised due to the need to appease racists and Islamophobes.  She also appears to have forgotten her tenure as US Secretary of State from 2009 to 2013, as if people fleeing from death and conflict in Afghanistan, Iraq, Syria and Yemen are absolutely nothing to do with her. To refresh her memory, here’s Clinton admitting that the USA had funded the very same terrorists they are now at war with.

Clinton’s successor as Secretary of State, John Kerry, echoed her comments in a discussion about the impact of climate change in London:

“Europe is already crushed under this transformation that is taking place due to migration…imagine what happens if water dries up and you cannot produce food in northern Africa. Imagine what happens if Nigeria hits its alleged 500 million people by the middle of the century … you are going to have hordes of people in the northern part of the Mediterranean knocking on the door”

The language is the kind familiar to any far-right literature or conference – Crushed, Hordes – and with a bonus reference to population growth in Nigeria, a popular topic with eugenicists worldwide. It’s worth noting that in his tenure as Secretary of State, John Kerry was a keen supporter of Saudi Arabia’s war in Yemen.

What’s more troubling – but not altogether surprising – is that these comments caused very little in the way of media waves. Instead of than breaking down their myths and taking them to task on their inflammatory language, it’s  a case of  nothing to see here, just more centrist politicians bringing the rhetoric of the far right into mainstream politics.

By taking a view on asylum and migration from a pan-European standpoint, Kerry and Clinton appear to subtly and subconsiciously endorse Steve Bannon’s plan to unite far-right movements across Europe: the great white nations, uniting against the brown and black hordes, when in fact of the Top 10 countries accepting refugees, none are in Europe. Paradoxically, they attack Bannon while reproducing his bile.

The UK has of course been at the forefront of the rightward drift of political discourse, with our old friend Tony Blair appearing to support Clinton and invoke the old “legitimate grievances” about immigration, despite the fact the UK has taken a comparatively small number of refugees, has falling numbers of people seeking asylum, and faces chronic staff shortages in sectors such as teaching and the NHS.

As Theresa May implemented her racist “Go Home” vans and the “hostile environment” policy which infamously led to the Windrush scandal, Labour under Ed Miliband astonishingly tried to position itself further to the right on migration, attacking the government on its failure to meet the net migration targets of under 100,000 per annum. This culminated in the infamous “Controls on Immigration” Mug during the 2015 General Election Campaign. While under Corbyn and Abbott, Labour has changed tack on immigration, the damage has very much been done. 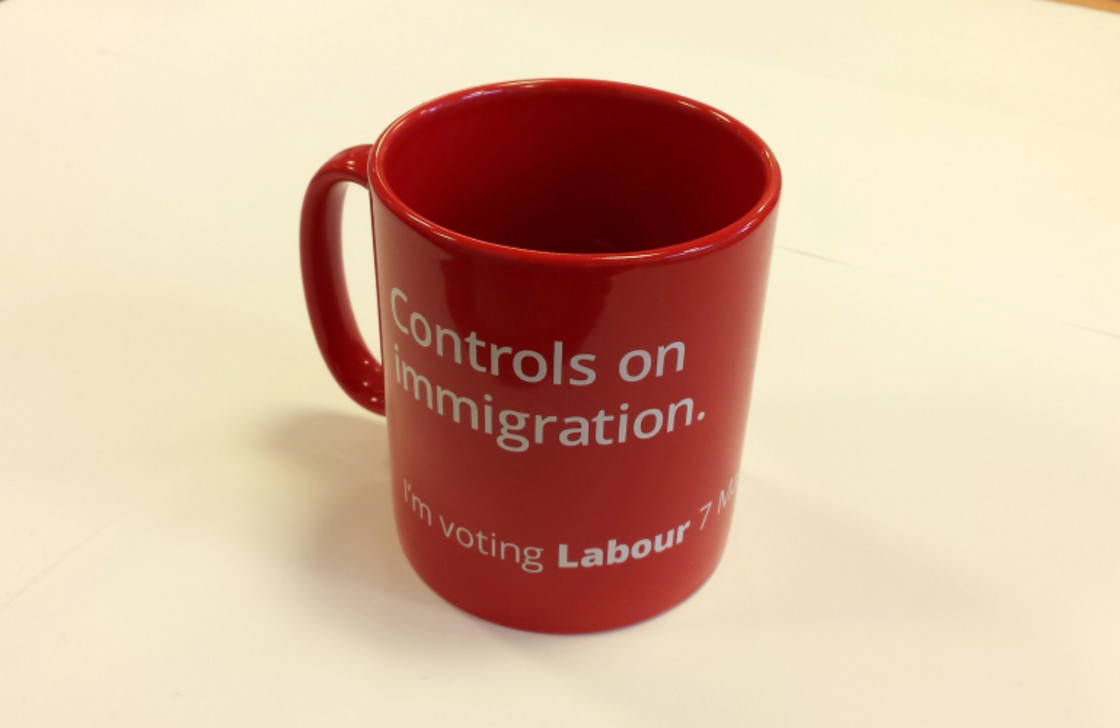 This is an abject failure. A dangerous, and ongoing one.

A failure to challenge the far right and capitulate to their worldview, putting a friendly face onto their sinister ideas in the hope of winning votes. A failure to support migrants and people seeking asylum, and those of us who are related to them. A failure to recognise that the working class includes people of colour, and disproportionately so. A failure to do the hard work of anti-racism in policy and institutions.

Steve Bannon faces protest and calls for no-platforming as he brings his white supremacist roadshow to Europe. But with centrist politicians adopting far-right talking points without robust challenge, our protests are futile and possibly misdirected. As we have seen with the UK and Brexit, the far right doesn’t need to be in power to win. It just needs cowardly centrists to be their mules.

One thought on “Centrist politicians – cowardly mules of the far-right”