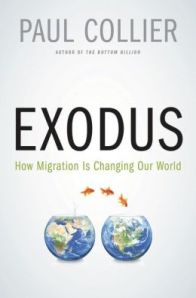 In Exodus: Immigration and Multiculturalism in the 21st Century, Paul Collier aims to chart a nuanced course between what he identifies as two extreme views of immigration: “popular hostility” to migrants, tinged by xenophobia and racism; and the view of business and liberal elites that ‘open doors’ are both economically and ethically imperative.” He situates himself as the pragmatist in the middle: Migration is a fact, he says, and

“it is not a question of whether migration is good or bad, but how much is best?”

To this end, Collier puts aside current economic evidence on migration, dismissing these tools as too blunt to get to the heart of his question, but employs moral arguments and some social science to examine the idea of accelerating migration and what implications this has for the future – in his mind, a post-national society with rootless people abandoning poor countries for rich ones, damaging both host nations and the countries they leave behind.  Part of the problem with his book is that some of his most sweeping statements, which he later asserts to be fact, are actually just speculation. While his question is indeed a different approach to the issue of migration, in fact, many of his theories are predictably familiar and contested at that.

So are his methods: the book opens and closes with references to his family’s own migrant experience, a technique familiar to anyone who has listened to a politician discuss immigration in the last few years. It’s a variant of the Black Friend defence: ‘I’m not racist because I’ve got black friends’ – in this case, I’m not prejudiced about immigrants because I have migrant roots.

As usual, this serves two purposes; firstly, to reinforce the “deserving” and “undeserving” migrant narrative: Collier’s ancestor, the European migrant fleeing oppression in Europe who settles in Britain, serves in the War, and whose descendants later change their surname and integrate, becoming truly British – and the rest, invariably people of colour, who come from countries with “dysfunctional social models” and who cluster in a Diaspora without trying to fit in to British society.

Secondly, the technique is used to offer a fig leaf of cover before he makes a contentious claim. For example, Collier’s claims that in “clan-based societies” such as Nigeria, violence and vendettas are common and there is lack of mutual regard and trust, which is not conducive to the co-operation necessary for a modern, prosperous society:

I find Nigeria exhilarating and vibrant; people are engaged and witty. But Nigerians radically, deeply do not trust each other. Opportunism…is now ingrained in ordinary behaviour.”

It is because of this sort of opportunism among Nigerian doctors faking death certificates, Collier proposes, that Nigerians cannot get life insurance in their country.  He goes on to ask if a large influx of Nigerian doctors to the UK, if they refuse to “adopt the norms of indigenous doctors” could lead to a similar problem here. Collier accepts that this has not happened, but justifies this train of thought:

I am not assessing past migration: I am trying to infer from relationships observable today the possible consequences of continued acceleration.”

This tactic is deployed repeatedly throughout the book, as Collier first puts forward a contentious claim to justify his overall thesis that multiculturalism is not good for society, then explains away his lack of evidence as an invitation to “provoke specialists to research” –  but he can’t have it both ways. Collier adeptly sets up up his own terms of discussion claiming that often race is conflated with poverty and culture, making immigration a hard topic to discuss, but then proceeds to take an ahistorical and problematic view of both. 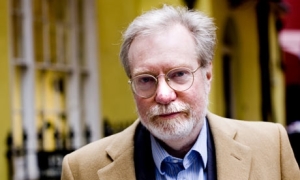 Exodus examines the effects of migration for the society left behind, the host society and the migrant herself. However, in putting forth a moral case for immigration controls to stem the brain drain from poorer countries he overlooks the relationship between these controls and inhuman tragedies such as the deaths of Africans in boats attempting to cross the Mediterranean Sea, for example. This is what I like to call “concern trolling” – Collier is concerned about the effect of outward migration on poorer countries, but does not examine, for instance, the effects of post-colonial policies that have often propped up dictators or authoritarian governments for the sake of ‘stability’ – regimes that drive people from their homelands. Nor does he examine how the expatriate community, primarily from rich countries, is propping up the aid industry in the developing world. He does not address the migration of people in any other terms than the “acceleration” of migrants to rich countries such as the UK. Although he expresses concern about the effect of migrants from countries with “dysfunctional social models” on the UK, he does not examine the relationship between poverty in these countries and, for example, the dysfunctional tax affairs of transnational corporations, many based in rich countries, who profit from cheap labour and may not pay their share of tax. The migrant is portrayed as enjoying “a free lunch” and embedding herself in the Diaspora in her host country, to the detriment of indigenous society. The Diaspora, meanwhile is viewed unfavourably through a selective interpretation of  events such as the protests surrounding the shooting of Mark Duggan, the 2012 London Riots and the 7/7 bombings.

The book closes with a focus once more on Collier’s ancestors, in particular the one who faced a choice between clinging to “an affectation of difference” or embracing a new, British identity with the name Collier. It struck me that throughout Exodus, this was the only migrant narrative that was humanised, whereas the Diaspora, as envisioned by Collier, was always “other”.

Kiri Kankhwende is a Malawian writer living in London with an eye on Southern Africa. She has a background in human rights campaigning and is interested in immigration, politics and theatre. Can be found blogging at Madomasi and tweeting @madomasi