From two single beds and a spotlight bright enough to crochet beneath, we would watch Bollywood films, my aunt and I, in the bedroom we shared in North London. There were, within each film, similarities to my own Turkish upbringing; a crossover of words, appearances and plot-lines worthy of less-accessible Turkish cinema. It kept my attention. Characters who became somehow relatable in otherwise white surroundings. Clearly, I craved it. And in no way would a Turkish, or Middle Eastern character in a popular television show (had there ever been one) have been “exploitative” simply for existing.

It is easy to wonder why those who are not white cannot connect as readily with white characters if it is your identity that has systematically monopolised standard templates for fiction i.e the go-to-white-guy. Perhaps this was Mathew Klickstein’s problem when his interview with Flavorwire took a turn for the absolute worst. Promoting Night of Nickelodeon Nostalgic Nonsense! for which he was event moderator, the resentment for a pitiful handful of TV characters who were not white, took grip and dominated a horrendous read. “That show is awkward,” he said of Sanjay and Craig, “because there’s actually no reason for that character to be Indian.”

That marginalised communities are counterpart in his mind to otherworldly beings is to be expected. It’s hardly original on the spectrum of dumb-racist-shit to say. You are, as a person of colour, unfamiliar and in turn fascinating for being so. Shows must be about this. Never must you be seen unless it is to permanently remind how different you are, how strange.

The message is crystal clear: people of colour cannot acquire relevance unless it’s to entertain and educate (in equal measure) white audiences. Alien to societal norms, it is only via commenting within the limits of race that exceptions can be made.

Bizarrely, Klickstein goes on to liken ethnically diverse shows to blackface. The article is worth reading simply for the endless slurs, references to “token black”, and an assertion that white people work on shows because the best people for shows are (wait for it) white.

“There are worlds where white guys get shit too,” Klickstein whines. “I’m starting to do stand-up comedy now and it’s hard to go up there and talk about how hard it is to be a guy. People don’t wanna hear it! A girl can go up there and talk all she wants about how hard it is to be a girl, and she gets applauded.” I’d hazard a guess that Klickstein has exclaimed, “That’s reverse-racism! Stop being sexist to men!” at least nine times this month. A suggestion, perhaps, for a good opener when he next does stand-up: “Have you heard the one about People of Colour exploiting TV shows by being on them?” No, neither have I.

Editors add: In ill-advised ‘this week in twitter racism’ the Netflix account saw fit to send out this tweet to promote something or other Chelsea Handler is doing (we haven’t looked into exactly what it is because no doubt we won’t be watching it.) 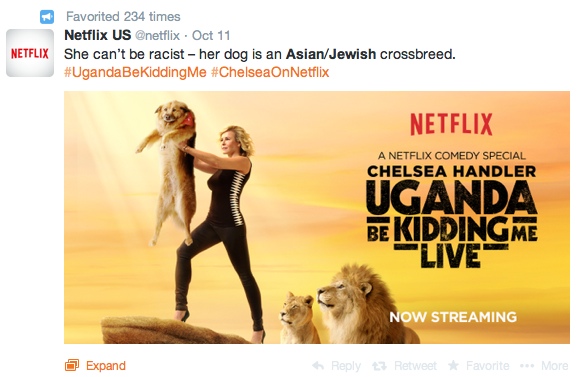 This response by @ShrillCosby made our day however, though maybe it’s Black Jesus that Netflix needs.

Column by Chimene Suleyman dissecting whatever condescending, overconfident, oversimplified or just plain inaccurate missive that makes up ‘This Week In Whitesplaining’

Chimene Suleyman is a writer from London of Middle Eastern / Turkish heritage. She writes opinion pieces, contributing to The Independent as well as regularly featured writing for online blog and events organiser Poejazzi. She has represented the UK at the International Biennale, Rome 2011 with spoken word. Her poetry collection “Outside Looking On” published by Influx Press is out now. She collects photos of Canary Wharf. Find her on Twitter: @chimenesuleyman

One thought on “This Week In Whitesplaining: Kids TV”