I almost didn’t watch it. Robb Leech’s BBC3 film ‘My Brother the Islamist’ aired last week. Its purpose was to reconnect Leech with Rich, his stepbrother and a convert to Islam who would later be arrested for attempting to join the Taliban.

The programme, to be fair to it, attempted to take a sensitive approach, but was misguided nonetheless. In a follow up article for the Guardian, Leech writes of Rich and radical Muslims like him: “In a former life, the world they had been brought up in had wronged them. Perhaps they had family troubles, or maybe society shunned them, whatever it was, they resented it – they were lost, empty and had no stake in the western world. Becoming a radical Muslim reversed the polarity.”

On some level, Leech is right. Many Muslims experience a world that presents suspicion ahead of natural rights, a spectrum of maltreatment that ranges from daily provocations to the horrific and endless bombing of their home countries. And yet there was no programme about this. There was no exploration of drone-dropped towns, men and women who have lost so many and so much. It was not their rage or voices we were hearing. Merely a centering of white men with hurt feelings. The perpetual whimpering of the otherwise entitled who felt short-changed.

If I’m honest, it felt appropriating. An attempt to politicise and legitimise their annoyance at the world without presenting it simply as the huffiness that it is. Once the borrowed rhetoric of political struggle is removed you may as well be left with the slammed door of angsty muttering: Nobody understands me, nobody understands me.

Though Leech’s intentions were not sinister, there was still a cynical perpetuating of myth that surrounds the religion. Had Leech’s brother joined the British army or voted Tory, for example, would any exploration of their (hypothetical) differing military or political views be needed to understand each other as siblings? Instead here was an othering steeped in Orientalism. One that could not shake at any point the idea that Islam is somehow inherently flawed, no matter how sympathetic Leech was to ‘why’ this may be.

Where were the Muslims who reflect more accurately the religion? Where were the celebrations, kindness, or family-life that is far truer of his brother’s new religion, instead of an aggressive minority who it has suited the West to let hijack the image? After all, the programme was not called ‘My Brother the Radicalist’. 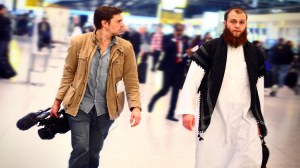 The Islamophobic tropes continued: “Lets not forget,” Leech writes, “that dying a martyr is like hitting the afterlife jackpot.” And yet as someone who has many a martyr in my family, most notably my grandfather, it has never once felt like cashing in. Of course Leech is just going on what radical Islam has said. Though looking back, I don’t think I have ever heard this belief of the afterlife from anyone who is actually Muslim. Rather it’s an aspect of the Islamophobic rhetoric of Western governments, policies and media.

But of course it is this kind of rhetoric that men like Rich are immersed in ahead of any organic upbringing within the religion itself. An affiliation with a new religion doesn’t remove the privilege of one’s race, nor does it alter the misinformation presented by the community they previously belonged to.

That Leech’s brother, and men like him, are attracted to Islam for its ‘anti-West stance’ says more about them than it does the religion. The support for it is frankly irrelevant. To view the religion as one that is focused so violently on the West, to perpetuate the idea that it is death-fuelled and toxic, belongs not to the religion, but to the innate Islamophobia of the West. ‘My Brother the Islamist’ did not shed light on fundamentalist Islam, but instead how unable the West is to remove ‘terror’ from their understanding of it. Even when they are converting to it.

Chimene Suleyman is a writer from London of Turkish / Middle Eastern heritage. She writes opinion pieces, contributing to The Independent as well as regularly featured writing for online blog and events organiser Poejazzi. She has represented the UK at the International Biennale, Rome 2011 with spoken word. Her poetry collection “Outside Looking On” published by Influx Press is out now. She collects photos of Canary Wharf. Find her on Twitter: @chimenesuleyman

3 thoughts on “This Week In Whitesplaining: ‘My Brother the Islamist’”