‘Just over a month ago, 500 people drowned off the coast of Malta. As the International Organization for Migration describes, “two survivors reported that smugglers deliberately rammed and sunk their ship when migrants refused to board a less seaworthy vessel…there were only 11 identified survivors; witness reported that as many as 100 children were on board.” The Foreign Office minister Baroness Anelay announced “We do not support planned search and rescue operations in the Mediterranean”

It’s about the “pull” factor, apparently. In a political climate in which immigration is portrayed as a problem and a crude numbers game, keeping the numbers down is the only solution. Diverse migrant and refugee journeys get reduced to a simple equation of push and pull.

Pull: explaining the government’s decision to no longer support search and rescue operations in the Mediterranean for thousands of refugees and migrants who have chanced a crossing from North Africa in unseaworthy and overcrowded vessels, Lady Anelay said that the rescues created “an unintended ‘pull factor’, encouraging more migrants to attempt the dangerous sea crossing and thereby leading to more tragic and unnecessary deaths.”

She also said that the government will focus on countries of origin and the people traffickers who facilitate the crossings – which is all well and good – but in the meantime? Let them drown. How did we get here? Politicians of all parties parrot the well-worn line about Britain’s “proud tradition” of offering sanctuary to those fleeing persecution, but talk is cheap; it’s what you do that matters. And what Britain is proposing to do, in withdrawing financial support for the search and rescue operation in the Mediterranean, is to condemn thousands to a watery grave.

Push: if saving people from danger is a pull factor, what about the push factors? What drives men, women and children to place their lives in the hands of traffickers and risk a journey that may cost them their lives? According to the UN, an estimated 150,000 people, primarily from the Horn of Africa and Middle East, have been rescued by Italian ships over the past 12 months. Most come from Eritrea, Syria and Mali, departing from North Africa -mainly Libya, in ever increasing numbers, fleeing oppressive regimes, war and poverty. By July this year, more than 75,000 refugees and migrants had arrived in Italy, Greece, Spain and Malta – compared to 60,000 who made the same journey in the whole of 2013 and 22,500 who arrived in all of 2012. Many of them are children.

If there is a pull, it’s towards safety and freedom. The government’s decision to stop helping those in immediate danger may not necessarily be a vote winner, but the government certainly feels it won’t do it any harm to take such a hard line. This is small politics that diminishes us all. With every party rushing to ape UKIP, immigration is already a major theme of the election campaign. Meanwhile, the Conservatives are agitating to withdraw from the European Court of Human Rights. It’s easy to denigrate human rights when by and large, yours are protected. The migrants and refugees in the Mediterranean risk death on the water in search of the freedoms that we take for granted.

Last month, Natacha Bouchart, the Mayor of French port town Sangatte, told the Commons Select Committee that people were willing to die to come to Britain for the generous benefits regime, another “pull factor”. Contrary to what Bouchart says, the reality for asylum seekers is not easy. Asylum seekers are not able to work and the level of support they receive has been frozen since 2011 at around £5.23 a day. Refugee Action’s Bring Back Dignity campaign is pushing for an increase in the payment so that asylum seekers do not have to live in poverty. That’s if you are able to claim asylum. By August, Britain had only resettled 50 Syrian refugees, one of the nationalities that tops the numbers in terms of Mediterranean boat arrivals. In the midst of a global refugee crisis it is developing nations who are stepping up to the plate, offering shelter to people fleeing war and conflict – Turkey, Pakistan, Lebanon and others.

As long as our government sees this as a border enforcement issue, rather than a humanitarian crisis, it overlooks that fact that we are implicated in the suffering of vulnerable refugees and migrants as part of Fortress Europe, a policy that makes it difficult to seek entry through legal routes and drives vulnerable people into the arms of traffickers.

Campaigners are pushing back. On 6 November, campaigners, charities and concerned citizens protested outside the Home Office as part of the #Don’tLetThemDrown campaign. 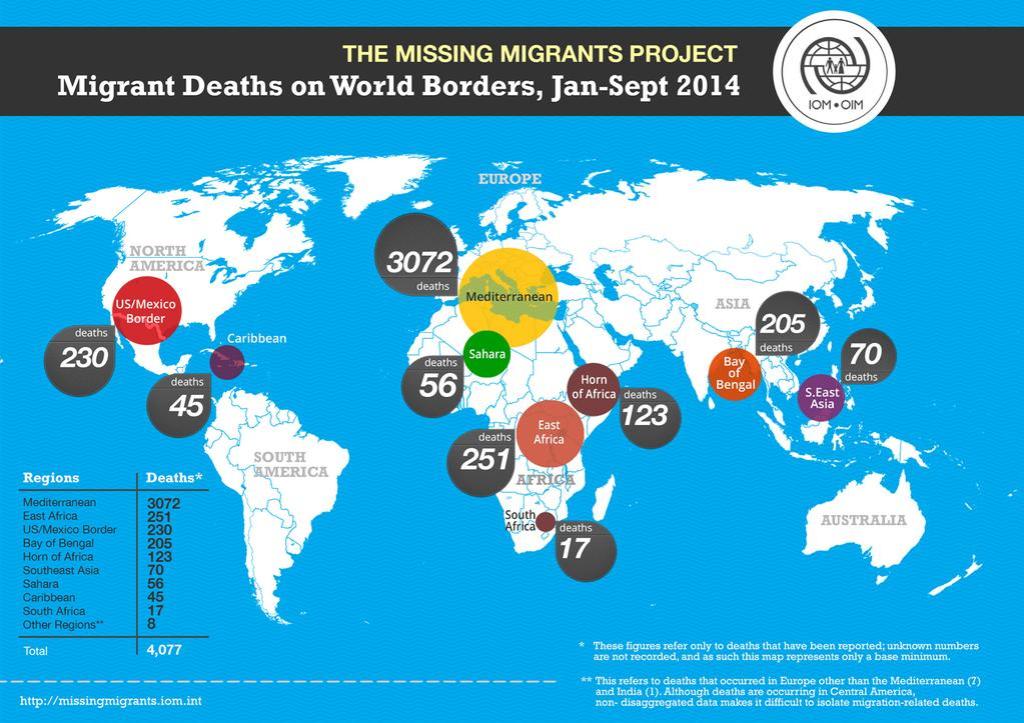 There are no exact figures for how many have died making the deadly crossing to Europe. Their names are unknown; there are no graves to mark their loss. When 300 migrants and refugees died off the coast of Lampedusa in October last year, there was collective horror, but nothing changed. Instead, the government wants to roll back the operation that is saving lives. Yes we do have to tackle the situations pushing people into such desperate circumstances, and the traffickers who profit from their misery – but in the meantime, we cannot let them drown to score political points. Valuing their lives so cheaply diminishes our collective humanity; it puts Britain to shame.

Kiri Kankhwende is a Malawian journalist and blogger specialising in immigration and politics. She has a background in French and Chinese language studies and holds an MSc in International Political Communications, Politics and Human Rights Advocacy. An accomplished public speaker, she has also written for the Guardian and the Independent, and been a contributor on BBC TV and radio, Al-Jazeera and Fox News, both as a member of the Media Diversified network and in her role directing media advocacy for CSW, a human rights charity specialising in freedom of religion and belief. Twitter: @madomasi