Recently, a friend asked what makes someone a ‘person of colour’. For many White people and for many people of colour too, the term can seem strangely ambiguous. The ongoing refugee crisis has seen thousands of displaced people trying to enter Europe from the Middle East or East Africa adding yet another dimension of complexity to race politics.

My friend argued that people of colour can only be Black or Asian because Levantine and Middle Eastern people could in places pass for White, if Whiteness was simply measured by skin colour. He remarked how many Syrians had blonde hair and blue eyes; the same went for Northern Afghan, Lebanese and Palestinian groups. He mentioned how half of Turkey was geographically in Europe and its history with Greece, then claimed Cypriots consisted of either Greeks (from Greece) or Turks (from Turkey), refusing to acknowledge them as a densely heterogeneous race.

Incidentally, a case study was carried out in 2014 to test the genetic profile of 120,000 ‘Greek’ Cypriots and 20,000 ‘Turkish’ Cypriots. Of those examined only 23% of ‘Greek’ Cypriot DNA could be traced back to Greece, with people having stronger genetic links to Sicily, Iran, Turkey, Palestine, Syria, Armenia, Saudi and Syria.

As a White upper-working class heterosexual male my friend has never had to navigate his Whiteness along with the privileges it affords him. One of the vital components of White supremacy is keeping its beneficiaries oblivious to its authority whilst simultaneously asserting the unfounded notion of equality. White supremacy is defined as a systemic form of racism, one that believes itself to be superior in religion, intellect, culture and history when compared to those of a non-White race. To reference White supremacy is not to suggest all White people are inherently racist, but to identify the omnipresence of a damaging ideology that affects both Whites and non-Whites.

Equal opportunity forms ask people to specify their ethnicity yet fail at being inclusive. I myself am not White, nor am I Black or Asian. I am not mixed-race either – that’s if mixed-race is assumed as being half African or Asian and half European. I am Cypriot so throughout my life I’ve had to tick ‘other’. On paper I’ve always lived among a race of ‘others’. In 2011 British Arabs were officially recognised in the UK census but still not many forms feature the option. Another misleading point here is that aside from the Arabs of Arabia there is no such racial group with the association being more linguistic; however, it’s become an easy point of aggregation.

I’ve had numerous conversations with Iranians, Cypriots, Lebanese, Turks and some North Africans who regard themselves as White. The reasons aren’t necessary linked to their skin pigmentation or even their country’s geography, but rather to not being Black – they have no other option but to call themselves White.

Western racial classification has always revolved around a capricious and arbitrary logic. Ancestry was once used to drive racial slavery. The one-drop rule saw that any member who had at least one person in their lineage of African descent (one drop of Black blood) would legally be considered Black. Hitler measured the noses of Jews while other groups like the Sami of Northern Europe would be distinguished by language. Over the last thirty years that logic has shifted again to forge the current binary regard many hold for the self-identification criteria, yet it’s a particular kind of Whiteness that is being imagined by those looking to see where they fit around the Black-White nexus. A key feature of the non-White/White anxiety is the psychological implication of being made to feel perennially ‘other’. If within a White dominated society the very thought of being affiliated with ‘Blackness’ leans towards a pervasive history of oppression, social and economic disadvantage, police harassment and brutality, then the desire to run away from that narrative becomes even greater. The racial stratification in North Africa, a byproduct of Arab colonial history, also plays a huge role in drawing distinctions between Arabs (White) and Africans (Black) but then those roles are transformed when both groups enter Europe.

Symbolically the colour white has always been attributed to ‘the good’. In Kenneth N. Addison’s book We Hold These Truths To Be Self Evident, he demonstrates how Shakespeare was partly responsible for denoting the word ‘fair’, while other historians such as Nell Irvin Painter in The History Of White People  suggest that references to light and dark predate the symbolism of the Judeo-Christian religions. As mentioned previously, the way Whiteness is assessed has shifted significantly over the last 500 years. When German physician J.F Blumenbach coined the term ‘Caucasian’ in the 19th century, he used the cephalic index and the science of anthropometry to identify the Caucasian race. Initially these taxonomic groups had little to do with skin tone and more to do with location. The Caucasian race spanned all of Europe and North Africa along with Central, Western and Southern Asia but as British, French and American imperialism worked its way around the globe new classifications were put into place to define the proverbial other.

Developments in biological anthropology and genealogy can also now prove how humans share 99.99% of their DNA and it’s only the mitochondrial element (mitochondria is a cell’s chemical energy proponent) that differentiates us. Still, it’s easier to focus on our dissimilarities as they appear far more immediate allowing for skin colour to be used in the political agenda of divide and rule.

The Racialisation of Islam: 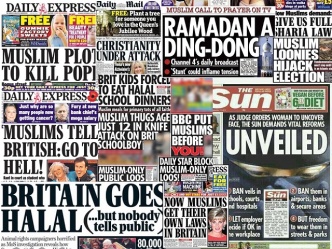 Since 9/11 there has been another noticeable shift. The racialisation of Islam has been inspired largely by fascistic politicians like Donald Trump and right-wing activist groups such as the EDL who, along with the tabloid press, refer to Muslims as if they were a race rather than a faith group consisting of many disparate races. The need to manufacture the idea of a central enemy and instill fear into Brits and Americans means these groups erroneously limit this ‘race’ of Muslims to those who are descended from either the Middle East or Pakistan. Never is there a mention of Southeast Asian Muslims or White European Muslims from Bosnia or Chechnya, or those who converted to Islam from other European countries.

In the hyper-racialised climate of the 21st century there is a more insidious effort to repress foreign cultural values and belief systems than ever before. Some argue xenophobia is at the helm while others suggest racism; although the two terms are used interchangeably, they do have relatively distinct meanings. Racism is more physical with the focus being to irrationally discriminate against a person exclusively because of physical features the racist believes to reflect an inferior race. Xenophobia is more intangible in that it fears the assumed threat of a foreign group’s cultural values and practices overriding its own.

To say Whiteness is a complexion-based specifier is unwise. Albinism would deflate such an argument, as would a melanin study of southern Europeans. The colonial histories of the Levant and the Middle East all bear the cultural and physical hallmarks of a European, Asian and African presence, as is clearly reflected in the composition of the people. The geopolitics of a nation should also be seen as separate from a nation’s peopling – Cyprus is a prime example of this.

You Look White To Me:

The final argument would say that if any individual from a racial group appears White or light enough to a White person then they are, in effect, White as the privileges reserved for White people could then be gained by them. Italian Americans along with the Irish faced various degrees of systematic persecution at the hands of the British and American establishment, and yet it was their perceived Whiteness that eventually allowed them to assimilate into society. It’s also important to draw distinctions between Whiteness as a sociopolitical characteristic and as an aesthetic. When white-skinned Europeans tan their skin the intention is never to lose their political Whiteness but rather to appear more desirable and vigorous. Similarly, a number of Eastern nations still associate light skin to nobility and wealth – remnants of a caste system introduced by Indo-Aryans around 1000BC.

There is no resolute answer to solve the ongoing quagmire surrounding racial classification. From what’s been presented it’s clear the current framework is as mercurial and flawed as the very idea of race itself. What I hope is clear is that origin exceeds complexion and to assume someone originates from a particular place simply because of how they appear is to deny all the dormant complexities of slavery, colonialism, war and persecution. We are not fixed archetypes so until we learn to see race and colour in a more nuanced light then the need to keep explaining away our Whiteness, or our Blackness or our Otherness, will endure.

Anthony Anaxagorou is an acclaimed British-born Cypriot writer of poetry and fiction. He’s the writer-in-residence at several secondary schools around London and works closely with children in care, prisoners and refugees. He’s published eight books of poetry, a collection of short stories and a spoken-word EP while having also written for theatre. In 2012 he founded London’s Out-Spoken night for poetry and live music and their sister publishing house Out-Spoken Press. Visit his website anthonyanaxagorou.com. Find him on Twitter @Anthony1983

This article was edited by Henna Butt

2 thoughts on “Among A Race Of Others: An Overview Of Western Racial Classification And Colourism”