Tomorrow will mark a year since three-year old Alan Kurdi’s body was washed up on a beach in Turkey. He drowned in the Mediterranean sea during his family’s attempt to seek safety after fleeing their home in Syria. A picture of his lifeless body face down in the sand was on the front pages of all the UK’s major newspapers, even if they’d had played a role in stoking anti-refugee sentiment in the past. Public sentiment seemed to soften towards refugees as people glimpsed the real consequences of Europe’s often cruel asylum system. But since little has changed. People from abroad – whether they’re migrants, seeking a different life or refugees, fleeing dangers at home – are still being treated as the enemy.

Attitudes towards refugees are thought to have hardened this year. In a February Comres poll 41% of people said Britain should accept fewer refugees from Syria and Libya – up from 31% in September 2015. In a climate where right-wing newspapers readily smear refugees as a threat to UK society and right-wing politicians are willing to turn their backs on children seeking asylum, this isn’t surprising. Less than three months ago the man who murdered pro-refugee campaigner and MP Jo Cox, gave his name in court as “death to traitors, freedom for Britain”; the idea that this country is being overrun by outsiders seems to lurk in the background of these words. But the numbers of refugees in need of a home aren’t going away; the number of people displaced by the Syrian conflict is at the highest level ever recorded. 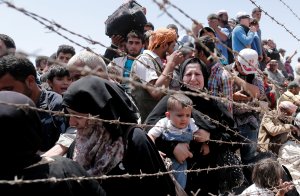 Views of immigrants are also tied up in this equation. Immigration and asylum are, of course, different. The distinctions between them are important. But one isn’t ‘bad’ while the other is ‘good’ (or at the very least ‘acceptable’). Current forms of immigration are the product of an unequal world; nearly half of the world’s population live on less than $2.50 a day. Poor people will continue to move to more prosperous countries in search of security as long as they need to.

And immigrants and refugees are connected through the way in which they’re racially stereotyped. Part of the immigration and refugee debate is insecurity over the racial ‘Other’ polluting British society. A recent YouGov poll asked British people where in the world they would prefer immigrants came from in the future. They found that there is “a strong desire for a reduction in migrants from Eastern Europe, Africa, the Middle East and South Asia. At least one in five people say that the UK should not admit a single migrant from Turkey, Romania, Nigeria, Egypt or Pakistan.” This same polling found that the economic situation of an immigrants’ home country is related to this decision. But so are perceived “cultural” differences and fear over criminality, within this exists the assumption that brown and black people are more likely to disrupt UK society or commit a crime.

Meanwhile the places those polled would rather people emigrate from are mostly distinct in their whiteness: US, Canada, Ireland, Australia, Sweden, Germany, France and Japan. Although these countries aren’t exclusively white, they are, apart from Japan, predominantly so.

If these findings are anything to go by, there seems to be a preference for white immigrants, unless they are from Eastern Europe. This is down to the way people from this part of Europe are racialised in the media; described as ‘flooding’ the country or stereotyped as dangerous criminals. It’s these same ideas that surely played a part in the murder of a 40-year-old Polish man in Essex recently.

Where does all the hate come from? Just pop down to your local newsagent and buy some hate. pic.twitter.com/A8WjUPF6ZQ

There remains, then, an underlying racist sentiment in the immigration and refugee debate, which is inextricably linked to the racism that’s entrenched in UK society. In the days and weeks following the Brexit vote migrants and UK-born people of colour across the country faced harassment and abuse. The racist hate-crimes weren’t limited to immigrants, but also people were thought to not belong because of their skin colour. What’s behind this is the idea of whiteness as synonymous with national identity and belonging.

We’re often urged to have an “honest” conversation about immigration and asylum. But whenever these subjects come up in the media or politics, they’re too regularly made up of factual inaccuracies and racial stereotypes. Alan Kurdi was one of many; countless tragedies and innumerable needless deaths show the callous, ill-judged and racialised nature of the UK’s approach to immigration and asylum.

One thought on “‘Little has changed’: migrants and refugees are still seen as the enemy”