Post-Brexit the pound is worth less than a Jimmy Savile autograph, so we are going to need those gold-hoarding immigrants in Birmingham to stay and float the UK economy. But rather than arguing for a coherent immigration policy, one not based on fear and misinformation, the Labour PLP are having the kind of identity crisis that afflicts a boyband when they hit 21. They are looking admiringly at the space vacated by Farage, Gove and the Vote Leave camp, and have decided to get mucky in the alternative Hard Brexit scene.

Some in the Labour PLP have decided the best way to attain electoral success in 2020 is to spend their time talking about immigration – not in any substantive way, other than to say we need to talk about immigration. Having written off Labour grassroots as Trot infiltrators during the summer, they have decided they will, during autumn, court the demographic who are eager to tank the economy and commit fully to a recession just for a blue passport.

The Labour PLP in a panic have abandoned the argument that crippling ideological austerity by the Tory government and lack of public funding are the main factors making immigration such a controversial issue. 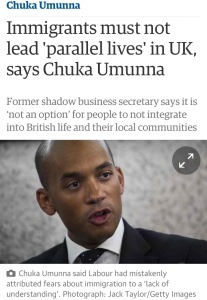 Sticking to the script Chuka Umunna in The Guardian lsays ‘we need to talk about immigration’, singling out the Somali community in his constituency as being insular and not integrating. His only offered solution: they need to learn English, a racist trope visited earlier in the year by David Cameron in his speech in Birmingham. The former Shadow Business Secretary makes no mention of investing in infrastructure and funding services like the NHS, building more homes, schools and other infrastructure. It’s learning English he homes in on, even though funding for ESOL classes was cut by the previous government.

Now I’m not knocking Chuka Ummuna, I mean who doesn’t as a immigrant in the UK want to learn the lingua franca of the world and be able to respond to every shout of “Go back home” when you venture out of your un-integrated area with “no thank you, I’m happily settled into Britain and getting used to the damp and Theresa May.”

In any case Chuka Umunna doesn’t need to worry about the non-integration; gentrification will take care of the isolationist Somali community in Streatham, replaced with integrated housing only the very rich can afford. Forget affordable housing for all, and ideologically driven austerity cuts which impact Labour-run councils five times as much as Tory-run ones and often have the most diverse constituents. 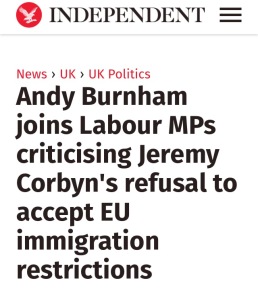 When you strip away the flowery pumpkin spice latte-infused rhetoric, most of what Umunna, Burnham and others in the Labour PLP are advocating sounds suspiciously similar to what the likes of Nigel Farage and the Tory party are advocating. Which begs the question, why bother at all with the scapegoating of immigrants? The demographic who will only accept immigration from the 1950s will not be appeased by English lessons nor will it help in real terms with the acute pressure on services and infrastructure due to lack of investment from successive governments.

If I was the kind of person who preferred economic uncertainty and visa restrictions to Spain just so I can say in the pub that we got our country back, then Chuka Umunna and Andy Burnham’s half hearted attempt to talk tough on immigration just won’t cut it in a post-Brexit world where there has been a spike in hate crimes.

We need on the Left not just to be seen to be talking about immigration, but offering practical solutions. We’ve tried the “350 million more for NHS” and other lies of Brexit; surely advancing the case for investing in infrastructure is a more progressive solution than the dog whistle politics we have seen?

If only the PLP could see as clearly the need to set a progressive agenda on immigration as they do the supposed hard left infiltrators to the party. There are no reds under your bed but there is a need to offer substantive solutions such as Corbyn’s migrant impact fund.

Labour should not be afraid to talk about immigration but don’t have to echo the likes of Nigel Farage and Melanie Phillips on BBC Question Time every other week. The case must be made for a more progressive view and actual solutions that tackle the structural problems that immigration can bring in certain areas of England. What Labour should not be doing is moving to the right in an empty rhetoric arms race with the Tories to appeal to voters that are better catered for by UKIP and a right wing Theresa May government. The migrant impact fund for under pressure councils might be a start.

ll work published on Media Diversified is the intellectual property of its writers. Please do not reproduce, republish or repost any content from this site without express written permission from Media Diversified. For further information, please see our reposting guidelines.